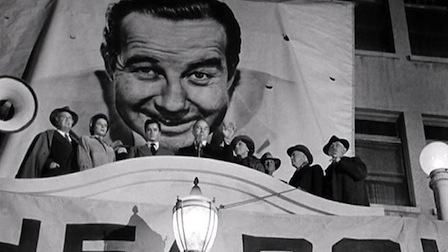 The political machine starts with individuals trying to change the world for the better but the opportunity of corruption and the seduction of power can obliterate even the most positive intentions. All the King’s Men displays this journey as it takes a humble man from the Midwest showing his true character when given an inkling of power.

Willie Stark (Broderick Crawford) always fought for the little guy and pushed against the establishment in the political world, which prompted him to run for office. Through the election process, Stark quickly realizes that the establishment has existed for so long because it can seduce anyone into joining it, which begins his descent into becoming the very thing he fought against for so long.

For a film that came out in 1949, All The King’s Men tells what seems to be a timeless story not only because of its views on politics but how the slightest bit power can corrupt anyone. A viewpoint that takes a more cynical view of the world than Frank Capra’s Mr. Smith Goes to Washington and Meet John Doe. While Capra tries to capture American idealism, writer/director Robert Rossen tears down this fantasy to show the reality of what would occur with giving any man this type of power. It lands with such resonance because Stark represents the everyman and the typical American man in the 1940s. From the midwest looking to do good for others, this type of character would be an inspirational figure in any Capra film, but All the King’s Men posits that any humility will be stripped away joining the world of politics. It made sense then and certainly remains true in the 21st century.

Stark represents the political force of a populist movement. Seeing that trend carry on in recent elections shows that the person with the microphone becomes the most powerful person in the room. Having that voice can galvinize others, especially when speaking on things the masses want to change. Once one has gathered a base and a certain level of fame, the ferocity that comes with that adoration will allow that person to get away with murder. That’s what happens with Stark and imposing his will on others to get anything he desires. It becomes tempting for him, because never in his life did he receive this much attention or a group of individuals surrounding him willing to please all of his needs. Stark doesn’t even hesitate when given that power and subsequently negatively impacts nearly every person that has some connection to him.

Speaking of those individuals, all of the characters around Stark represent the system trying to uphold what gives them power. Jack Burden (John Ireland) serves as our entry point into this world. With his work as a journalist, he helps Stark reach the heights of winning the seat of governor and witnesses the slow demise of the political figure. It speaks to the complicity of these individuals around someone who no longer represents the positive values that kickstarted their political campaign. Jack slowly has his morals deteriorate throughout the film, as it shows how far he will bend to ensure he continually has access to Stark, thus granting him power. It makes for a murky set of characters to follow because none of them fit into the classic hero mold that dominated early Hollywood productions. Stark quickly shows his true colors, but all of the other characters fall in line until they personally get impacted by his tyranny. This happens with Jack but also Stark’s campaign manager, wife, and mistresses. Each of them stays on the ride for a bit longer than they should and suffer the consequences.

These consequences hit others far sooner than it does Stark because he holds the microphone and has his face stamped on all of the posters. As long as Stark stays in line, he has the opportunity to get away with unchecked power, which leads to the abuse of others in his life. It shows the tragedy of his son and the actions he commits in the film, as it shows that Stark no longer has the compassion we believed we had when first running for office. Even when certain crimes occur, he gets the proper cover-up to protect himself. For someone seeking to change the political landscape of America, he quickly finds out that keeping the status quo has its benefits. He surely enjoys those benefits but he then sets his eyes to be more and once he attempts to usurp those that gave him power, it starts his eventual decline. The power lies in the status quo and Stark’s hubris eventually puts an end to his run with no allies left in his life.

This story’s relevance still shocks me because not much has changed in the political landscape of the United States. Even those who claim to be outsiders quickly conform to “the way things are done.” An unfortunate reality, but the one we all live in. All the King’s Men handles this type of cynicism in such a brutal and necessary way. Capra’s optimism may show what this country could be at its best, but this film shows the murky and ugly reality. We’ll never have that idealistic world because too much money and power comes tied to these political positions and it becomes far too advantageous to take the benefits and stay in line rather than affect actual change.