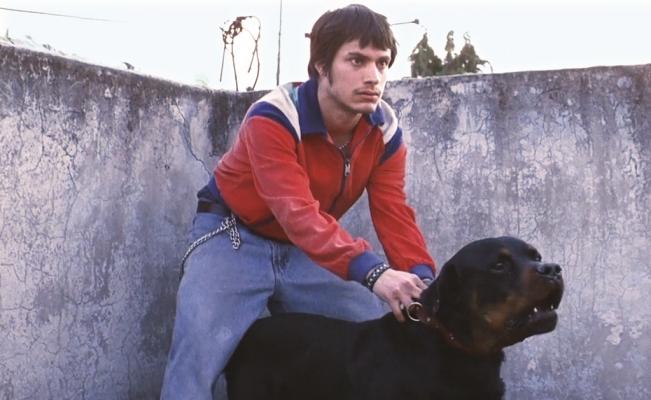 The title of this film translates to “Love is a bitch” and after the events that transpire in the story, it’s hard to disagree. The combining of three different experiences that slightly overlap has become a narrative style Alejandro González Iñárritu has made a trademark as he exhibits in this film as well as 21 Grams and Babel. In the case of Amores Perros, he utilizes that style at its best and creates a riveting, hard-hitting, and brutal depiction of love in their worst cases.

This film contains an overarching message about how love can be misconstrued and ultimately damage the relationships around them. It occurs in three different instances in the story, which highlights just how wrong the perception of love can be. One story revolves around Octavio (Gael Garcia Bernal), as he falls in love with his brother’s wife, Susana (Vanessa Bauche) or at least he believes he does. Octavio’s brother exhibits abusive behavior towards his wife and Octavio sees himself as her saving grace and wants Susana to run away with him. In order to raise the funds necessary to start a new life, he utilizes his dog in wagered fights. An animal that always provides unconditional love gets used as a weapon to help Octavio reach for something unattainable. His dog, Kofi, turns out to be quite the killer dog and Octavio keeps getting the money he needs. After many successful fights, things don’t turn out the way he wants, as the title suggests.

The second story follows a magazine publisher Daniel (Álvaro Guerrero), as he leaves his family to move into a new home with his supermodel girlfriend Valeria (Goya Toledo). The case of a man believing he could simply transfer his baggage over to someone else. They thought they had love but after one incident where their dog goes missing, it shows the fragility of their relationship and in the process of coming together, one loses their career forever. While that incident should unite them and further create a nurturing relationship, it displays the true selfishness they have always harbored coming to fruition.

The final story surrounds El Chivo (Emilio Echevarriía), a man perceived to be homeless, who left his family years ago to join a guerrilla unit. He now spends his days a hitman for money to survive. He gets involved in a situation of two half-brothers in their attempts to have the other killed. In that process, he allows them to profess their hatred for each other but does not provide them with what they wish. After mixing with the two other stories he has the opportunity to reunite with his daughter, but it does not get the happy ending he searched for at the beginning of his quest.

Amores Perros becomes such a triumph in the art of filmmaking, as each story weaves together in the most critical moments, but still feel very independent of another with arcs for the main characters. Each story has its elements of loyalty sprinkled in and in each case, it gets betrayed with Octavio’s dog, Kofi, serving as an example. This dog symbolizes loyalty but also represents a victim of abuse. Kofi becomes conditioned to do nothing but kill other dogs, so a particular scene shows him doing what he’s been taught to do. It would be easy to hate the dog, but his owner taught him nothing but ferocious fighting. Much like a child, Kofi results from the way it was conditioned.

Additionally, Amores Perros looks at the ideas of lust and love. As in the story of Daniel and Valeria, a relationship the audience can assume started from a magazine shoot with former being a publisher and the latter working as a model. Daniel left his family for this woman and after the smallest incident causes their relationship to crumble, he crawls back to his wife, whom he always loved but became sidetracked by his sexual drive. Similarly, Octavio simply lusts for Susana, as he doesn’t realize that his actions harm her more than it actually supports her. Susanna needs stability and something to look forward to, and Octavio just sees her as someone he can have. Two different perspectives that never had a chance of working out.

Love can cause pain because it comes from an emotion so powerful that it makes us do unsavory things at times. It especially becomes dangerous when one believes to be experiencing love when their short-sighted lust clouds their judgment. None of these stories end with a truly happy ending for the characters, because these relationships require complex thought rather than carnal pursuits. Forgiveness does not get dispensed like candy, which some of these characters learn tragically in their pursuits. It all results in a heart-pounding culmination of failure and pain that comes from people not aware of the damage they cause. Tears shed, hearts get broken, which occurs whenever people and passion mix up.