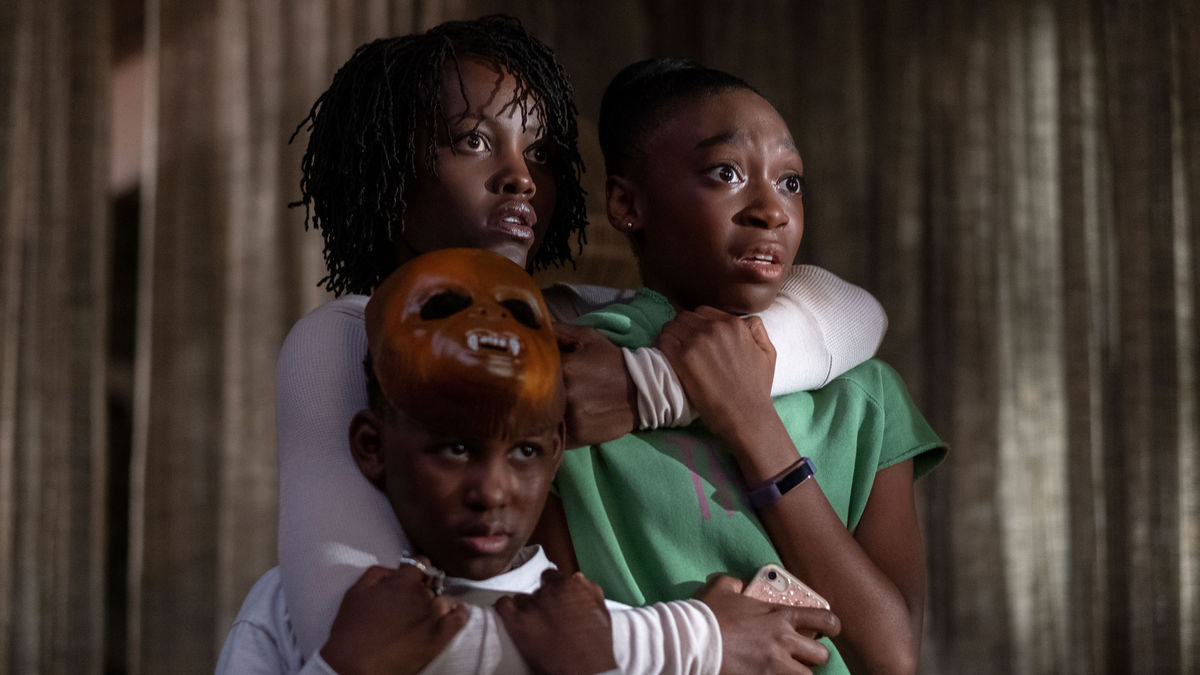 Every action we take as humans affect others whether we know it or now. Every time we buy a new iPhone we have to own the fact that someone in another must create the gadget in a factory where the workers have to produce in inhumane conditions. People can do what they want with that information but it remains the reality of the system in place. This idea of impact drives the narrative of this masterful film built upon its layers.

Adelaide (Lupita Nyong’o) lives a successful life with a loving husband and two kids. She’s ready to relax and spend some vacation time at a beach house they rented. After getting acquainted with some friends at the beach they head back to the house. That same night Adelaide expresses concerns about being in the area and recounts a story about what happened to her when she was younger. Suddenly their son notifies them of a family standing outside in the driveway. Soon Adelaide’s family finds that this particular family looks identical to them seeking to kill them.

Coming off the breakout success of Get Out, Jordan Peele has been given free rein to put together whatever project he wants. His feature film debut became a critical and box office smash, even landing the writer/director a Best Original Screenplay victory at the Academy Awards. Anticipation for his next project reached sky-high because he has demonstrated the ability to conjure original and creative stories and Us became yet another example. With this film, Peele cements himself as one of the most creative minds in Hollywood. He has an incredible way of blending genre material with potent social commentary unparalleled in contemporary feature filmmaking. With this film, he tackles so many topics on top of creating a terrifying and funny viewing experience.

Us features so many strong themes with the most prevalent one outlined earlier being the societal impact we have with everything we do. The tethered version of Adelaide named Red explains that everything Adelaide does impacts her in this underground world created by the government. When Adelaide received Christmas presents, Red would have to play with shards of glass. When Adeliade made love to her husband, Red would be forced to mate with Abraham, the tethered of Adelaide’s husband. It shows that in this consumerist culture, we have an impact on someone else with everything we do. When we go Black Friday shopping, it may be nice for the consumer but the retail workers must endure fights for cheaply priced products and being yelled at for things out of their control. With recent changes to appease the consumer, Black Friday shopping now starts the evening of Thanksgiving, thus taking away the chance for these employees to even have Thanksgiving off. Everything has an impact and it’s up to us to be aware of it or not. In the case of this film, those who are not as lucky have risen up and forced their will.

Much more could be explored thematically, but it would require revealing more about the plot and further developments of the film and I want anyone reading this to go and experience this film. It’s so dense and there has been some pushback from others stating that it tries to juggle too much or it seems unfocused. I have to disagree with these claims because Peele knows what he’s doing with the story but refuses to reveal that information to the audience. Every facet becomes fully explored and the commentary, while being possibly interpreted in different ways, lands strongly regardless. Every theme reveals a horrifying layer that draws allegories to the world we currently inhabit. Nothing, however, is as terrifying as the final shot of the film, which outlines almost a warning of what might happen if we continue our habits without regard to how it impacts other people.

While Jordan Peele remained in control of this entire film, it could not have worked without the incredible performance by Lupita Nyong’o as both Adelaide and Red. The way she portrays both characters so differently while also having the similarities between them is nothing short of remarkable. The voice work she does with Red sounds bone-chilling and extremely terrifying. Lupita has been very selective with her roles since her Academy Award-winning performance in 12 Years a Slave and I am so glad she teamed up with someone like Jordan Peele to show off her incredible range.

The rest of the cast also contributed with Winston Duke playing Gabriel, Adelaide’s husband, and this tethered version. When he portrays Gabriel he becomes the terrible joke giving father that I aspire to be and when he takes on the character of Abraham, he turns into a terrifying force of nature. The children of Adelaide, Zora (Shahadi Wright Joseph) and Jason (Evan Alex) were both integral characters and portrayed well, but Elizabeth Moss also knocked it out of the park with the limited screen time she had. Her run as a mother that just wants to get drunk while on vacation became quite hilarious.

This film became so thought-provoking because Peele always has a message with his films and audiences have come to expect and will for whatever films he releases in the future. For his first two features, he has succeeded with what I see as two masterpieces in this film and Get Out. I’m so excited about all of the films he will be releasing in the future because I know he has something to say and he will blend it with something thoroughly entertaining. We have a master in the making here and I’m glad he has been receiving praise from critics, fellow filmmakers, and audiences as well.