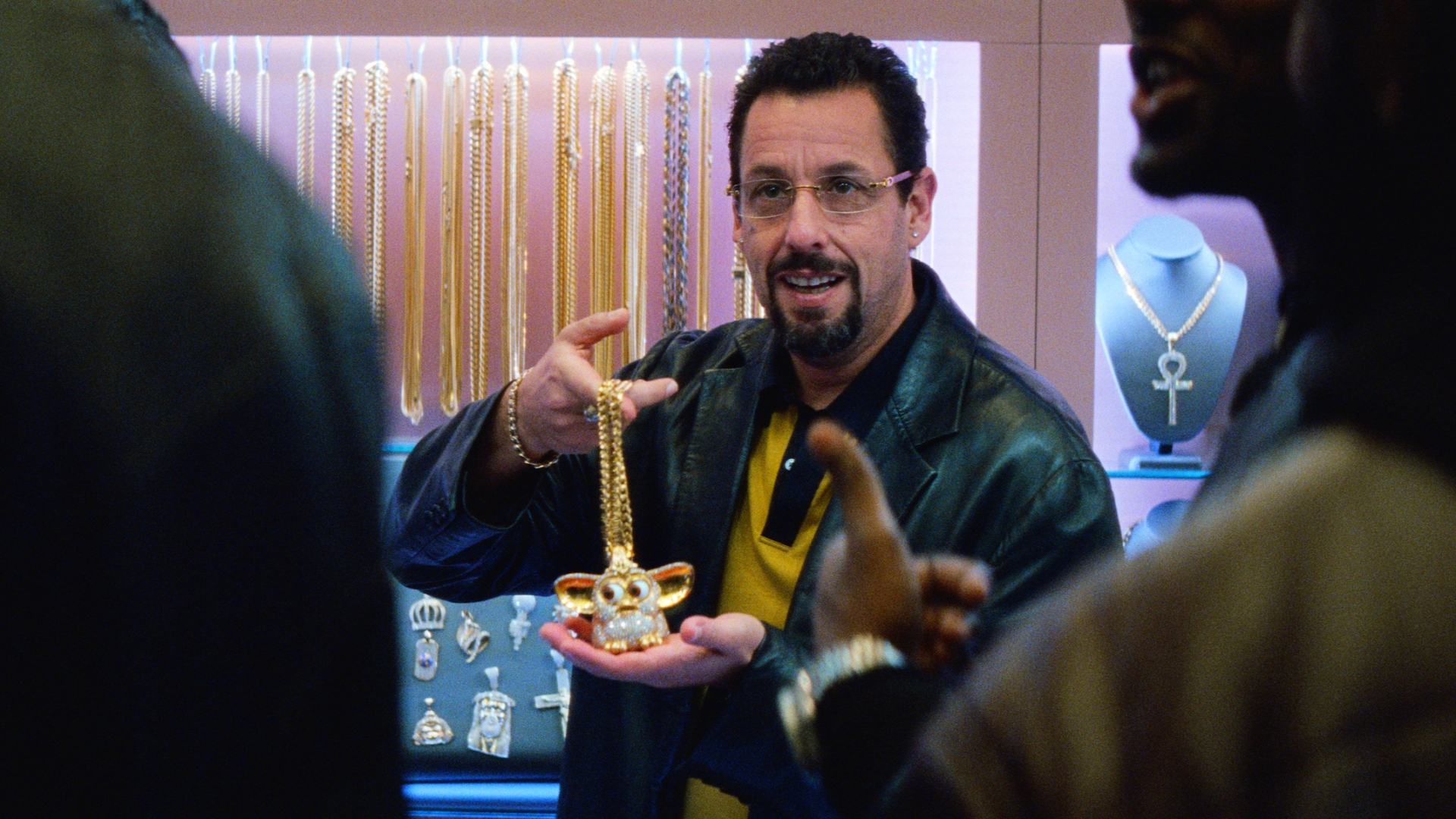 The only thing better than a huge win is the next one. That’s what I took away from this nonstop thrill ride. Just when you think you’ve had enough the ride continues and you have no choice but to stay on.

Howard (Adam Sandler) owns his jewelry store in the diamond district of New York City. He finally gets his hands on what he perceives to be a valuable gem and believes with it hitting the auction, a huge payday will be on the way. It does not help that he’s accrued a ton of debt from many different providers and they all want to collect right now.

A premise that seems quite simple, but gets completely ratcheted up to the highest degree thanks to the incredible duo of Josh and Benny Safdie. Two directors, who’ve made their name by capturing the criminal underbelly of New York and the type of characters people would walk away from. They displayed those sordid characters in Good Time and Heaven Knows What, and the creation of Howard instantly becomes their very best. Howard lives a good life with kids, a gorgeous wife, and a shop running well but he never seems to be satisfied. He has an affair and he incurs high amounts of debt to place sports bets and other wagers. Howard utilizes the money he gains to place bets and takes those earnings to place another, building a house of cards on the verge of collapse. The ride he takes us on is thrilling, but also incredibly worrying. It certainly helps when an actor of Sandler’s caliber takes on this role.

Adam Sandler has become one of the most frustrating individuals in Hollywood for me because he can spend a decade churning out meaningless comedies but when he truly cares and works with directors like Paul Thomas Anderson, Noah Baumbach, and now the Safdie Brothers, he can deliver a powerhouse performance. His work as Howard displays a career-best performance and shows the type of excellent work he can put out into the world if he tries. He conveys manic energy through this performance and keeps the stakes high. The audience should not be rooting for Howard, as he cheats on his wife, makes bad decision after bad decision, but we just can’t help it. People will either land on finding him endearing in some way or looking forward to watching him crash and burn. An in-between here does not exist because of the polarizing nature of Howard.

The different layers of these bets he takes on fully astonish me because there seems to be this wild confidence he has with all the wagers he places. One of the major bets of the film includes a parlay where you can only win if you get everything in the bet correct. He bets hard on so many circumstances occurring, especially with funds that do not belong to him. The whole idea of him carrying out this plan sets a new bar for baffling behavior but that’s the whole point of this narrative. For any other person, the actions in the film would be mystifying, but Howard establishes himself as a person looking for the next score so it got to the point where I threw my hands up and accepted that he would never stop.

Although Sandler served as the draw for Uncut Gems, the supporting cast provided the biggest surprises of the feature. Idina Menzel portrays Howard’s wife and she demonstrates her acting ability outside of singing in a major way. She provides a cathartic moment of calling out Howard for all of the nonsense he brought upon his family. Julia Fox as Howard’s girlfriend matches the manic energy he brings and becomes a scene-stealer. The biggest surprise of them all undoubtedly became former NBA superstar Kevin Garnett. He got much more to do than I anticipated and he delivered with his obsessive nature during the story. The conversations between him and Howard are pure gold. Additionally, Lakeith Stanfield delivered another great performance as one of Howard’s assistants.

Contributing to the nonstop madness of this story includes the editing and sound work. The scenes where Howard places wagers or attempts to get away from his debtors have that stressful feeling because of the editing and how it breaks apart each scene to intensify the conversations. The sound work makes you feel like you’re at the dinner table and people are yelling over the table at each other. Funnily enough, the score felt a bit distracting throughout the story. It stuck out in a way that made it noticeable and when watching the visuals attached to the film, they felt like a mismatch.

There will be moments watching this film where you will want to yell at the screen for Howard to stop, but the inevitability that he will continue to dig a deeper hole for himself creates a sensational story. The Safdie Brothers continue to dazzle with their gritty storytelling style. The story lacks any real layers or complexity but in this case, it’s not necessary due to the pure excellence in the execution of its plot.