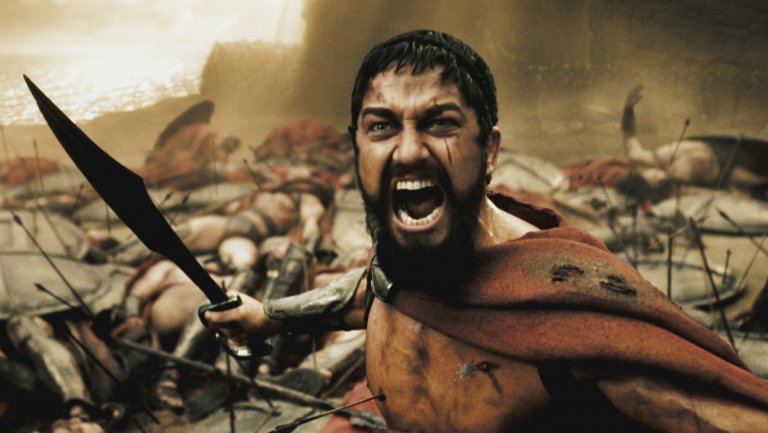 Telling historically accurate films are overrated as the 300 would like for you to believe. Through its incredibly stylish filmmaking and fiercely homoerotic friendships, this film provides the thrills and plenty of mindless action.

After receiving the threat to surrender, as the Persian Army approaches, Leonidas (Gerard Butler) refuses to stand down. Amidst the lack of support of the Spartan council, Leonidas decides to take his 300 best soldiers and take them to battle with him to fend off the Persians. His wife, Queen Gorgo (Lena Headey) stays behind to manage the political machinations while her husband defends the homeland.

Films like 300 rely on their style much more than the actual substance of their stories. It becomes very obvious from the opening shot that it seeks to accomplish more visually than it does narratively, and because it leans so heavily in one direction. It may lose balance but ultimately still creates something worth watching. Through all of its fight sequences and sheer strength displayed, 300 pushes the audience to question how much they enjoy action movies and I found plenty to enjoy with the film.

What has essentially become a meme now, Gerard Butler’s performance as Leonidas completely launched his career. Not only due to him rocking that tight core, but also the sheer manliness he exudes through the character of Leonidas. He’s the type of man anyone would follow into battle because he creates this sense of pride that gets you amped enough to run through a wall. Butler belts his famous line “This is Sparta!” with much zeal as he kicks the Persian messenger down a well. I came to this film years after its release date and even the heavy amount of memes about it did not take away from the power of the scene. Leonidas needs to fend off the corruption of the Spartan politicians in order to defend his nation, which does have some weird vibes to it when viewed through a 2020 lens, I must admit. Butler breathes life into this film and he shows just how much he can ham it up as he will continue to do for the foreseeable future.

Along the ride with Leonidas are the meanest and toughest Spartan soldiers in the land with Vincent Regan as Captain Artemis and Tom Wisdom as Astinos. However, Michael Fassbender as Stelios stood out the most, as he nearly steals the entire film with his charismatic and confident performance. His work in 300 also catapulted his brand into the mainstream and surely contributed to his rise in fame. The distinguishable soldiers don’t have much time to make their mark but with each second they get on screen, they make it work. Stelios has a tremendous line where the Persians threaten to blot out the sun with their arrows, and he responds with “Then we will fight in the shade.” Coupling that response with the subsequent sequence makes for a really fun scene where the Spartans just stand under their shields as the arrows rain down on them.

Behind the camera for this feature is Zack Snyder, who has become quite a controversial figure with his filmmaking style. Mostly known for his work in the DC world with Man of Steel and Batman v Superman: Dawn of Justice, he tends to stick to his methodology with each film, which at times leads to the detriment of his stories. I believe he utilizes his distinct style at its best with 300 because its aspirations aim much lower than the other movies mentioned. This film’s story has limitations with its scope and does not exist to build an entire universe of movies. It allows Snyder to fully flex his visual flavor and it makes the fight sequences look incredible. He may overuse the slow-motion feature on his camera, but he knows how to make testosterone fly off the screen.

300 also has some great makeup and costume work when it focuses on the Persians. The Spartans are quite simple with their cape and shorts. The film has a moment where a character enters a Persian “event” and he can see all of the intricate character designs of everyone around him. It displays incredible detail, as it not only shows how the Persians differ from the Spartans in appearance, but also in values and what they deem important. Their look matches the color palette Snyder chooses for the film, as it shows that this world will soon be theirs, as they only have 300 men stopping them from glory.

The reason to watch this film comes from the great action sequences and all of the formations utilized to make it possible for a few hundred men to take on thousands. The story feels very basic, but everything else makes up for it. 300 allows Gerard Butler to show that he will be the cheesy 80s action star we all need and delivers some good slow-motion shots. What else could anyone want?