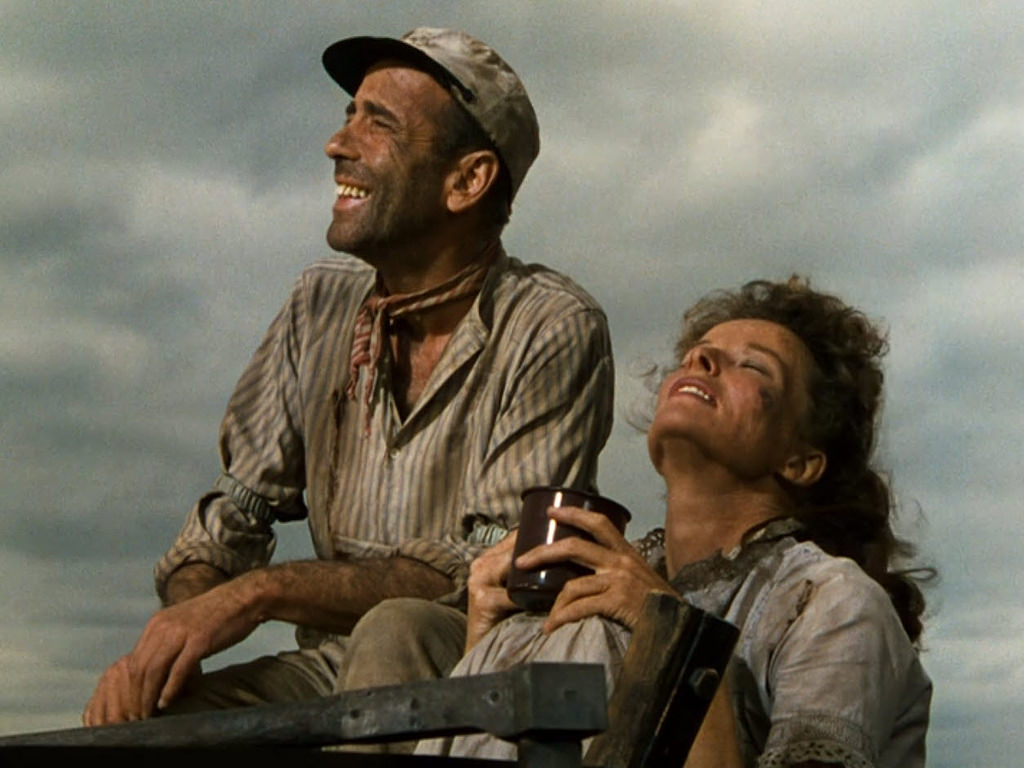 An argument can certainly be made that the two actors featured in this film may be the best to ever take on this craft. In their own ways, they have created legendary characters and have been in the greatest films ever made. While this film does not show their best work, The African Queen puts them together in a sprawling adventure along with collaborating with a legendary director as well.

Living peacefully as a missionary, Rose Stayer (Katharine Hepburn) helps out others with her brother in the village of Kungdu in Africa. Everything seems to be peaceful until World War I begins and German soldiers burn down her village and have her brother killed. At that moment, Rose must team up with supply sailer, Charlie Allnut (Humphrey Bogart) to safety while also getting some revenge.

When first finding The African Queen, I became elated at the possibility of watching Hepburn and Bogart work together in a feature film. While making their careers with other pairings, seeing them collaborate with such unique characters allowed me to see them in a different light, literally. The story follows their adventures together on the boat with a name that matches the title of the production. It becomes a story about two very different individuals coming together to take on a common enemy. They know each other because of the service Charlie provided but once on the boat, they bicker and ultimately find commonality and even some romance. Something not completely original but their talent makes up for it.

Hepburn always takes on eccentric characters in Bringing Up Baby and The Philadelphia Story, but the character of Rose has some incredible composure to remain classy even when stuck in this horrible situation. She may be a woman that tries to be respectful, but she does not hesitate to put Charlie in his place. One of the standout moments comes from her berating Charlie for drinking too much and then when she’s had enough, she ends up dumping the rest of his gin into the water. She stands firm and has a mission that she will not fail to complete, which is taking out a pivotal German ship.

Bogart made a career for portraying very smooth characters in The Maltese Falcon and Casablanca, but he can truly pull off roles with gruff that may be despicable at times. He does so in this film and The Treasure of the Sierra Madre where even when he may seem like someone not to align with, he uses his natural charm on the audience to create a somewhat likable character. With Charlie, Bogart embodies a selfish character that eventually learns from Rose that he needs to change due to the circumstances. I always find it very entertaining to see Bogart play these types of characters because it shows that he’s having fun playing such abrasive roles. It goes against the legend and aura that has surrounded him his entire career.  Having Rose bounce off his character’s behavior provides most of the tension and comedy within the story as they differ so much but come together regardless.

Bringing them both together is the legendary John Huston who worked previously with Bogart in The Maltese Falcon and he does wonders with this story. It focuses mostly on these two characters on their combined journey and almost frames it like a romantic-comedy within an adventure film. All of the shenanigans that occur work because of the way he directs his two actors. The focus stays on them and their time on the boat together. Issues certainly arise between them because of their differences but it remains engaging throughout the entire runtime. It shows that two people on a small boat can make an impact on the war efforts, which feels like the events that occurred on Dunkirk. Even with the large landscape of where these two characters traverse, the story still feels intimate between

Rose and Charlie, which shows the focus Huston had on the story. While having some fun action sequences and many quips, The African Queen provides plenty to enjoy by taking a simple story but utilizing the incredible talent available to make it memorable. It becomes a sprawling adventure with two individuals that find love between their differences and meaning in the face of despair.