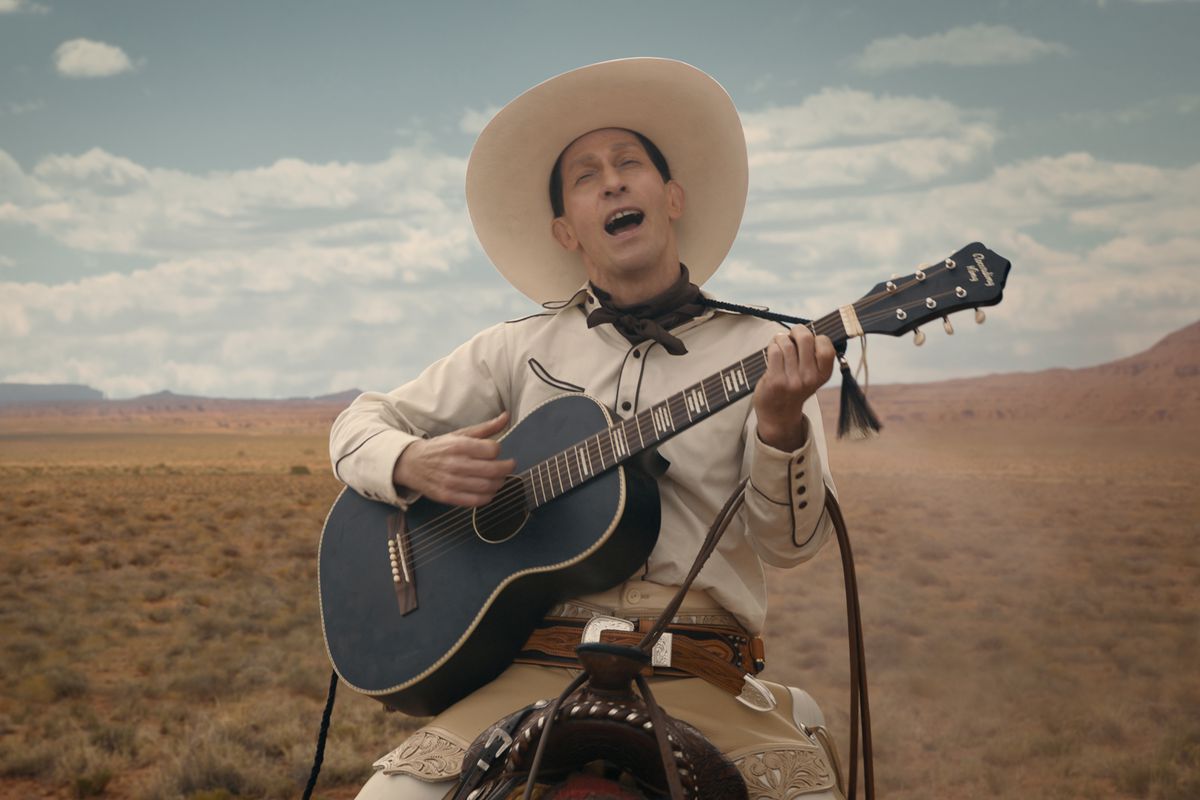 Even with the scavenging and the ruthlessness, the Wild West taught us some valuable lessons about the human condition. It demonstrated what humans would do when the chips were down and had their backs against the wall. Mix in some fun songs and a segmented style of storytelling and you get the latest by a legendary filmmaking duo in The Ballad of Buster Scruggs.

Broken into six different segments following different characters inhabiting the western expansion, we have ourselves a narrative. Through the course of the anthology, we follow a traveling cowboy, a criminal who escapes death, a traveling performance duo, a woman seeking a new life, a gold prospector, and a group of traveling conversational companions.

Anthology films typically are hit-and-miss for me, as the connection of each segment never delivers the cohesion that making them all separate shorts would warrant. Even when some segments are good, the others may be dreadful. Luckily in the case of The Ballad of Buster Scruggs, we had the Coen Brothers take charge and they really put together some incredibly fun and ruthless segments. Some are much better than others, but each of them reaches a standard of excellence that makes the overall experience of watching this feature worth it.

The film opens with the titular character portrayed by the incredible Tim Blake Nelson. A man who is no stranger to working with the Coen Brothers and he brought it once again. Just like in O, Brother Where Art Thou?, he brings a sort of innocence to the world he inhabits, only to prove himself valiant in some unsettling ways. In the case of portraying Buster Scruggs, he travels and serves as a guide for the audience into this new setting. He speaks on the good and bad aspects, which makes him run into trouble. Every interaction is downright hilarious because he seems much more cheerful and his garb looks flawlessly clean compared to others. He sticks out but his ability with a pistol earns him some respect. Tim Blake Nelson ensures that this whole anthology starts off with a bang and results in being the best segment of them all.

Each of the other segments serves similarly to Buster Scruggs in their look at the West, in the way it may seem to nurture but can get brutally violent at any moment. It speaks to the selfish nature of humanity when we operate on roads rarely traveled or laws barely in-place. It could be from the gold prospector working hard to find a gold mine, only for another man to try to secretly kill him or a traveling duo of performers where one gets abandoned the second something better comes along. The violence and the selfishness happens almost abruptly in the story to show just how unemotional and sudden the brutality became out there.

Along with Tim Blake Nelson, the rest of the segments contain some great actors that shine in their limited time. From Liam Neeson, Zoe Kazan, Brendan Gleeson, Clancy Brown, Harry Melling, and Tom Waits among others. None of them are strangers to the Western genre and they fit right into the world the Coen Brothers crafted for the screen. It comes to no surprise that they would take on these stories, as it fits right into their sensibilities when peering into their filmography.

Joel and Ethan Coen have a special way of captivating audiences with their mentally weighty and at times action-heavy films. Looking at the different variety of works they’ve created makes it difficult to nail down something common between them all, but they exude excellence. It can be something as silly as Intolerable Cruelty or an endless depth of despair like No Country for Old Men. They can have a deep conversation about the Jewish experience in A Serious Man and then a look at the ridiculousness of life in Burn After Reading. No matter the story, they bring their sensibilities and have proven once again that they’re a treasure to the filmmaking world. With The Ballad of Buster Scruggs, they tie these shorts together and balance a good tone of violence and comedy in a way that never feels off or abrupt. Each segment has its lesson and the ridiculousness of it all only adds to the fun.

With each segment having its own value, The Ballad of Buster Scruggs shows itself to be another fine addition to the filmography of these great directors. By utilizing the typical wit found in a Coen Brothers feature, they balance out each segment to create something that threads together nicely to show how ruthless the western expansion became among all of the romanticization.