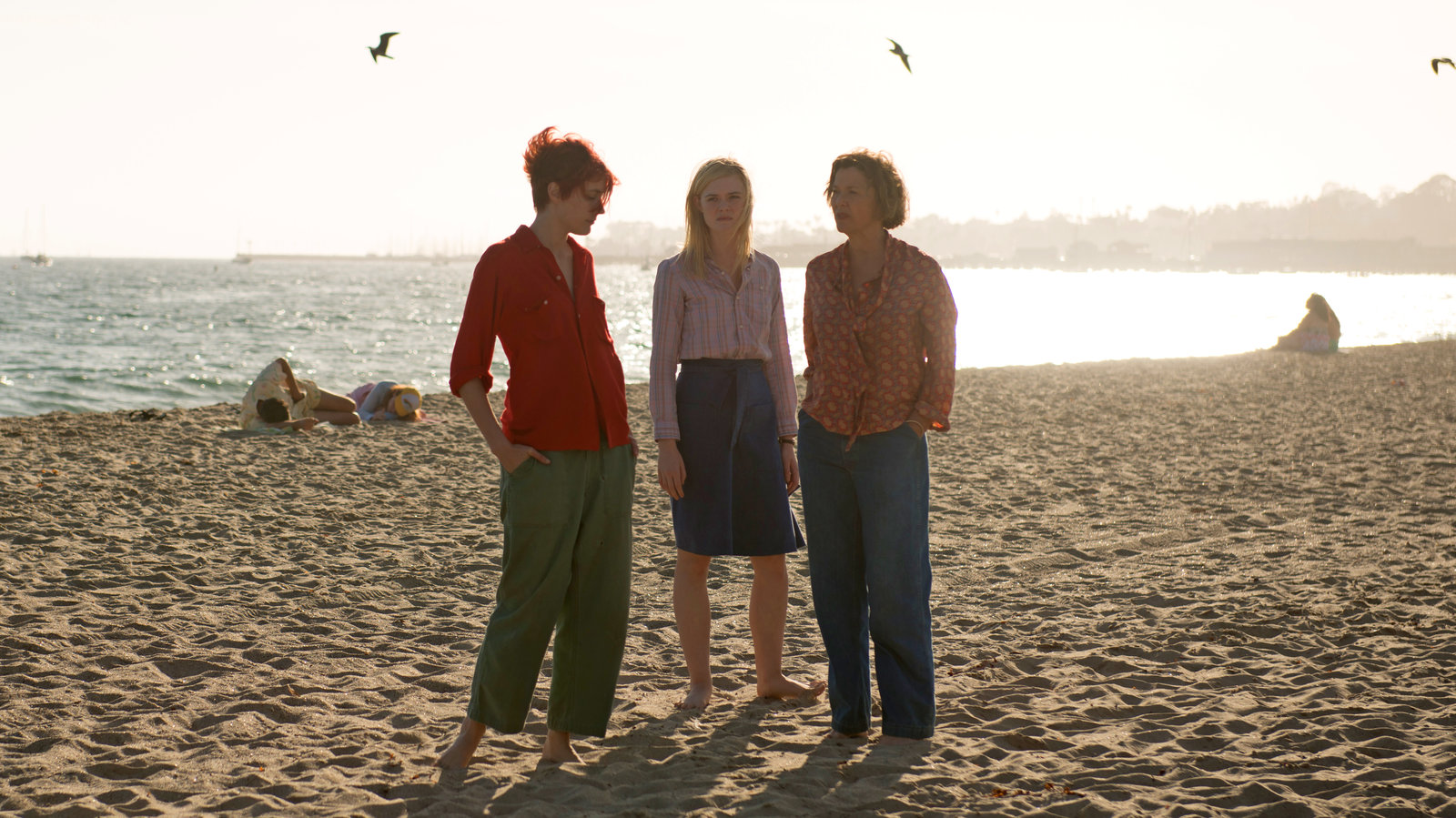 Being a good man has such a rough definition because it can easily fall into toxic masculinity, depending on who happens to be the guide. Lucky for the young man in 20th Century Women, he has some terrific guidance provided by equally flawed and inspiring women to help him along with his journey.

Dorothea Fields (Annette Bening) lives with her son and a pair of other tenants that help around the house and participate in helping raise her son, Jamie (Lucas Jade Zumann). As he enters his teen years, Dorothea wants him to have influences that understand him more than she does so she asks the younger Abbie (Greta Gerwig) and Julie (Elle Fanning) to assist.

As much as the story fixates on the development of Jamie, this film unquestionably becomes about the women as the title indicates. It looks at their complexities, faults, and what they do to overcome them in order to support Jamie. Each of them stands on their own and stitch together something beautiful in what they hope to succeed in life. Each of them are in a different stage in life yet have incredible hope to demolish the obstacles in their way.

These women were portrayed beautifully by a tremendous trio of actors that each brought their A-game to the production. Greta Gerwig, in particular, really does something special with the character of Abbie. She sticks out with the fiery-red hair she sports and the way she snaps pictures of everything around her. Every stage in life becomes a project for her to derive meaning from. The one she takes on this film focuses on taking pictures of everything around her that defines her in some way. She definitely has the freest spirit of all others within the house and receives some of the most emotionally potent moments in the story.

Similarly, Annette Bening works wonders with her character, as she attempts to hold everything together in the house. Thematically, she represents this house that all of these folks have found themselves in. Dorothea explains the origins of the house and the different owners it had since its creation and even with it standing for so many years, it still needs plenty of work. Dorothea fits the bill in the same way with having to restart after her life has shifted in so many ways. From having a child at an unexpectedly older age to getting divorced, moving into this house, and allowing other renters to move in. Dorothea is the opposite of static stemming from her past and present, which allows her to hold everyone together.  A house can do that with the shelter it provides others physically, just as Dorothea does emotionally for all everyone residing within it.

20th Century Women serves as a great capsule for the 1970s and the feelings, fears, and emotions that festered in the minds of the people in that era. From the rise of rock that hilariously gets taken very seriously, and how this era felt so unique as compared to others. Different generations are represented in this house with Dorothea being the oldest. The film shows how the era when she was born with all of its defining attributes and how it compares to the time Jamie finds himself growing up in. Displaying that generational difference ultimately pushes Dorothea to rely more on Abbie and Julie to help raise Jamie. She sees what this generation of teenagers enjoy and look up to, which she cannot comprehend. As great of a mother she is to her son, she needs back up with building that connection. At that moment is where the feature beautifully shines.

The way Abbie and Julie teach Jamie about life contains many altruistic virtues about being a good man. They’ve each experienced what bad men have done and Jamie becomes this blank canvas, who has much to learn from them and their experiences. They become his older sisters in that way, as he learns to dance to kick away any negative feelings and how juvenile teenage boys are when talking about sex. It leads to one of the funniest moments of the film when Jamie proves that his friend’s sexual conquests are completely overblown. The relationships fostered are key and drive the narrative forward in a resolute manner.

This film became my first experience viewing a Mike Mills film, and I’m ready to see more of his work because he crafts something special in 20th Century Women. He ostensibly creates a coming of age story for this young boy but makes it completely about the women in his life. Jamie goes through all of their most vulnerable moments in his young life and through that he learns some timeless lessons of what it means to be a good man. These women have seen the good and the bad that their opposite sex has to offer, and provide some excellent insight on that matter. Mills’s direction gives an almost weightless feel to the film, even if it handles serious topics at times. The balance between the melancholic and comedic moments allow for a reprieve of each to create a well-constructed narrative.

As beautiful as it is poignant, 20th Century Women feels like a success in storytelling, but also a beacon of hope that creating a good man comes from different perspectives. These individuals living under this house feel like a family, but also one that won’t be permanent. With the time they have together, they leave an indelible mark they will carry for the rest of their lives. It made me want to thank all of the incredible women in my life who have helped me into who I am today through their words of wisdom.