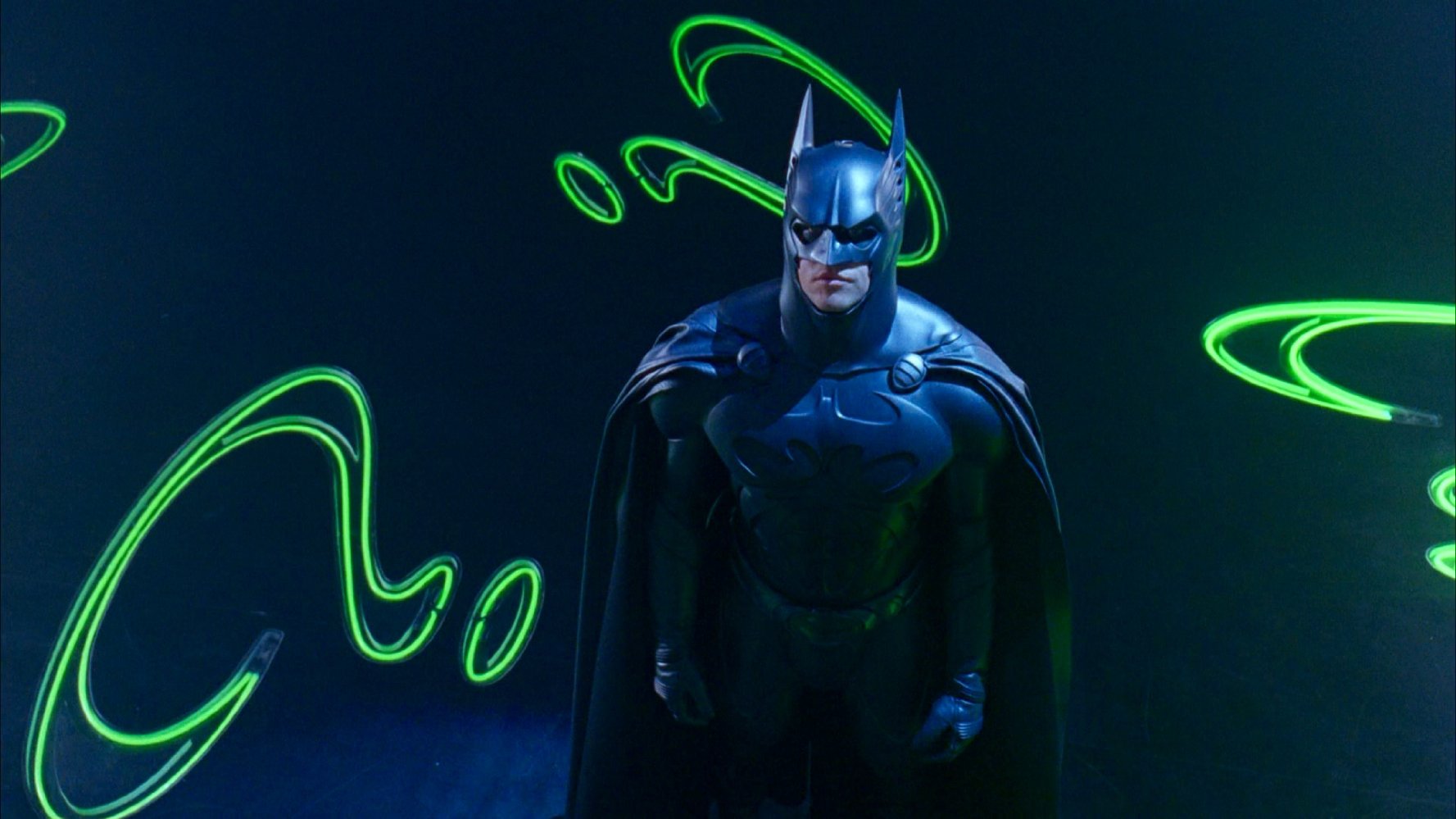 It’s easy to see the natural decline of these Batman films, which had some silliness mixed in with some serious content before, but have become a complete farce when handed over to everyone’s favorite director, Joel Schumacher. I could not help but enjoy some aspects of Batman Forever, but it unquestionably fails in some of the most basic aspects of being a feature film.

Living the double life of a billionaire and a vigilante, Bruce Wayne (Val Kilmer) must contend with the rampant crime of Two-Face (Tommy Lee Jones) and the rise of The Riddler (Jim Carrey). He gains a new love interest in psychologist, Chase Meridian (Nicole Kidman) and takes in an orphan who saw their family perish.

Collecting the incredible talent for this film might be a masterclass from the casting director in convincing the actors to hop into this feature. It probably came down to the buckets of cash that was dropped on them, but you have to respect how much of them really went for it. None more than Tommy Lee Jones as Harvey Dent/Two-Face. Without a doubt, the most eccentric iteration of this character that I have ever seen. I could not tell if Jones was doing a cross between Joker, Two-Face, and The Riddler all in one go. Knowing him to be the more serious type like in The Fugitive and No Country for Old Men, I was in disbelief that he provided so much camp in this role.

Taking everything as camp would be the only to find enjoyment in the film, as it has so many issues. One being that the visual effects were dated the second the film was released. The Burton Batman films at least had a Gotham City that felt tangible and lived in. It had a personality that made the city worth fighting for. The Gotham we find ourselves in Batman Forever feels like a video game. All of it looks virtual, which would be one thing if they looked good, but it’s atrocious.

The dialogue of these Batman films has never been its proudest achievement but, my goodness, they reached a whole different level of horrific. The film could have been a farce the whole way through, which would make it more redeemable but they try to balance that with psychologically examining Bruce’s trauma from losing his parents. It left me unsure what the intentions of the filmmakers became. Start at the beginning where we have a new Batman with Val Kilmer putting on the cowl. What epic phrase will be the first of this new Batman? Well, it starts with Alfred (Michael Gough) asking Bruce if he’s sure he does not want to take a sandwich with him before he goes out to take on Two-Face. In full gear and ready to go, the new Val Kilmer Batman turns around and says he’ll get takeout, jumps in the car, and drives away. If only you could see my face in that moment. It feels like something you’d see in The Lego Batman Movie, which knew what it was all throughout.

So much of this film does not work, but if you’re in the right mood and have caught the nostalgia bug, you might enjoy watching Batman Forever. Somehow it was the only of the pre-2000s Batman films I did not grow up with, so it did not have the nostalgia shield similar films may receive. It’s a complete mess that happens to have some incredibly strong actors trying their best to cash that check and buy themselves a new beach house. It wastes Val Kilmer, who truly tries his best to be a good Batman, but it was never going to succeed because the intention of the film became very clear with it being purely about selling toys rather than telling a good story.

One Reply to “Review: Batman Forever”