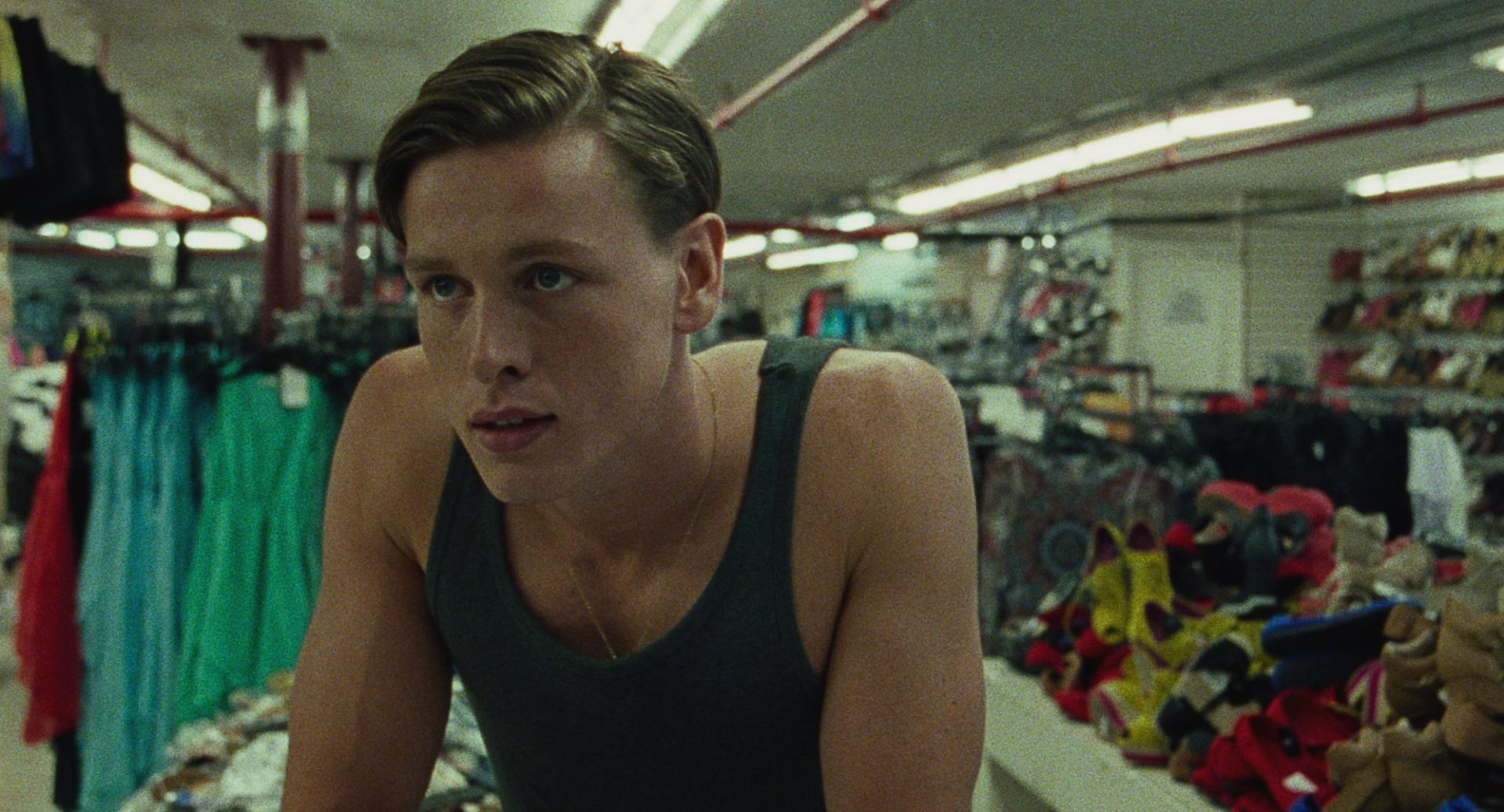 Hypermasculine culture contains a toxicity that can radiate if one pays attention to it. One that makes it uncomfortable to be around if one does not conform to the ideals that reject showing any outward emotion and don’t even think about being attracted to anyone that’s not a woman. In that harmful community, we found our protagonist and his struggles in trying to discover his sexual identity.

Frankie (Harris Dickinson) hangs out with his buds on the Coney Island Boardwalk, getting into their shenanigans but with no real purpose. After a night of boisterous fireworks, he meets and begins to date Simone (Madeline Weinstein). When not with her or his friends, Frankie sets up rendezvouses with other men online to meet up and have sex, which he desperately attempts to hide from everyone else around him.

There’s something incredibly raw about the way Eliza Hittman filmed Beach Rats. She wrote the script and directed the feature and continues her run of creating such nerve-inducing work. Her first feature, It Felt Like Love, displayed a type of female sexual insecurity that put the protagonist in a place to do what she felt was right to be accepted. Hittman refuses to make it easy on her characters and certainly does not hold back the visceral nature of Frankie’s story. From her camera placement to the performances, the film maintains this air of insecurity that makes you fear for Frankie as he tries to admit his sexual feelings are set outside the norm.

Beach Rats serves as a strong and unfortunate reminder that homophobia still remains a fabric of this nation and certainly in these hypermasculine friend groups. I know that from when I grew up and how anything with a negative connotation would be labeled “gay.” You would think that phase has passed but just one look at the Facebook feeds of people I went to school with crushes any hopes for a more progressive future. As a character, Frankie is in a sexual relationship with his girlfriend along with the men with whom he hooks up with. He does not consider himself gay or bisexual but just states that he has sex with men. He lives in a culture that does not allow him the opportunity to even consider identifying in any other way that’s not heterosexual. The toll can be felt and it sets the tone for the entire feature.

The performance by Harris Dickinson as Frankie channels that pain of insecurity. He demonstrates the careful line that he needs to walk for his own sanity and safety. It’s evident that these friends would not hesitate to physically harm Frankie for having an interest in men. In classic homophobic fashion, they would assume that Frankie wants all of them and has used their friendship to pervertedly be around them physically. Dickinson carries those intimate scenes so well where he presents this type of confidence that he has been raised to present, while also being someone who wants to be with people that complete him. He made quite the splash with it being his debut feature as an actor.

Just like in all of Eliza Hittman’s films, New York feels like it’s own character. Just like It Felt Like Love, it shows parts of the city that does not get highlighted as much as the more glamorous sections. Her stories do not take place in Midtown Manhattan like in other glossy movies, nor is it hipster Brooklyn. Hittman, born and raised in New York, knows how to display the real and tangible people that inhabit the city along with their struggles. It further grounds the story with how gritty they become and unquestionably human in their journeys. The characters in these stories know they must do what they can to survive and that underlying urgency flows through this film and her debut feature. Beach Rats also shatters the illusion of their being completely safe areas for someone in the LGBTQ+ community. This film does not take place in rural Alabama, but in what is considered one of the most progressive cities in the world. If safety cannot be guaranteed here then where? Hittman is a special filmmaker and I look forward to everything else she decides to bestow upon us with her raw style of filmmaking.

Beach Rats shows the reality of many folks struggling with their sexuality in environments that may be dangerous for them. It’s a reality that still exists in this century and the path towards more acceptance in even the most progressive cities still feels incredibly long. Frankie becomes such an endearing character and represents the struggle of many that simply seek support as they attempt to discover who they are. Certainly not the most comfortable watch, as you just sit there waiting for the other shoe to drop but that tension displays incredible filmmaking and makes this a terrific feature.