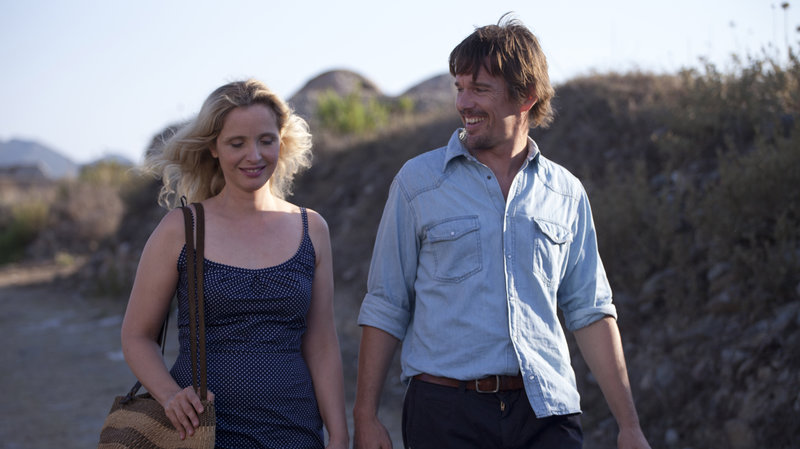 As relationships age, they evolve as the two individuals mature in their own ways in conjunction with their combined growth. Things change as the years from the first meeting increases, especially when there are kids involved. It creates the opportunity to look back on that first instance and see how much has changed. Before Midnight captures another stage in the lives of Céline and Jesse and caps of a trilogy of complete perfection.

Taking place 18 years after their initial meeting, Céline (Julie Delpy) and Jesse (Ethan Hawke) have been together since their reunification in Paris and now have twin daughters. They have spent the summer on a Greek Peloponnese peninsula and Jesse’s son stayed with them. Now that he has flown back to Chicago to be with his mother, Jesse and Céline begin to contemplate what it means to have a connection with the young kid as they walk to a hotel for their night alone.

With a whole different set of responsibilities and in another stage of their lives, the conversations held in Before Midnight feel incredibly different than the ones in the previous films. The love shared by Céline and Jesse appears differently as they enter their 40s and no longer have the same mindset as they had when they first met nearly 20 years ago. They no longer have the opportunity to be youthful and impulsive because they have children that bind them. Céline and Jesse no longer have that happenstance romance that has defined their relationship. Everything has a routine, which continues unnoticed without it being called out.

Even if it bears a similar title structure, Before Midnight has a slower pace to it because there is no rush anymore. Instead of trying to say everything that has been bottled up for nine years, they have had almost a decade together where they have grown and lost their bodies from when they were in their 20s and 30s. The fire that made fate happen for them twice no longer has to burn as brightly because they now have each other. The love that evaded them has been caught and has been kept between them now. Their walk to the hotel provides that reflection for them to have a gentle conversation about what they want to do in the next chapter of their life.

The tension of the story arises from Jesse’s desire to live closer to his son. Unsurprisingly, Jesse does not have the best relationship with his ex-wife, whom he left when he decided to stay in Paris with Céline. Jesse does not want to miss out on the growth of his first son, because the kid has grown so quickly and will soon be an adult. Considering that his ex-wife would definitely not let the son move to Paris, Jesse contemplates having Céline and the girls move with him to Chicago. An unwelcome prospect for Céline as she tries to establish a new career in their current home, Paris.

They did not have time to get into arguments in the previous films because they wanted to express their love in the limited time they had. Now, they have more time than ever to dig into all of their past actions and talk about all of the issues that have been brewing for years now. It takes a look into the past and those defining moments and how they have led to their current circumstance.

Just like with Before Sunset, this film takes place nine years after the last film along with the actors. Julie Delpy and Ethan Hawke have aged with these two characters and seeing the work of their careers between each film has shown they have grown just like Céline and Jesse have in the films. Once again they have co-written the script with Richard Linklater because of their understanding of these characters. They know what it’s like to age with these characters and how time would cause friction in any relationship. It shows just how tired Céline and Jesse appear to be in the film. They no longer have strong energy; the passion they once had does not dictate their lives as much anymore. Being comfortable has taken over.

I adore how each of these films looks at love in its different stages. From the meet-cute to the reunification, and now the routine of life that surrounds the relationship. At the date of writing this review, I will have been married to my wife for almost three years and dating for nearly seven years. Routines become a natural part of the relationship. Céline brings it up in the way she and Jesse have sex. She mentions that he does the same thing every time. The same moves that end in the same way. Naturally, different routines form, and I currently don’t have kids, so I cannot imagine how much more solidified the daily exercises become. Love may remain firm with a routine, but it surely does not keep the same passion. Something both of these characters have been experiencing for years.

They have done Vienna, Paris, and now their backdrop happens to be Greece, as they walk their way towards their destination. It looks as stunning as the other two cities. Before Midnight also has a beautiful and light score that follows these characters. Strong use of the piano and guitar give it a calming sensation as we follow these two and the conversation they’re about to share, as they reflect on life. Even when things get serious and their arguments get more heated, the score remains with the same tranquility because the same love they’ve carried for each other will refuse to subside.

Figuring out someone like Richard Linklater as a director feels impossible. He jumps around and takes on the oddest projects, which he always tries to thread philosophical ideas. This whole trilogy is his masterpiece with the adoration he has for these characters in their journey. He allows his actors to take center stage and minimizes any other distraction that takes away from them through their conversations. He’s aged along with these characters and has been there as they age in their relationship. His direction has such a nice touch that pairs well with the score. His work in crafting a perfect trilogy makes him a legend in my mind and I will always appreciate his effort in these films.

Just as Before Sunrise introduced us to the characters, I felt Before Sunset leaned more towards Céline and now Before Midnight becomes more about Jesse with the story. Just like in any relationship, the focus will fall to one or the other at different points. A blossoming relationship does not stay at 50/50, but rather to match your partner wherever they may be. If they’re only at 35% then match it with 65% and vice versa. Sacrifices are part of any relationship working out in the end.

After completing this trilogy of films, I had never felt more invigorated by the power of excellent storytelling. I could not process how each of these films could touch me in a different way with these two characters. These films have provided me with an opportunity to watch two individuals grow by only peeking at three days within an 18-year span. They feel so real and lived in because of the trio of Linklater, Delpy, and Hawke. A truly perfect trilogy of films that will forever be part of the fabric of my film-loving life.