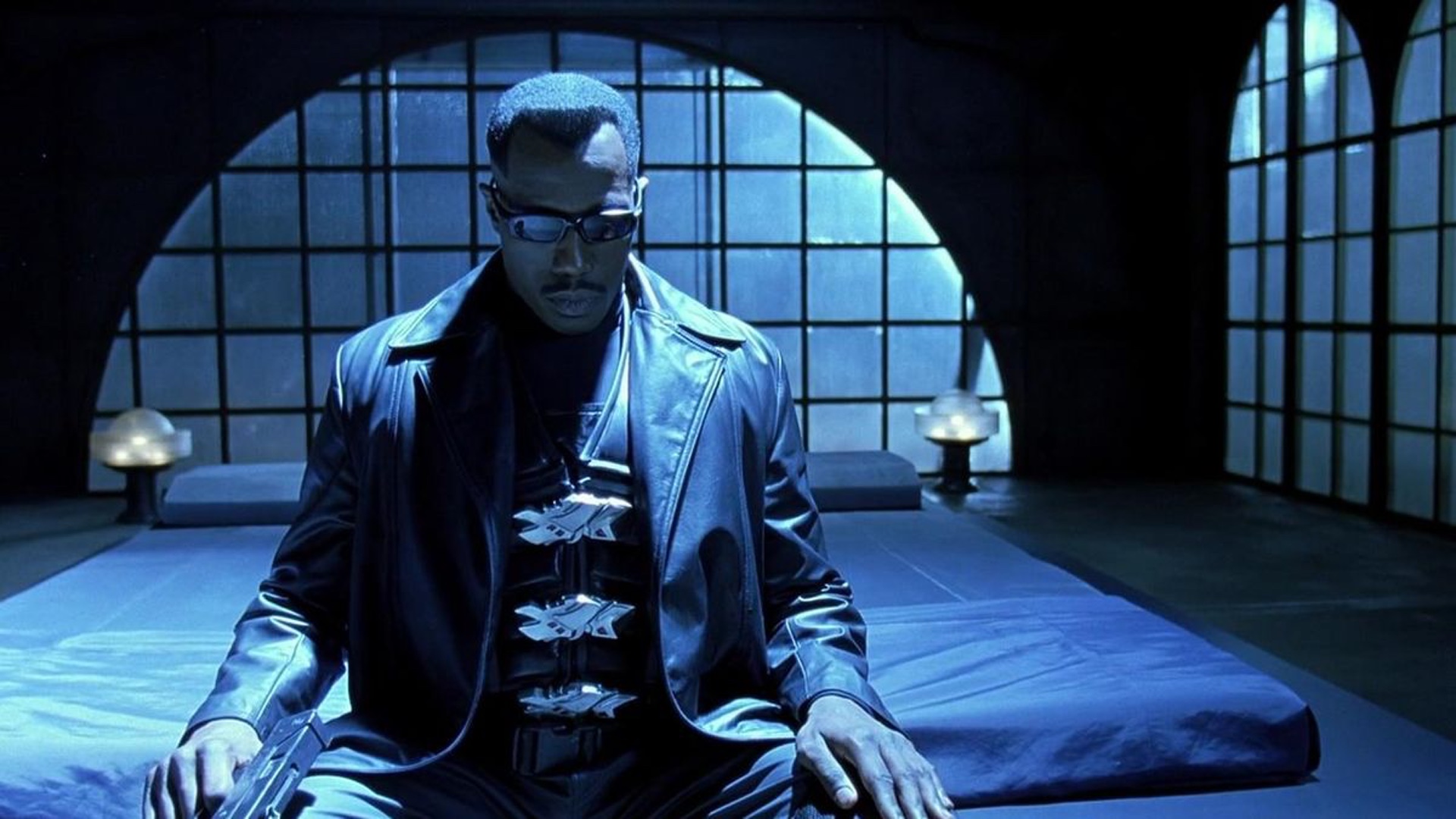 Back in 1998 when Blade first hit the scene, no one could imagine the state of Hollywood we experience today where comic book films would be the top priority for every major studio. The success of this genre truly kickstarted in the 21st Century but this vampire story helped boost it through its animated dialogue and how it brought forth a world inspired by comics.

With his half human and half vampire blood, Blade (Wesley Snipes) spends his days and nights hunting vampires for killing his mother. With his usual hunts, he must now thwart a young vampire named Deacon Frost (Stephen Dorff), who hopes to start a war between them and humanity.

For all of the cheesiness that oozes out of Blade, I cannot take issue with the interesting ideas it brings forth about the relations between vampires and humans. The main conflict surrounds the villain, Deacon Frost, and his quest to wage war on humanity. He believes since vampires feed on human blood, they should simply rule over them, which seems harsh but how would it be any different to the way we treat the animals we consume? We keep chickens, cows, and pigs in cages to prime them for our consumption. This plan represents vampires treating us how we treat other creatures we see as below us, but we’re on team human thus making Blade the hero. Blade’s motivation in the story mostly stems from his hatred of vampires and Frost becomes the biggest threat by default.

Becoming that bigger threat shows an interesting expansion of a world developed in the film of this vampire society. There happens to be a divide between the younger and older generations of these creatures. Younger and older are relative considering many of them live thousands of years, but some politics come into play between Deacon’s aspirations and the old guard. The elders believe in the pure vampire race, which they weaponize to look down upon Deacon, as he was turned into a vampire rather than being one from birth. A divide I did not expect in this world, but it shows the layers of this society and how prejudice exists even within these bloodsucking creatures.

Everything built around the story drew incredible interest, but I felt the narrative to be lacking along with some very dated action scenes. Everything felt too simple for all of the interesting ideas it proposed in the creation of the world, which would be a trend followed by several comic book films following this feature. As much as I enjoy corny dialogue, this one just did not pack it within a package that made it interesting. Instead, the corniness comes in as a major flaw. Additionally, the action sequences don’t hold up and I cannot imagine people were too impressed by it especially with a particular groundbreaking science-fiction film on the verge of release just a year later. The computer-generated effects looked atrocious but it needed to contend with the limitations of the technology at the time.

Wesley Snipes portrays Blade, which feels like perfect casting in retrospect. He fully embodies and embraces the weirdness of this character. He definitely earned his paycheck with this performance as he does plenty of the heavy lifting along with Kris Kristofferson, as Blade’s gadget man. It’s hard to imagine anyone else portraying this character, which will soon become a new reality with the new reboot in the works with Marvel but with this performance, Snipes begins his run in making this character known in popular culture and one of the characters that have defined his career.

Above all, Blade feels like a basic 90s action movie while carrying the torch for the rise of comic book films in the nearing century. The blood-soaked parties and the light-fearing vampires add an element of fun to the story, which ultimately falls short because of the lack of any real story. The film sells itself on its action, which failed to impress at least in my estimations. It should be fun to continue and build out this world because it contains many interesting parallels to our reality but with the metaphor of blood-sucking monsters. Blade could have teased these ideas out more but instead it wanted to focus on cheesy dialogue and lackluster action, which ultimately left me disappointed with the overall product.