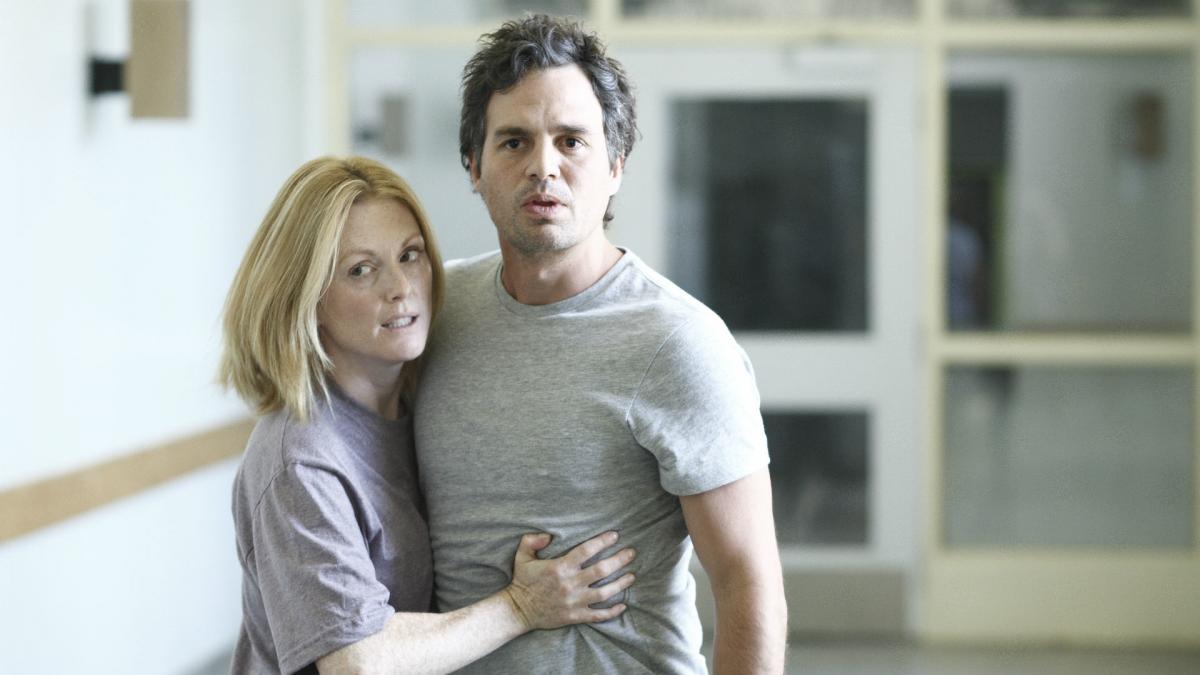 When the chips are down and a lack of structure exists, Blindness shows us humanity will naturally create one. Any system initiated will certainly involve pleasure for some at the expense of pain for others. While setting up a resonant metaphor through its narrative, Blindness struggles because of its bleak style and its gratuitous depiction of abuse.

One man randomly loses his sight while driving and he can only see white. When he meets with his eye doctor (Mark Ruffalo), nothing medically malignant can be found, until it begins to spread onto others. This prompts the government to wrangle up all of the people to quarantine them. As the doctor gets taken to this camp, his wife (Julianne Moore), who can still see and seems to be immune, pretends to have the blindness to accompany her husband.

The metaphor this film operates within makes itself quite clear and contains strong ideas, but I find major issues with the execution and just how gratuitous it turned out to be. To speak on the metaphor, it shows how inhumane humans can be and the ways people assume power even when no structures exist. In the case of this camp set up for these blind folks, a vile man proclaims himself to be the king and takes control of one ward of this facility. He has a gun, which gives him an advantage over others even if he’s blind. With this power, he grows a faction of other people joining him, which in turn gives him an army to command others and take control of the scarce resources they’re given by the United States Government. Hierarchy and power cannot be resisted by humanity, even when suffering a common affliction. It’s what makes us the most dangerous aspect of any post-apocalyptic or doomsday situation. No matter the state of the world, someone with any sort of advantage will utilize it to exploit others and the methods used in this film were unnecessarily cruel.

Even with the different holes, the film has in logic, especially as it reaches its climax, Blindness captures moments of abuse in such a horrific way. I’m all for art that shows the pain involved in a situation, but some moments simply do not need to be captured on screen. One glaring example occurs when the King demands objects for the other wards to receive food. At first, the King collected their precious belongings but at the next go around, the other wards needed to send their women to be raped for the next shipment of food. Something the women collectively decide to do for the good of themselves and the other men. I understand the sacrificial component of this moment and how the film allows the women to subject themselves to this rather than being forced to by the men of their ward, but the way they show what transpires next felt infuriating. It does not show the rape in detail but you hear it happening as the wife’s doctor gets forced to pleasure the King in a way that feels sick, degrading, and completely unnecessary. The moment where the women return after being violently raped, the look on their faces says it all, which only proves showing that violence did not need to happen.

As aggravating as that sequence became, it underlies the main issue of this film. It leaves nothing to interpret or even ponder because it attempts to lay everything out narratively and does so in such a splintering way. Not only were its attempts at using this metaphor weak in its execution, but it has been condemned by advocacy groups as ableist towards blind folks. The device of these grand metaphors about humanity further denigrates a population living with the physical disability utilized in this film.

It goes to show that perhaps director Fernando Meirelles should stick with his co-director from City of God, Kátia Lund. His solo efforts like this film and The Two Popes show a lack of composure behind the camera. He either pushes way too far as he did in this film and then incredibly tame in the movie about the two clergymen. He found the middle ground with City of God, which probably mostly came from Kátia Lund. His hideous style of directing this feature made great actors like Julianne Moore, Mark Ruffalo, and Gael García Bernal look bad, which takes some doing.

There are countless other films that possess a more deft approach to the subject matter addressed in Blindness. This particular feature shined a white filter over everything and decided to focus more on making everything dirty rather than fully constructing a strong and fulfilling story. A waste for these tremendous actors, who could not help elevate some putrid directing and source material I hear told the story much better.