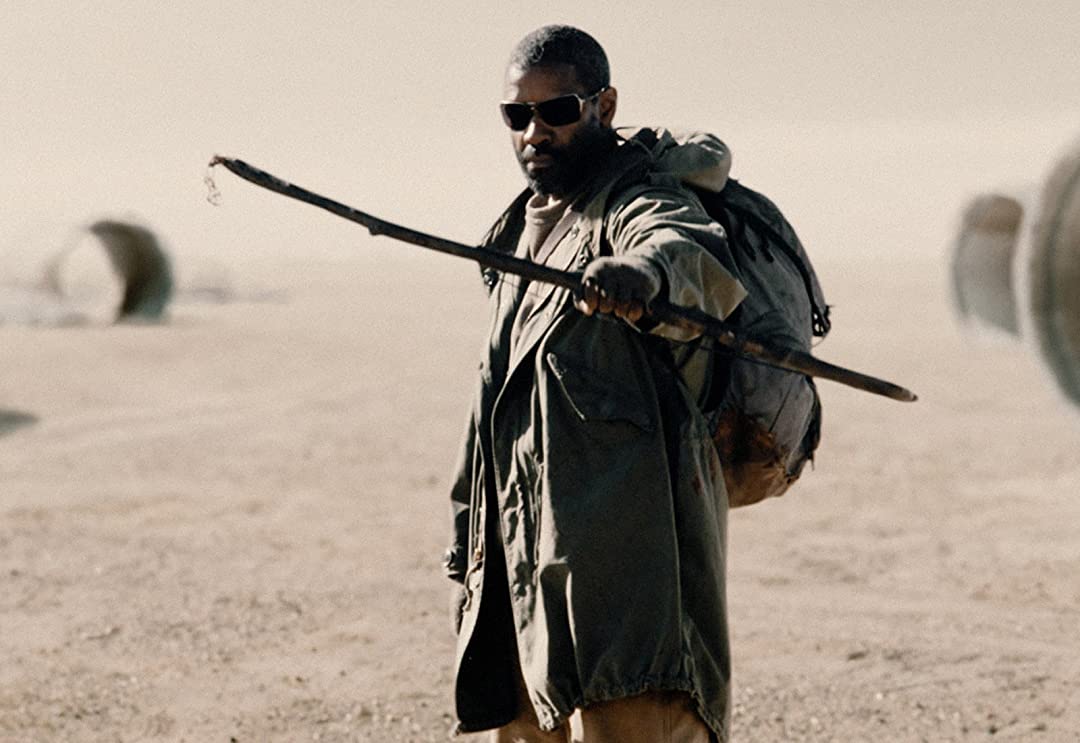 Directed by: The Hughes Brothers

The ability to read carries power because of the power found in literature reminding us of our capabilities and freedom. It creates a diversity of thought, which is why books became an intentional target of the Nazi regime and what keeps people unaware in the post-apocalyptic world in The Book of Eli.

Traveling west to find a specific colony, we find Eli (Denzel Washington), who has incredible skills in combat to fend off all marauders in this new world. He carries the final copy in existence of the Bible, which makes it a hot commodity when he wanders into the town owned by Carnegie (Gary Oldman), who’s obsessed with attaining the book for his collection and for methods of control.

The future we find ourselves in within The Book of Eli shows the meager remains of humanity after an incident with the sun. War broke out, which led to the burning of books, mainly the Bible, and now it’s a dry world of wandering people hoping to rob others for survival. Sunglasses are necessary for a sun that has blinded others, and the heat has killed nearly all vegetation and creates a desert where chapped lips are common and the currency has returned to simple bartering. The most precious material of them all unsurprisingly becomes water because of its scarcity.

With the eradication of most books, a whole generation has now grown up illiterate and unaware of how the world operated before this new world took hold. The only ones with the age to remember happens to be Eli and Carnegie and their battle for the intellectual future hangs in the balance. It makes for an intriguing concept because the history of being literate has impacted those in power and the marginalized groups, especially with religion. Carnegie plans on weaponizing the Bible similarly to how slave owners utilized it with their slaves. The text in the Bible holds power and if only he has the capability to read, he can manipulate and twist it in any manner for his own gain. A desire he mentions explicitly which is why he obsesses over finding it, only to discover it has essentially walked into his town.

While Carnegie’s intentions have been pretty clear from the beginning, Eli’s remains covert for the majority of the film. He has been walking for 30 years now trying to make it west and ensures to read the bible every night. To protect himself and the book, he develops incredible fighting skills, including a blade so sharp it can cut off a human hand or head with complete ease. He gets multiple opportunities to showcase these skills as this world has plenty of people willing to rob, kill, and eat because of the lack of resources. Denzel portrays this stoic character pretty well, even if he’s not told to do much through the performance other than being cool under pressure.

The film looks like they placed a filter through it to give it a specific look. Almost like we’re looking at it through a pair of sunglasses as the sun poses a major threat to the eyes. It makes some of the action look silly at times, especially when they arrive at a certain house. Otherwise, the theme works all throughout the film with the importance of literacy and religion, but the final third has some questionable aspects, which comes to the detriment of the feature overall. It includes a revelation made at the end of the film, which does not really track throughout the rest of the movie, and an ending that medically does not make complete sense. In the hopes to make a big reveal to shock audiences into knowing more about Eli, it just left me scratching my head at how it did not hold up narratively. Larger issues with a film carrying several flaws, but I still found much enjoyment as I appreciate post-apocalyptic movies. They may cover similar ideas only with different circumstances, but I enjoy what they say about humanity when the tenets of civilization no longer exist in a conventional sense.

The Book of Eli provides some great Denzel Washington ass-kicking moments and an overall concept about the importance of literature to inform people. Information allows for free thought, and Carnegie hopes to hold a monopoly over it as he does with the water in his town. The film’s filter and environment take another look at the vile ways humans act when order has gone out the window and the carnal needs and desires take hold. It’s grim while also offering glimmers of hope and overall a competent film.