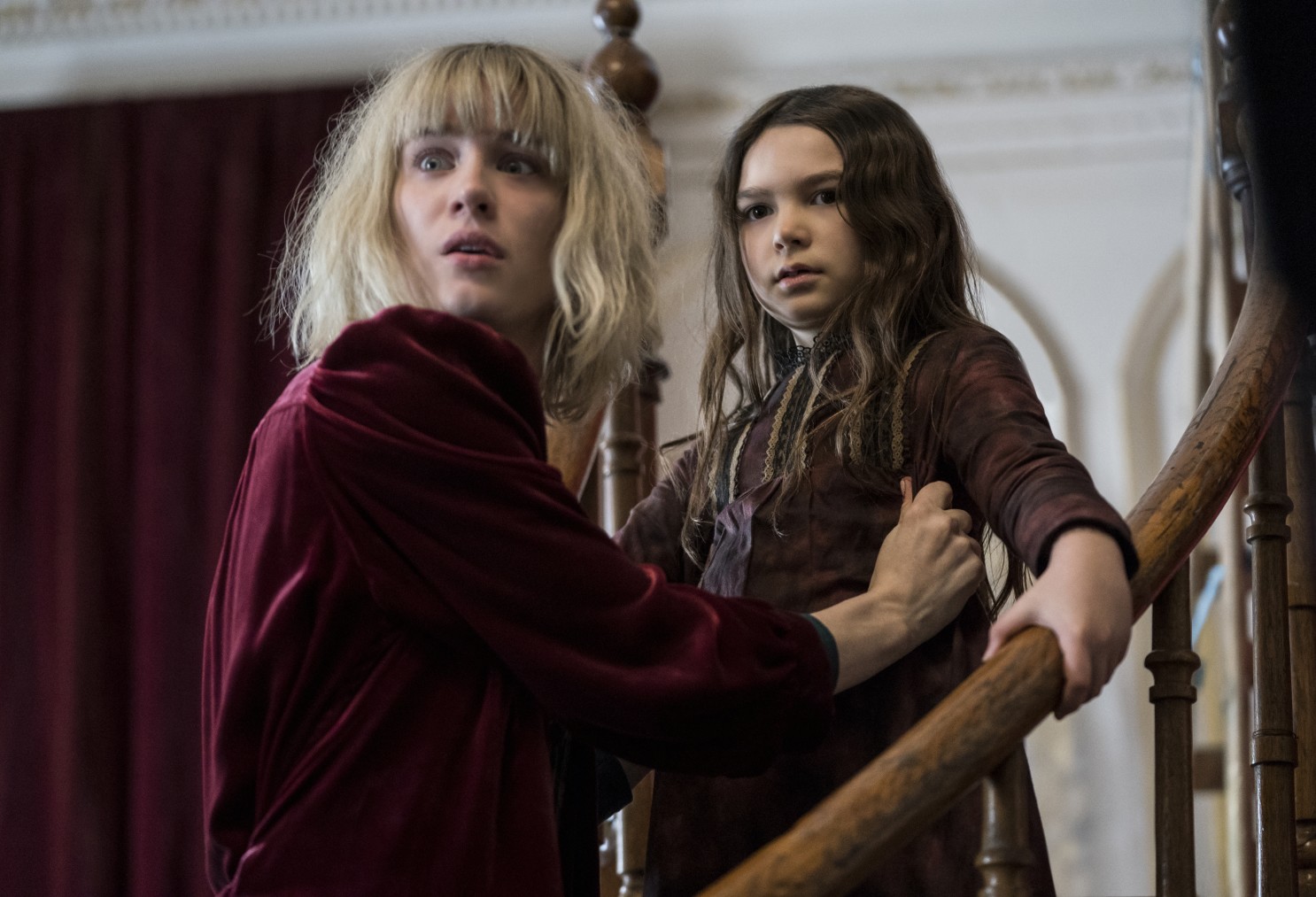 It’s okay to be average. Let us normalize this idea because some do not have the deft ability to do something much more meaningful. Unfortunately, The Turning proves to be an example where filmmakers tried to for a big swing but completely and utterly failed in their execution, eventually proving for the whole experience to be a waste of time.

In lieu of teaching for another year, Kate (Mackenzie Davis) has decided to take the job as an in-house tutor and governess overseeing the very affluent Flora (Brooklynn Prince). Now working in this majestic house, Kate must contend with the caretaker, Mrs. Grose (Barbara Marten), and the sudden appearance of the troubled teenage brother, Miles (Finn Wolfhard).

As with any horror film released in the early months of the calendar year, having set expectations becomes vital to the viewing experience. Studios all know what it means to have a film placed there and audiences do as well. At times, I am pleasantly surprised by the product but on most occasions, you are given a stern reminder of why the release landed so early in the year. The Turning proves to be the latter because instead of taking the beats of becoming an average horror feature, it attempts to be something deeper only for it to have nothing meaningful by the end. It battles with Kate caring for these two siblings and the idea of her mother battling through mental health issues.

Typically, stories of this caliber do not have the bandwidth to carry two larger concepts and it’s proven once again because these ideas do not come together in any meaningful way in the end. Instead, it wraps both ideas into something proving to be convoluted and deeply unsatisfying on multiple levels. Trying to swing for the fence is admirable and it normally pushes the boundaries of art, but the foundation of it must have some sort of substance.

Sizing up as a gothic horror story, The Turning places us in this haunted house where strange things begin to occur. Kate sees faces abruptly on her windows and feels hands touching her at night. Every scare comes with the typical jump-scare formula, but the film adds some decent hidden scares in the slower moments. Those happen to be my favorite, where a character walks into a room or hallway oblivious of something out of their sight but something the audience can see. Being within this gigantic house provides for plenty of those opportunities, but the scare sequences became incredibly repetitive with Kate walking where she should not be and then seeing something that scares the life out of her.

If anything this film will make you think twice about having kids because watching Kate deal with the incredibly rude and weirdly perverted Miles will make your head boil. Being the governess for these children presents itself as a different challenge for Kate, as she has become accustomed to working with kids in a classroom setting. While kids are not always the best to their teachers, there are means for accountability. These kids lost their parents and they hold all of the power of the house, especially when asking Mrs. Grose for any semblance of support. It makes everything a challenge for Kate and only gives me more respect for anyone who has to try and teach these thoroughbred kids and manage the large amount of privilege they carry with them from accomplishing nothing in their lives.

Mackenzie Davis tries her best in this role, but the entire story shortchanges her, which makes everything she does seem like overacting. The scares could not measure up to the truly good reactions she gave to everything happening to her. Brooklynn Prince does fine as the young Flora. It comes nowhere near to her breakout performance in The Florida Project, but considering the story and directorial differences, it’s completely understandable. The most interesting performance came from Finn Wolfhard, mostly known for starring pop culture hits, Stranger Things, and It. In his young career, he has portrayed sympathetic characters, but he’s the complete opposite in the role of Miles. As unlikable and unruly as any teenager could possibly be, Wolfhard took on a role to be the direct opposite of his previous credits and it was quite jarring at first. The cast undeniably has talent, but they had nowhere to go when they’re presented with such a terrible story.

Ultimately The Turning is an insult to the audience in the way it betrays everything occurring throughout the story. For its typical brisk horror runtime, it felt so long as it dragged. Every obvious scare sequence held no weight and I just waited for the story to end until it gets towards the climax. At this moment it went from mediocre to truly horrendous in ways I will obviously not disclose in this review. If you want to experience crushing and shocking storytelling then The Turning might be for you but for all others; please stay away and watch anything else.