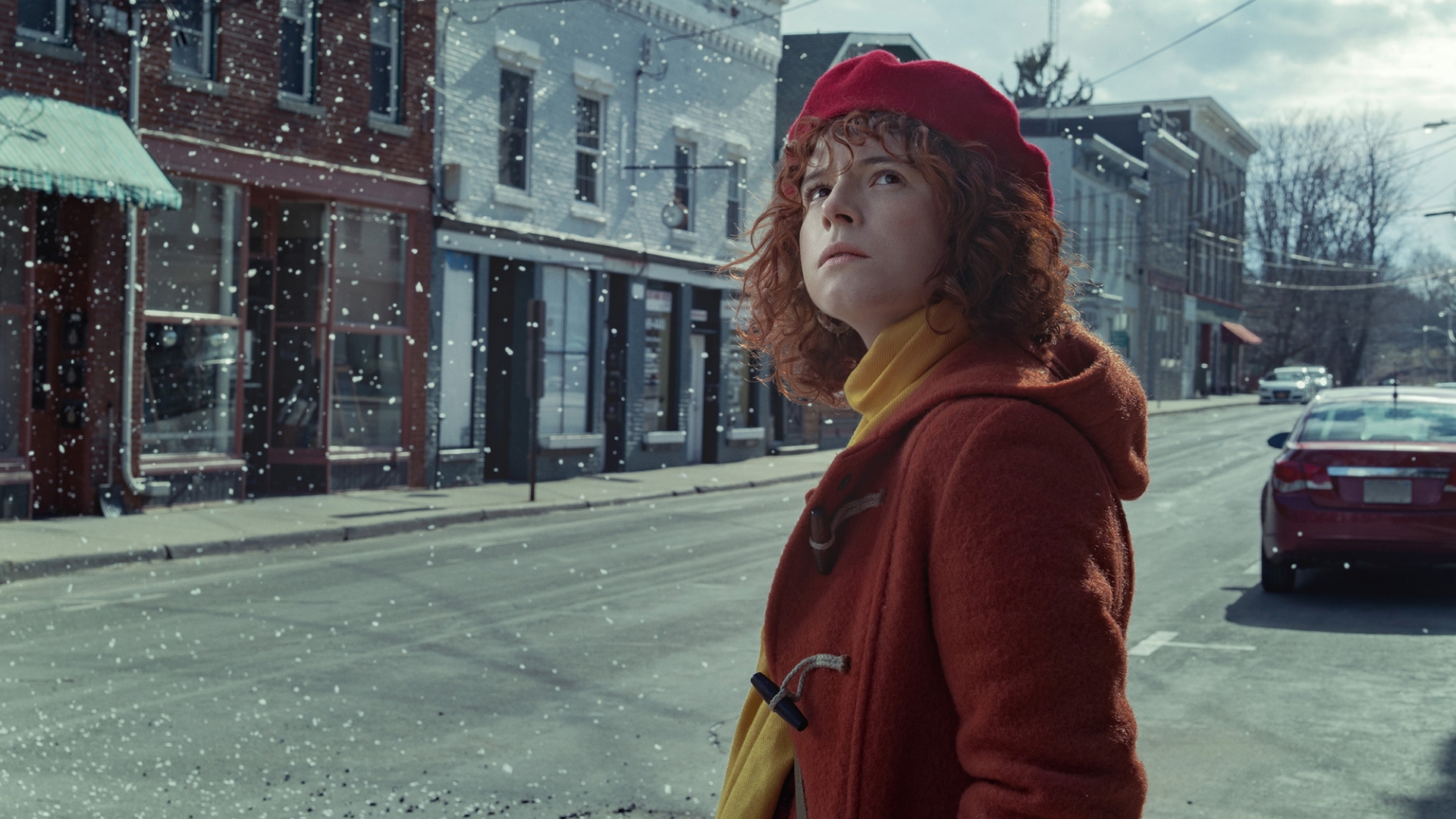 Social pressures of confinement can push people to their limits of civility. What may be an exercise in being kind can quickly push someone to reveal their true feelings. The uncomfortable nature of these confinements only begins to scratch the surface of the surreal and mind-bending I’m Thinking of Ending Things.

On the verge of wanting to break up with her boyfriend Jake (Jesse Plemons), a young woman (Jessie Buckley) agrees to join him in visiting his parents in a rural area. On their way there they discuss a variety of topics in the blizzard conditions. Upon their arrival at the house, the young woman begins to realize everything may not be as it seems.

I’ve said on my many occasions that I enjoyed a film so much I could instantly replay it, but I’m Thinking of Ending Things became the one instance where I actually came through with this statement. Incredibly haunting and difficult to parse through, this film required two proper viewings for me because of the density of the dialogue and how abstract its concepts prove to be. Watching it once provides the kernel of trying to comprehend the plot of this majestic feature, but the second go-around proved to be even more rewarding because its themes come together in a purely magnificent manner. The bending of reality this film employs contributes to the difficulty in writing about what occurs, as what you start with unravels into such a different type of story. In this review, I’ll attempt to do my best to remain as vague as possible, but I do encourage anyone reading this to watch the film first to experience this puzzling yet mesmerizing work.

Based on the synopsis, you can see the character portrayed by Jessie Buckley gets credited as young woman, which does not occur because she’s called that throughout the feature but rather her identity remains ambiguous. Initially called Lucy when she enters the car to join her boyfriend for this trip home, she also gets called a variety of names, which muddies the water of her identity but also begins the hints of this story not being straightforward. As the film progresses her profession and interests begin to shift from quantum physicist to artist, and even a poet. It becomes clear, we never fully know who this woman is, but better yet it becomes more important to realize what she represents. Once you get this idea nailed down, it becomes the key to understanding exactly what this story attempts to achieve.

Undoubtedly the best aspect of this film comes through in its dialogue between the characters. Flooded with references of poems, books, movies, and songs, nothing appears to be out of bounds within the conversation held by this couple in the car and when they eventually get to Jake’s parents’ home. Through reciting poems and other deeply philosophical ideas, each sentence begins to peel back a layer in attempting to learn more about this relationship and why the young woman continually thinks she wants to end things. Both of these characters obviously carry a level of intelligence, which makes these conversations rich, but it’s in the way they deliver these tidbits that show their true personality. The range of ideas covered goes from the concepts of time and the discussion of the controversial tune “Baby It’s Cold Outside.” With the dialogue being the focal point of the story, it needed to be engaging and it certainly succeeded in doing just that.

Line after line of this dialogue could be broken off into its own story idea, but it flies off like a fleeting moment within these conversations. There were instances where I needed to rewind to fully grasp what the characters just said and I waited for it to be expanded, but it never arrived. Having these grand statements leave the conversation entirely becomes the point because what we see does not have the real-world implications we expect. It begins by simply seeing the two characters not wearing seatbelts while driving through a blizzard. Who does that?

Charlie Kaufman took on this film as his next project, which he adapted from a novel of the same name. While not aware of much from the source material, this story has Kaufman written all over it. For my money, one of the great American writers of our day, he continually pushes the envelope of how stories can be told and the impact it can have on our psyche. No one should walk into a Kaufman directed or written film thinking the story will play out in a straightforward manner. Heading into any of his projects I find myself trying to be more aware than with any other filmmaker because at some point everything we see will shift before he drops the hammer of what he truly wants to say with his stories.

With I’m Thinking of Ending Things, Kaufman beautifully combines his excellent writing with his assured directing style to bring together this tough story. He leaves much to interpretation, which I love because people can take multiple meanings out of what occurs in the story depending on their way of life. It becomes personal similar to when the young woman speaks on the way she views her art. She expresses her landscapes based on how she feels and similarly, Kaufman allows the audience to view the art he creates and allows us to manifest our own feelings towards it.

Even in a literal sense without diving deeper into the symbolism covering each frame of this feature, this film works at creating uncomfortable circumstances for the young woman. It begins right away on the car ride to the parents’ house. How often have any of us been stuck in a car ride with someone we’re not sure how to speak to? Things can get so awkward because you’re confined into this small space where you breathe the same air as the person but cannot find anything of substance to speak on. It’s surely happened to me, which makes the drive feel like an eternity and produces a level of anxiety that could make the calmest person lose their cool. This makes the moment when they arrive at the house a moment of intense catharsis, only for it to get worse. Again, have you ever been at an event where you were driven there by somebody else and wanted to leave but your ride continued to drag out the exit plan? It puts you in a place of running out of polite ways to ask when they plan on leaving. Yes, more agony, which this film eloquently provides for us.

While creating a constant state of dread and discomfort, I’m Thinking of Ending Things also beautifully manages the balance of tone with the temperature of its environments as strange as it may be to say. When in the car, with the blizzard raging around them, the mood accurately matches the characters in their cold method of delivery. The frigid temperatures would push someone to want to cling to another for warmth but this never really occurs between them, because of the lack of heat remaining in their short-lived relationship. Conversely, the warmth presented in the house helps let the coldness begin to slightly melt away but just for a few sparse moments. The lighting plays a major factor in this happening, but it also comes through in the performances by the tremendous actors.

After her terrific breakout role in Wild Rose, Jessie Buckley officially announced herself to the world as someone to look out for and she smartly followed it up by starring in a Charlie Kaufman film. With this performance, she reaches such a sublime level of acting even I did not expect from her. She presents a level of calm one can only contain for so long because this experience only proves to provide discomfort for her character. It makes the moments where she officially blows up in demanding what she wants that much more meaningful. Buckley expertly manages every emotion occurring in this feature and the monologues she provides whether through reciting a heartbreaking poem or her impersonation of Pauline Kael signifies greatness. Every other performer of the small cast also came to play with Toni Collette proving once again we do not deserve her. She portrays Jake’s mother and evokes the massive range of emotions this character brings. Seeing her at an epic dinner scene definitely gave me flashbacks of her jaw-dropping performance in Hereditary and once again she delivers.

I’m Thinking of Ending Things gives plenty to think and write about. After watching it the first time, I needed to take a walk to simply piece together all of the stunning developments. The story never left my mind and infected me like a virus, as explained in the film. It certainly can be viewed as Kaufman’s least accessible movie, but it turns out to be the most rewarding with how it invites you to peruse through the density of its material. An absolute masterwork by this brilliant mind and one I will continue to think about long after I conclude this review.