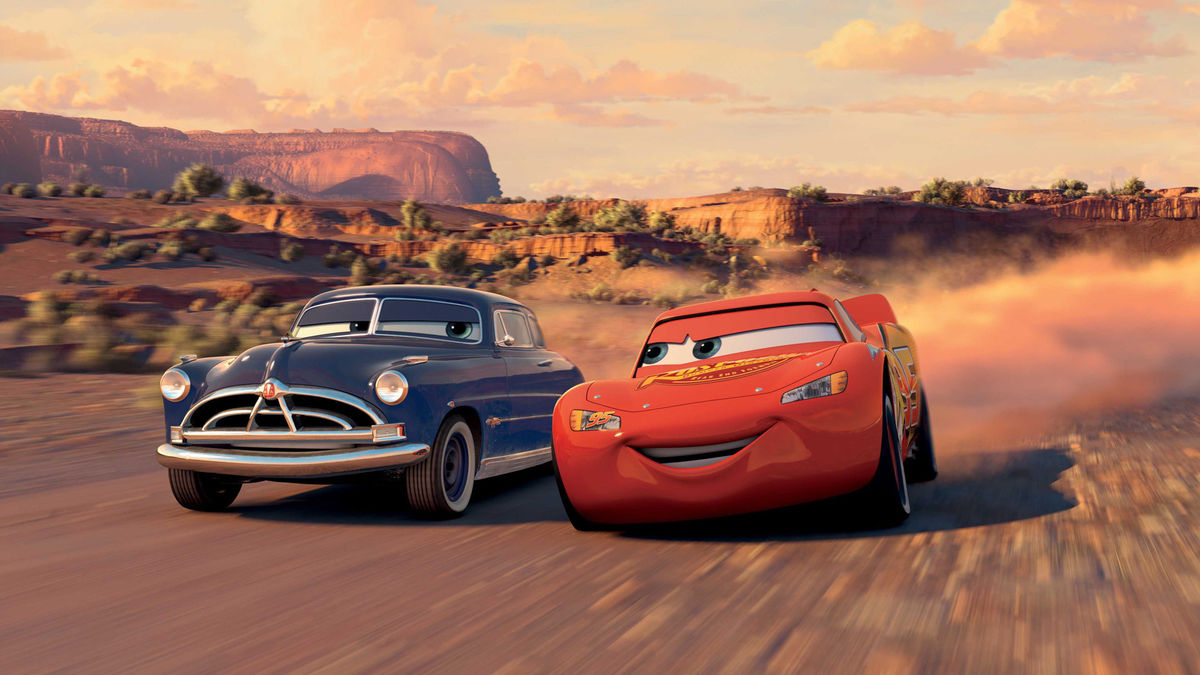 When fixating on accomplishing one goal in life, we tend to get a tunnel-vision so narrow other aspects of life fall by the wayside. It comes with the price of success and how many of the most successful people at the top made a good amount of enemies on the way up. Gaining a new perspective allows for a shift in attitude, which the leading vehicle receives in the heartwarming Cars.

Known for working on his own and never having a consistent pit crew, Lightning McQueen (Owen Wilson) gets stranded in a small town named Radiator Springs on his way to California to win the Piston Cup. After wrecking their town, McQueen must pave the road in order to leave as the date of the race gets closer and closer.

A world of cars follows the long line of films where vehicles and inanimate objects become sentient beings. Even in the clever ways it attempts to make them more human, something about them always lingers in my mind as what we’re watching inherently possesses some disturbing elements. It’s a large rabbit hole to jump into so I’ll spare you my thoughts on that but instead, I’ll tell you why Cars prevails due to its heartwarming story about finding family in the most unexpected places.

The story revolves around McQueen and his arrogant behavior. He comes from the big cities and upon his arrival to Radiator Springs, he looks down upon the small town as a dump. The allegory being played with here becomes quite clear when equated to humans and how others used to the amenity of cities may perceive small towns to be some sort of time machine into the 1950s. This sort of elitist thinking certainly exists and it comes through in McQueen. He learns throughout the film to not judge others and gains a bit of humility, which was a long time coming.

Cars takes an interesting look at the ecosystem of these small-town economies and how quickly they can be ravaged by innovations. With Radiator Springs, they used to thrive with their quaintness but lost essentially all sources of money after an Interstate allowed cars to pass by the area in a more direct route. Something made for the good of travelers to get to their destination quicker by ten minutes has completely demolished a small town. It compares to states like West Virginia, which have struggled as the prominence of coal has decreased in recent years. This concept works full circle and makes an eloquent point in the movie.

Even if not knowing the cast of Cars, it becomes obvious right away who voices McQueen. Owen Wilson would not make the most obvious choice for a hotshot young speedster but selecting him proved to be the right choice. Wilson brings the lightness of his voice and utilizes it well in the more vulnerable moments for this car. The source of comic relief comes in the form of Mater the tow truck voiced by Larry the Cable Guy. This character captures the essence of Radiator Springs and displays the faults in McQueen’s understanding of what it means to be in a small town. Mater drops the best lines as any source of comic relief would and certainly contributes to the plot and the progression of the protagonist.

It became interesting to notice the messaging of the film and the balanced way it looked at life in small-town America. The film both shows the charms of living in these towns, but also spends a good amount of the runtime making fun of the people choosing to live there. It first makes an appearance when McQueen dreads having to interact with the fans of his sponsor. These cars represent stereotypical southern men and not in the most flattering way. It goes back and forth with the mimicry and adoration and overall its message irons it all out.

While the topic area covered in Cars typically would not be of much interest to me, the central message of McQueen finding his home in places he would least expect rings true. The last place he assumed he would actually make friends appears to be in a flyover state. Everyone wins from the life they choose and it makes for an entertaining and heartwarming kids movie adults can resonate with as well, which has become Pixar’s calling card.