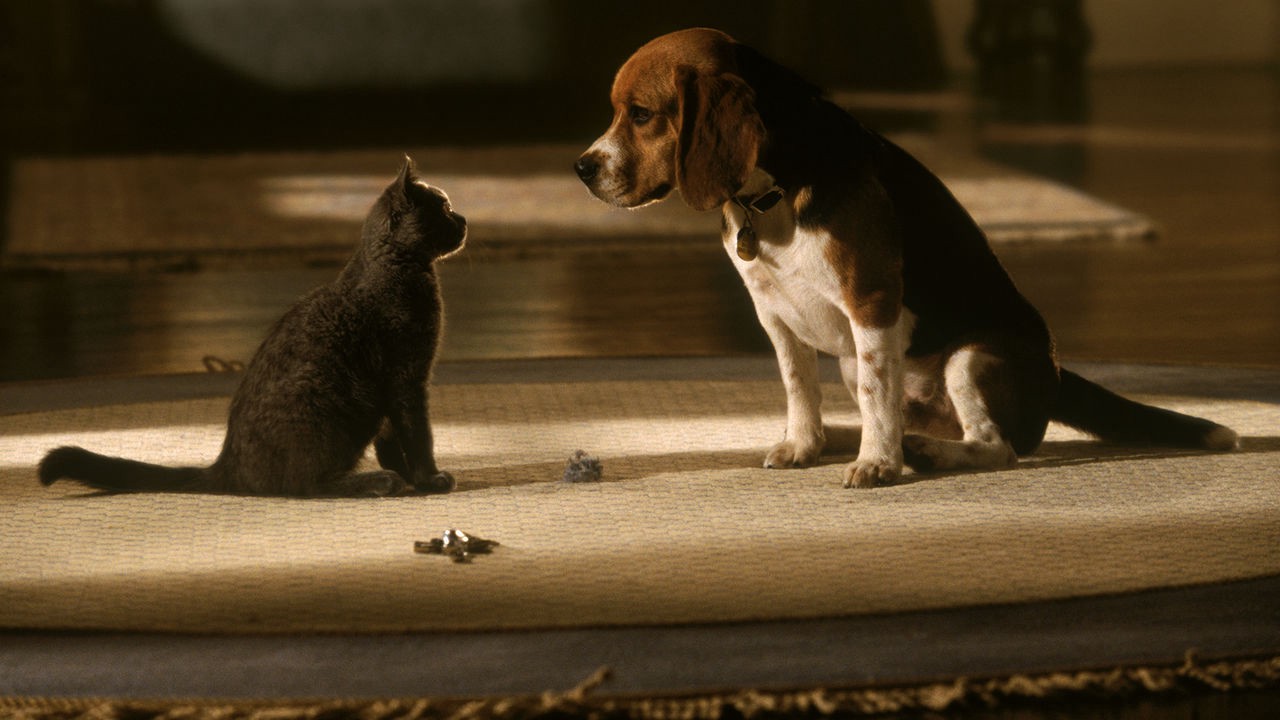 While we may see pets as dutiful companions in life, who knew they run massive agencies set on controlling us? An interesting premise at the very least and one done without much thought outside of a few decent puns. While geared towards children, Cats & Dogs fails to tell an engaging story despite the cute animals it utilizes.

With the advent of a possible vaccine that could eliminate dog allergies amongst humans, a group of cats led by the evil Mr. Tinkles (Sean Hayes) seek to destroy it. However, an agency of dogs stands firm to protect this vaccine, and all of their hopes land at the feet of an inexperienced puppy named Lou (Tobey Maguire).

Posted on Time Square and various posters, young Josh longed for the chance to watch Cats & Dogs. As a lover of dogs even at a young age, I yearned for the chance to watch a film where dogs would be pit against their greatest rival, cats. My mother never did take me to the theater to watch this film and with good reason, because even for kids, this film never really comes together to provide any sort of worthwhile entertainment.

Part of the flaw comes from the marketing. Take the poster where it pits the various dogs and cats against each other with the tagline “Who will you root for?” This gets set up as somewhat of a conflict, but it spends the entire film setting up cats as evil beings from the depths of hell. We get to see a history lesson of how cats had a presence in ancient Egypt but instead of being good pets, they ruled over humans and forced them to build monuments in their honor. Humans would still be enslaved to these felines if not for an uprising of dogs who rightfully took their place as man’s best friend. Listen, I’m a dog person myself but this film never gives cats a chance. It’s almost insulting to believe everyone would have a dog instead of a cat and the only reason they would not own a canine comes from being allergic. So going back to the tagline of the film, there truly is no choice in who to root for here.

Outside of that diatribe of mine in the previous paragraph, as a film, Cats & Dogs features some disturbing animation of its animals. It shifts between three stages of how it presents the cats and dogs. It goes from showing the actual trained animal to animating its face to talk like a person, and then as puppets for the more complex actions necessary for the story. The challenge of focusing a story on animals that can only be trained so much definitely straps the film’s ability to not look like an abomination. Each time they animate the dog and cat faces, it looks terrible. Obviously, other films noticed the lack of quality of this attempt and then focused on having them speak without moving their mouths or simply just fully animating the animals. The shift between these three presentations became distracting from an already subpar storyline.

The main thread occurs with the development of Lou as a secret agent. He mistakenly gets picked from a puppy farm and must now protect this vaccine, which is in the process of being made by his owner. It gives him the opportunity to learn what it means to be a good dog and console a young boy who just recently lost his old dog. The film would have been much better had it focused more on Lou’s relationship with the kid, but instead, we get all of this secret agent nonsense. Lou gets mentored by an older dog named Butch voiced by Alec Baldwin. Butch becomes a reluctant father figure for Lou and still has the emotional scars of being abandoned by his previous owners. Their relationship, again, would have been better to focus on rather than horribly animated stereotypically Asian cats using martial arts to try and fight Lou in search of this vaccine. It’s easy to see why they chose the lazier route, as its target audience is young kids. Heck, the marketing and premise worked on me when I landed within the specific target audience for the movie.

Kids may enjoy the experience of Cats & Dogs but I implore any parent out there to instead watch the variety of other pet-inspired films with plenty of more substance. Instead of focusing on the genuine heartwarming aspects of its story, this film decides to go for spectacle and push past what it could accomplish with the technology available at the time. It feels derivative of everything in this era including Toy Story where the dogs see a human and pretend to act like normal dogs when they have more intelligence than their owners. If you’re a cat person, you have a right to be offended by this film, as it gives absolutely no redeeming qualities of these poor felines.