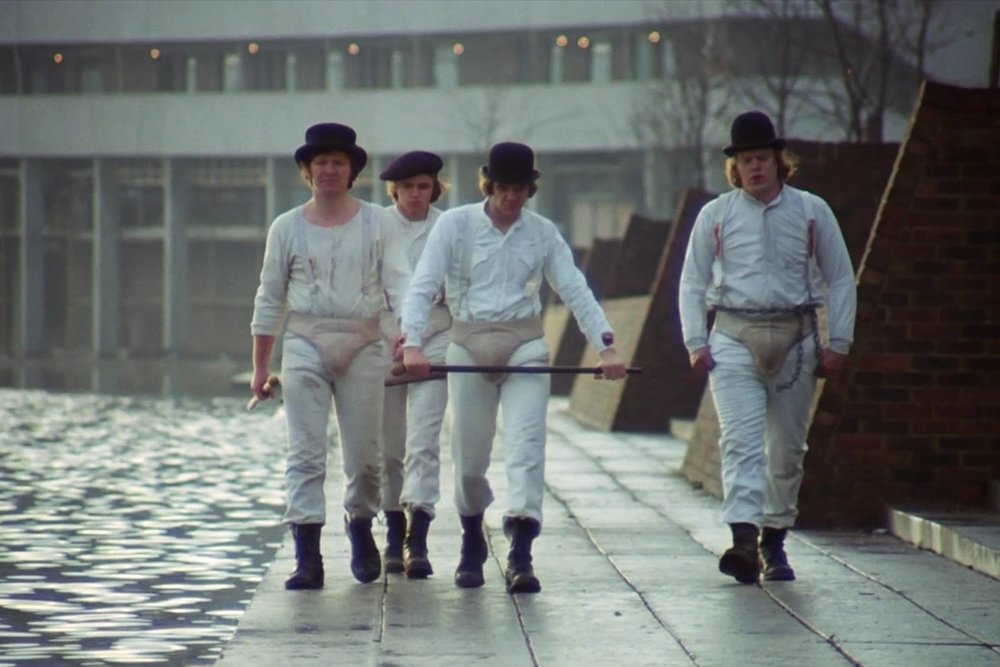 Defining what it means to be good comes with several loaded interpretations. You can ask an assortment of people and you’ll get different definitions, as it depends on the outlook of the person answering the question. Trying to hammer down one defined version of what it means to be good crosses a line to take away distinctiveness and individualism, which A Clockwork Orange tries to parse through along with a bevy of other topics. Difficult to sit through but ultimately incredibly effective in its style, you will never forget the experience this film puts you through.

In a future not too far away, Alex DeLarge (Malcolm McDowell) goes around doing whatever he wants with his droogs, including indulging in some ultraviolence. When he gets caught in one of those endeavors, he gets sent to prison but takes on the opportunity to join a program where medical doctors attempt to cure the disease of crime.

Infamous for its violence, but incredibly poignant, A Clockwork Orange tells a gruesome story about a horrifying future. Everything looks drab, apartment complexes look completely rundown, and apparently a group of guys in ridiculous costumes feel like they can go around and do whatever they want. This horrible introduction to the world shows Alex and his droogs beating down on a homeless man and participating in an awful rape scene. Seeing those first two major scenes may turn many off because of the pure evil we see on display. The dementing nature of it becomes the point, as it sets up the character of Alex and the larger world he comes from.

Alex’s age remains undefined throughout the story, but he’s a young man purporting to be older and more mature than reality bears. He listens to Beethoven’s music to almost a ridiculous degree, tries to use overly proper language, and galivants around the city commanding the droogs behind him essentially getting away with all of his sick desires. Even with the maturity, he likes to espouse, the story continually tries to bring him down to Earth and point out what makes him a child. One way comes in the form of this secret language of words, which takes away the sharpness of the English counterparts. You almost need a whole different dictionary to fully comprehend each word, but the context clues speak for themselves on most occasions. In a way, it infantilizes him while he tries to act like an adult, which creates a conflicting feeling for the audience.

This film lives with the conflicted nature of the characters and the story overall. Constantly, different events occur that almost contradict each other at the very moment. For example, in the rape scene at the beginning, Malcolm McDowell’s improvised selection of belting “Singin’ in the Rain” utilizes a song meant to evoke joy in the middle of such a petrifying scene. I can see why Gene Kelly was not a fan of McDowell for it, because the association of the son became tied to this heart-wrenching sequence. A Clockwork Orange continually throws in different classical tunes in to the story, which typically stands for elegance and class, only for it to be visually displaying such crass actions, but it’s done because of this being Alex’s story. The film even opens in with a close up on Alex’s face staring right at the audience in such an uncomfortable way. As the camera slowly zooms out to show the rest of the surroundings, it shows other characters looking in different directions but Alex’s gaze remains on us. It’s almost like he knows we’re watching his story and speaks directly to us. The character narrates the film, which automatically makes him an unreliable narrator because of his actions, but the song selection matches this underserved perception Alex has that he’s superior to others while acting in such an animalistic manner.

While this remains Alex’s story throughout, A Clockwork Orange works on a different level of attempting to define goodness. With crime being rampant in this area of England, different techniques have been attempted in order to bring the crime rate down, which leads to the psychological activity Alex volunteers for. In order for the much lighter sentence in prison, he opts into this program, which seeks to make it physically impossible for someone to commit an act of violence ever again. The presence appears in one of the more iconic scenes of the film, which includes Alex sitting with his eyes forced open watching a sequence of scenes on a large screen. This method looks painful, but it proves to work in making Alex physically repulsed by the thought or action of violence and sex. Objections arise because this takes away the free will of a person but it’s meant to go towards a greater good. This opens up the conversation about what it means for someone to be sent to prison.

Sent there for a heinous crime, Alex enters an unrecognizably structured world right from the onset. When he arrives to turn in his materials, he hands in his belongings one by one, which gets described loudly by a security guard. Every single item gets this loud attention to an incredible amount of detail, including one where Alex gets called a fraud upon hanging in his imitation red leather notebook. The system this guard would prefer includes making these prisoners suffer for the actions that brought them to prison. A sentiment many would share after seeing the actions of Alex preceding his sentencing. However, prison works at its best when it helps to reform people so they can become a better person when they re-enter society. This psychological treatment tries to get to an ultimate reform where the person cannot physically commit the crime again, but does it count if the person’s attitude remains the same? With this process the people behind the treatment are looking to fix the symptoms of the larger issue of crime happening in their town instead of looking at the larger systemic problems giving rise to people like Alex. The issue becomes a political one in the film, as it shows where the real interest lies in this sort of reform.

As much as the first act of the film allows Alex to indulge in his sick desires, the story gives a good amount of satisfaction in the retribution he receives when he is released from prison. For someone who felt he had so much power at the beginning of the feature, it feels great for him to receive his comeuppance, especially from those he harmed in his past tirades. For some, it may not make up for his terrible behavior, but it becomes vital to display the story and look down on Alex and his actions even if it appears to be doing the contrary in the earlier parts of the story.

On the technical side, this film creates a strange production design, as it introduces us to this world. As the opening scene displays, this world is hypersexualized to a completely uncomfortable degree where Alex and his droogs sit in a bar with female mannequins in the form of tables and repositories for their drug-laced milk. Much of the artwork in the houses we see focus on the female body but not in a way where it appears to be honoring them, but rather how the men of this world prefer to see them. The gaze upon these women within this artwork is strongly masculine, which makes what could be seen as empowering art into something incredibly perverted. The world feels full while also being incredibly cramped because everything begins to come down on Alex and his treacherous acts. The score of the film has a scintillating tune, which plays throughout, but I love the little bits of what would become the main theme of Kubrick’s The Shining. It popped in there a few times throughout the film and it gave me goosebumps even then.

Stanley Kubrick’s methodical process gets plenty of rightful criticism, but the results speak for themselves in this masterful work. He works through this incredibly complicated story and balances all of the themes flowing through it. He needs to manage telling this story through the eyes of Alex, while also condemning the person he is and the larger society helping to create such a monstrous young man. The camerawork shows incredible precision as what would be expected, but he really tried some daring shots in this feature, and he never steps away from a challenge. He’s my favorite director for a reason, and he absolutely stunned me with this film.

Brutal at each step, A Clockwork Orange should be noted to need a content warning before anyone attempts to watch it but it tells such a damning story. Not only for an individual but for a larger system trying to control a disease in such an ineffective and immoral way. Everything looks stylized because Alex continually attempts to purport himself as someone important, but he’s a fraud in every level of his personality. The roller coaster ride he goes on makes for an equally horrifying and satisfying journey and it comes from the brilliant story and the fantastic collaboration by everyone involved. A truly vital piece of art, which will have scenes and certain images burned into your brain forever.