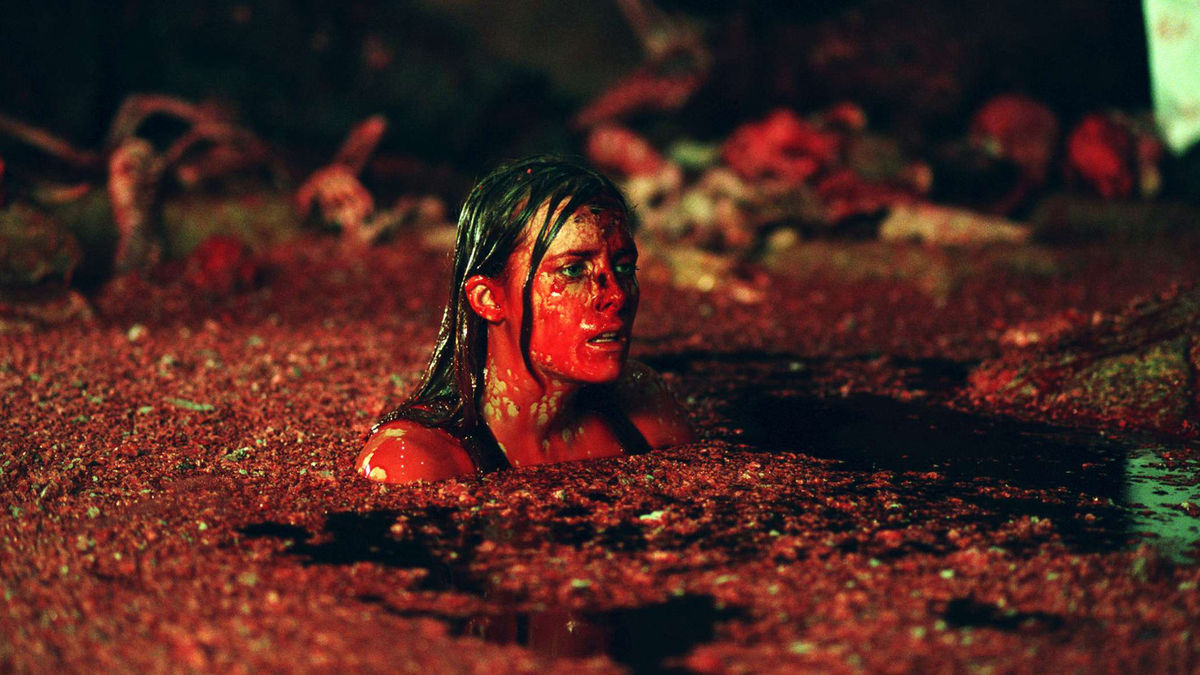 The activities some people find fun will never cease to astound me, as it can range from small hobbies to death-defying feats. Some people just need that adrenaline rush to make them feel alive as they narrowly escape the clutches of death. This gets highlighted in the gruesome movie, The Descent, which plays on many fears and will attempt to make the entire viewing experience one where comfortability comes at a premium.

Following a tragic accident a year ago, Sarah (Shauna Macdonald) reunites with her friends for a caving expedition. The six friends enter the cave and discover they have been to a place no one has discovered yet, which makes the pathways of exiting unclear, especially when their entrance gets blocked off. Now, with them unsure of their way out, they begin to see the appearance of some monsters in the cave.

Listen, I’m sure the thrill of going caving and discovering new places adds some thrills, but the amount of danger found in these activities far outshine the potential benefits. The Descent seeks to prove just that and does so emphatically. A trip meant to be a good time for a group of friends ends up having them essentially enter hell and their expertise gets challenged. Everything goes as badly as one can imagine for this to be an enjoyable experience for anyone and that’s before the inclusion of the monsters.

It all begins with one of the friends taking them to an undiscovered cave instead of one that has documented entrances and exits throughout. This confirms no one knows the way out and they must use their survival skills to find an exit, if one even exists. No one knows where they are, which only makes things worse as they need to traverse in the dark with their light supply being fairly limited. The fortitude of the relationships between these six women surely gets put to the test and reaches its limit at times.

The greatness this film reaches occurs even before the monsters arrive, with its tight and claustrophobic style of filmmaking. Spaces in this cave come at a premium with multiple scenes showing these women crawling through very tight tunnels, which serves as a nightmare for anyone terrified of tightly constrained spaces. I would not consider myself claustrophobic, but even I was made extremely uncomfortable by the spaces and how little room these women had to navigate. One character, in particular, has a moment of struggle where they get stuck, which had me just looking away because, with the lack of real estate available there, the options of turning around gets more limited as they get deeper in the cave. Neil Marshall’s direction becomes key to making it such a dreadful experience, which makes me question once again why anyone would find this a fun experience.

Dread builds solely from the claustrophobic spaces, but then the monsters arrive. These blind creatures, who move by sound get introduced and begin killing off these women. They do not receive a proper explanation, as it appears they have humanoid figures. Perhaps they could have been people who mutated in a strange way, but the film does not care to explain nor does it need to. The only thing we know is these things are trying to kill these women and they must survive and escape. Adding in these creatures changes the dynamic of the story where their appearance adds more space to the story because they crawl around and attack, but with this switch, it becomes a monster movie and loses what initially brought scares. The story could have maintained its claustrophobic feel, as it was scary enough in that regard and while the addition of the monsters does not come as a detriment, it does shift the movie into another creature feature where the protagonists must survive. The cave alone was scary enough.

With darkness being a major hindrance for the women in the cave, it became difficult to tell these characters apart. The conversations held prior to entering the cave sought to establish each of these women and their defining attributes, but it all gets lost when they enter the cave where it becomes difficult to discern the identity of anyone. All I could decipher is that it was one of the women screaming and running away from these monsters. It would make sense for the purposes of the story if not for the fact they showed the gruesome accident at the beginning that specifically impacted Sarah. The emotional baggage did not carry over because I could not tell who was Sarah for almost the entirety of the time in the cave.

All of those qualms but aside, The Descent delivers some strange scares and puts people in a place of their nightmares. Not only are they stuck in a place where they’re unsure if an exit exists, but they also have to fight off these disgusting-looking monsters. This film loves its gore with some bone-crunching sequences that will make even most iron stomachs feel a bit queasy but overall it shows that caving is so dangerous and should not be tried by anyone because you never know what lurks in the deepest and darkest corners of the planet.