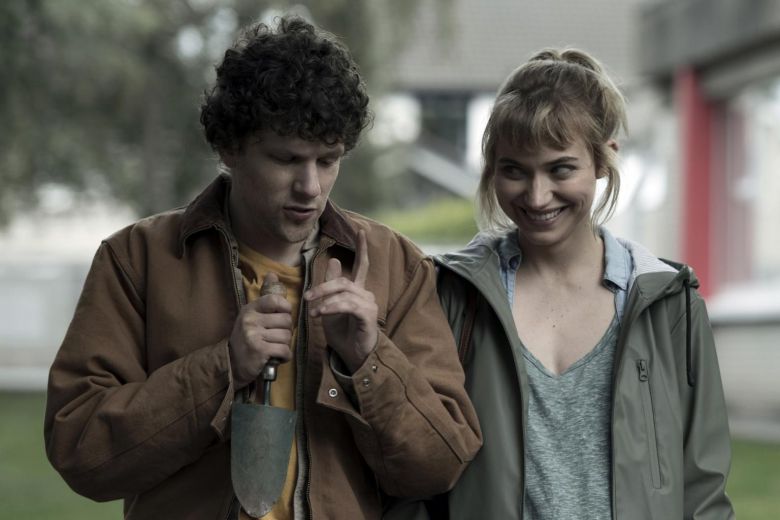 Suburbia being an unavoidable vacuum people should run away from has been used as an anchor for many films and TV series, but none have literally made it as suffocating as the ambitious yet lackluster Vivarium. With a very intriguing premise, it runs through it very quickly and proves it did not have sufficient thread to turn it into a complete feature film.

Young couple Gemma (Imogen Poots) and Tom (Jesse Eisenberg) are looking to potentially buy a home together when they visit the site of a new development being made. When taken for a tour, they notice their guide has disappeared and any efforts to leave has them going in circles and stuck in this development. After attempts to leave they receive a box with a baby they must raise and only then will they be given the chance to escape.

The premise behind Vivarium certainly cannot be played down because it has merit in the fears young people, in particular, have about moving out into suburbia. Being farther away from the city and the rest of the youth in the area forces a type of lifestyle some people will never be willing to accept. For Gemma and Tom, it literally gets forced upon them as they cannot escape. The manner in which they piece together their situation comes with plenty of tension as it appears to be a horror film in those moments. Every house has the same green paint and similar configurations. Every time they try to find a way out they always end up at the same house, number nine. A truly horrifying sequence as they begin to discover that there’s no way out and try to seek some help. The setup is undeniably fantastic, but the film struggles in actually finishing it off in a meaningful manner.

As Gemma and Tom take each day raising this child, they begin to lose their minds because they continue to realize they are living a complete nightmare day after day. It certainly does not help that the kid they must care for screeches whenever it does not get what it needs. Every morning it screams in a high-pitched tone until Gemma or Tom pour the cereal and milk into the bowl and hand the boy the spoon. This particular scream really makes the case for corporal punishment because it could burst an eardrum if one were to stand too close. Caring for the child is the last thing they wanted and now it becomes their only escape from this suburban hell. Their relationship does not get much of a backstory in regard to the duration and if they have any plans to actually have kids. The closest indication received is when the realtor asks them if they have any offspring to which Gemma states “not yet.” If they ever planned to have kids, this situation would certainly scar them from doing it in the future.

Vivarium begins to lose steam when it falls into repetitiveness with its story, which shows the writers did not have as much substance as they believed with this idea. It gets even worse when the end approaches and things begin to get strange, but little to no explanation gets offered to give any meaningful payoff. The narrative’s ambiguity certainly carries intrigue but to offer seemingly nothing to explain the strangeness of this community makes the conclusion dissatisfactory. In a way, it all feels pretty pointless by the end as it offers no answers to a truly peculiar circumstance. The overall message remains clear but the execution felt lacking any real conviction or imagination.

As an acting two-hander, Imogen Poots takes control of the entire movie with her scintillating performance. While her character keeps it together mentally longer than Tom, the moments where she begins to crack demonstrate some strong acting. She’s given plenty to do in the story as she anchors it all. Gemma spends the most time with the boy and must react to the truly gut-wrenching behavior he displays. Poots has to take on the dreadfully emotional moments where she continues to face the horror of this circumstance and it shows she’s ready for that true breakout role that will give her the recognition she deserves.

Incredibly intriguing but disappointing by the conclusion, Vivarium would be worth watching just for the plethora of unsettling moments it brings forth to the audience. It will push you to find the limit of how much you can put up with a child from hell and what the breaking point of sanity would be. The story would have been better off as a Twilight Zone or Black Mirror episode and certainly should not have been stretched out to be a feature-length film.