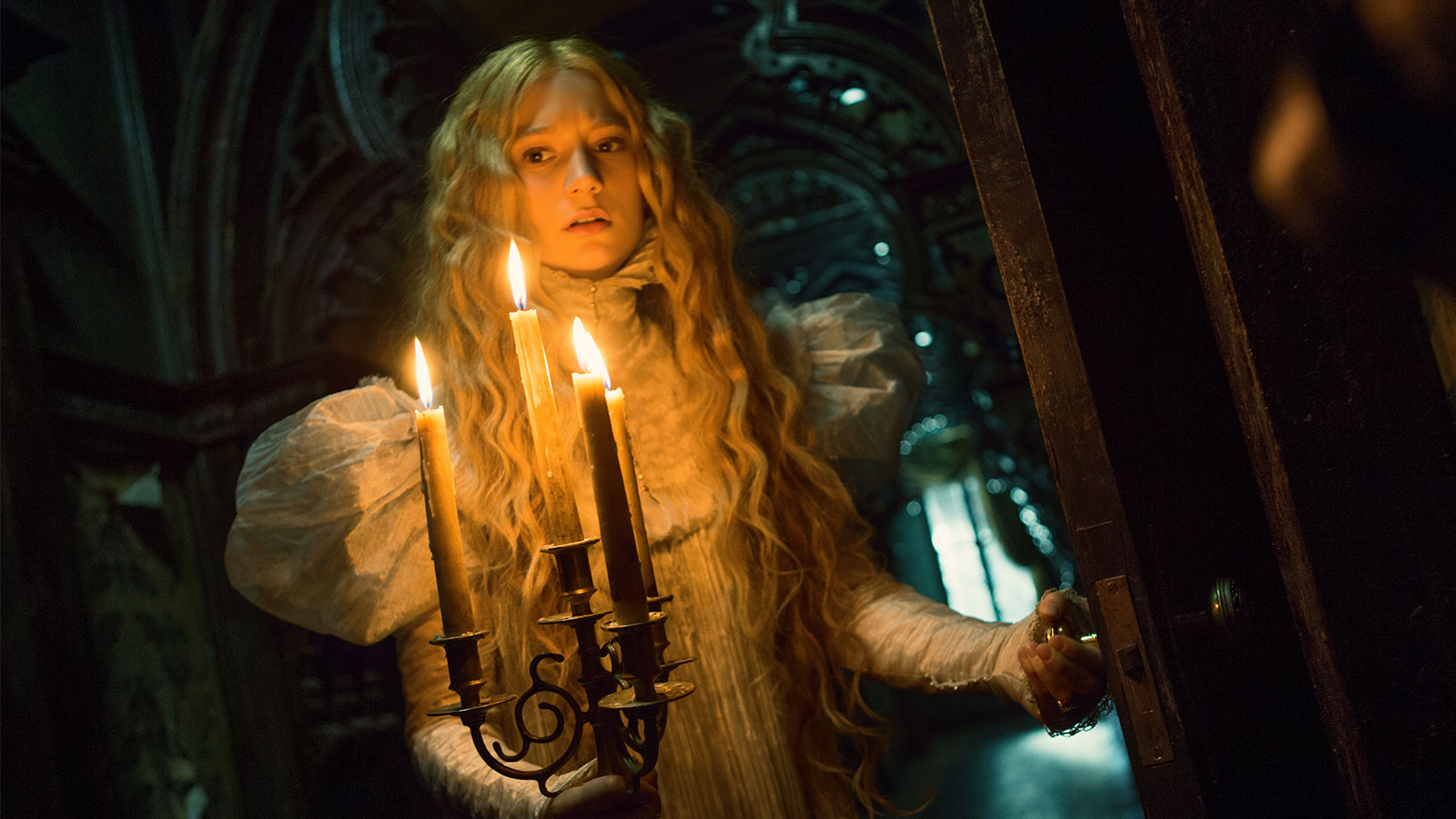 Marrying someone after knowing them for a short amount of time rarely results in a functioning relationship, no matter how much fairytales attempt to convince young folks otherwise. In Crimson Peak, we see the beginnings of what could be a fairytale love, but instead shows the true horror of being wrapped up with the wrong people. A complete showcase in style without a story to match it, this film presents plenty to enjoy.

In her hopes to be a writer, Edith Cushing (Mia Wasikowska) lives with her father, who receives a visit from a dapper young man named Thomas Sharpe (Tom Hiddleston). After having his innovative idea rejected, Thomas and Edith get acquainted and form a lovely bond, which leads to their marriage. A love threatened when they move into his family home and she begins to see apparitions.

Giving Guillermo Del Toro a sizable budget to work with will never disappoint when it comes to the craft. The man knows how to hire the right people in order to create majestic production and costume design, and it proves to be the greatest strength of Crimson Peak. From the very beginning, the craft on display looks gorgeous, but it reaches its peak once we arrive at the Sharpe family home, which becomes a character of its own. The impeccable design of this film says plenty about Thomas and his sister Lucille (Jessica Chastain) along with the history this physical structure has. With a hole in the ceiling, the winter conditions make their way through, along with the red clay under the floorboards able to squeeze through like a fountain of blood. All of it looks tremendous because the second Edith enters this home, it becomes apparent some bad things have happened here.

Environmentally, the house plays such a big role and every corner of it will make you question how anyone could possibly want to live here, which gets at the larger ideals behind Thomas and Lucille. Their insistence on making everything work for them in this home raises some red flags even if it stood as a family monument for some time. It further demonstrates the vital nature of this structure and how it tells its own story. The paintings on the walls carry their own source of trauma and the weird rooms with antique devices make you question whether we have entered an actual home or a haunted house. This intrigue continues to build because Edith has limited access to every space in the house, and the only one who seems to have limitless control remains to be Lucille with her giant collection of keys. Where they lead asks big questions, but unfortunately, the answers did not carry nearly enough intrigue.

In a narrative sense is where Crimson Peak finds its struggles. The influences surely show themselves with hints and callbacks to Edgar Allen Poe’s “The Fall of the House of Usher” and Daphne du Maurier’s “Rebecca.” The spooky atmosphere brings a bit of a horror vibe but everything about the story feels unoriginal. Instead, it becomes about getting through the story in order to see most of the set and costume work being put together. In a sense, Del Toro succeeded as a director, in creating the mood and the larger construction of the film, but his co-written script left much to be desired.

The star of the show unquestionably proved to be Jessica Chastain. Portraying the secretive and weirdly overprotective Lucille, she certainly knew she could eat up in this role and took no prisoners in the process. Her evil and sadistic turn as Lucille allowed her to match up perfectly against the angelic and innocent Edith. Her over-the-top performance felt like such a needed respite from the mostly boring romance the film peddles with Edith and Thomas, as something sinister always sits right under the surface with her. Abrasive but ever-intriguing, Lucille proves to be a character with no real map for where she’ll land and Chastain got the chance to completely run with it.

Despite having a subpar story, especially one co-written by Guillermo Del Toro, Crimson Peak provides plenty for the eyes to feast on. The gothic mood and structures we enter perpetuate a dreadful mood, which works wonders for the intrigue built by the story. It shows the majestic work Del Toro can put together when having the available budget, which makes me glad this film exists.