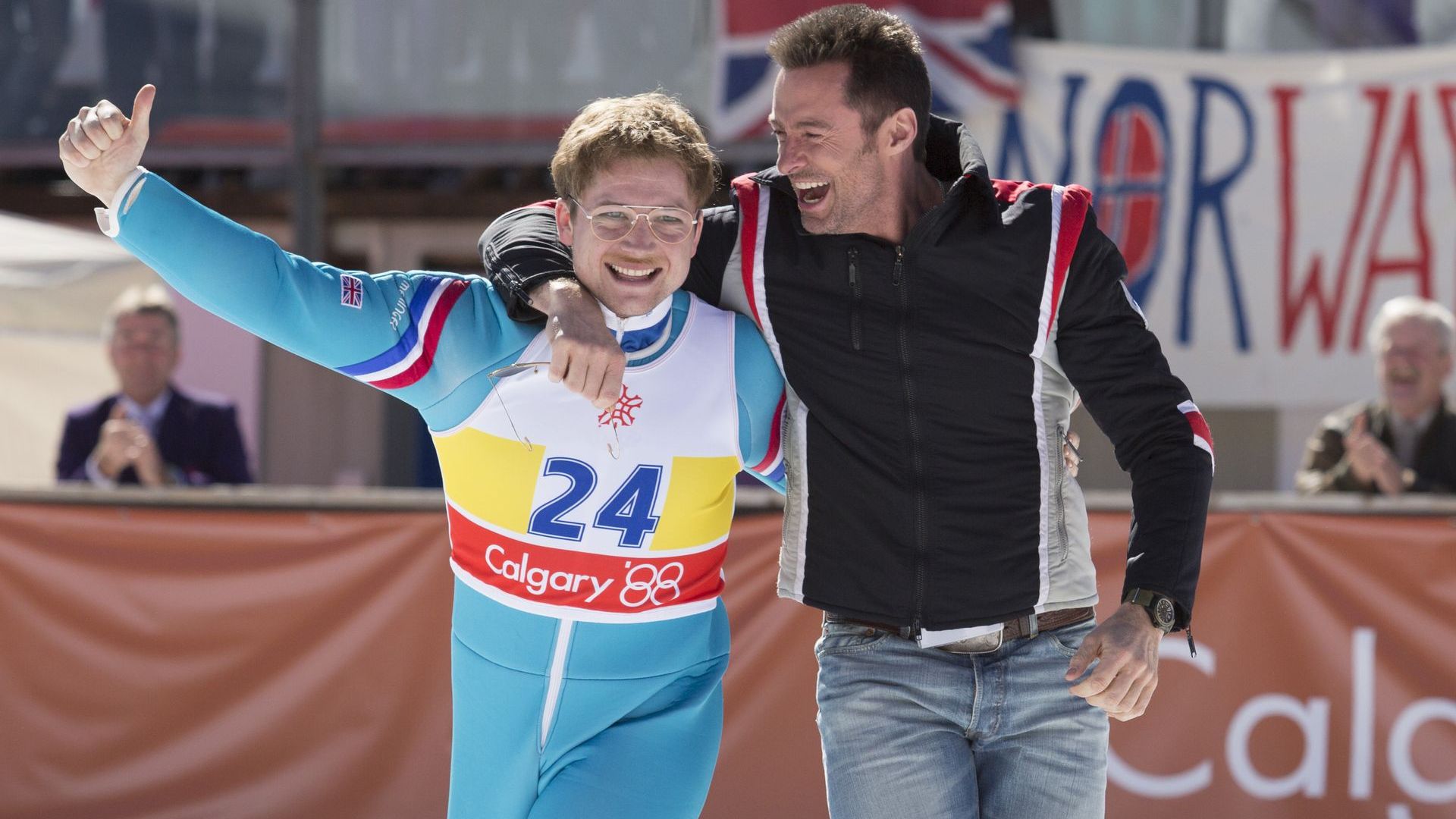 Sometimes just getting towards a destination serves as the reward. A sentiment central to the idea of perseverance and effort in Eddie the Eagle. The unlikeliest of underdogs but one with enough grit and determination to make anyone want to go out and live out their dreams despite any detractors in the way.

After overcoming physical difficulties as a child, Michael Edwards (Taron Egerton) dreams of participating in the Olympics at some point in his life. After trying and failing in different sports, he decides on ski jumping as his avenue. With the training and support of former jumper Bronson Peary (Hugh Jackman), they prepare to do what seems to be an impossible task.

Plucky underdog sports stories always carry such a resonance in the way they capture the hard work one can put into achieving success. Sure, some are gifted with abilities no amount of hard work can overcome, but Eddie does not need a gold medal to prove his worth. He just wants to make it to the dance and does not care what it will cost him to accomplish this physically. With a love for the Olympics and zeal as a child, his goal has been set for many years and he will not rest until he reaches it.

With the various sports the Olympic games have to offer, Eddie certainly picked one of the more dangerous and frightening ones to take on. Having some skill as a skier, he decided to try ski jumping, which comes with its risk of breaking your legs every time you try. The idea of starting up so high with such velocity to eventually land without breaking your legs scares the lights out of me, and the film does not shy away from this reality. It becomes a battle of mental fortitude versus what the body can handle. Every time Eddie made a jump, I found myself holding my breath hoping he would not get hurt. Considering this to be a feel-good movie, that certainly makes the case for this being incredibly effective filmmaking.

While an underdog story, Eddie the Eagle also tells the story of a burnt-out coach and his unrelenting mentee. Bronson Peary was a star in ski jumping back in his youth and reluctantly takes on Eddie as someone he could help mentor and train. They establish a mutually beneficial partnership where Eddie learns to not break his legs when jumping and Bronson inadvertently gains a level of passion in life he lost. Watching someone put their body and life on the line for something they love shows a level of passion that can warm even the most cynical and jaded perspectives. Eddie’s determination cannot be stopped and it creates a contagious feeling where it rubs off on Bronson. Their friendship and partnership create several touching moments as they share in moments of elation despite the gargantuan task set before them.

By following familiar beats in this sports story, successful films find a way to stand out by having a special factor to them. We know the rise and fall that will occur, but something needs to definitively engage the audience, and for Eddie the Eagle it undoubtedly becomes Taron Egerton as the star of this movie. Having a level of charisma and earnestness, Egerton goes all in with the character of Eddie. Taking on the full look, he captures the determination of this man and his no holds barred attitude to reaching his goal. From the utilization of his big smile, this shows some great casting for a character Egerton takes head-on. He pairs incredibly well with Hugh Jackman who consistently puts in great performances in these smaller roles. He certainly has a physicality to him but his sensitivity breaks out as Bronson as this character needs to balance his own struggles with not having Eddie break limbs in the pursuit of this goal. These two are a winning pair in the story and ensures an electricity remains to keep it engaging even if it follows familiar beats.

As the first collaboration before Rocketman, Dexter Fletcher proves he can direct Taron Egerton to glory with this movie. He knows how to craft inspiring moments and does so again with this feature as the build-up creates such a groundswell, which receives the proper cherry on top with the climax. Fletcher brings such energy and vibrancy to this story in the way he ramps up each scene with the importance it brings to the story. I certainly hope Egerton and Fletcher continue to collaborate because they know how to put together inspiring stories in such an uplifting way.

In a world where cynicism reigns, Eddie the Eagle serves as a wonderful palate cleanser as it tells the story of someone who has what appears to have an unachievable dream but refuses to let it hamper his effort. This film can provide moments of elation in the rainiest of days and shows that one does not need all of the prerequisites to follow their dreams. Eddie was never going to be standing at the podium with a gold medal around his neck, but he would not let any physical or mental deterrents impede him from at least trying. An uplifting experience anyone can enjoy.