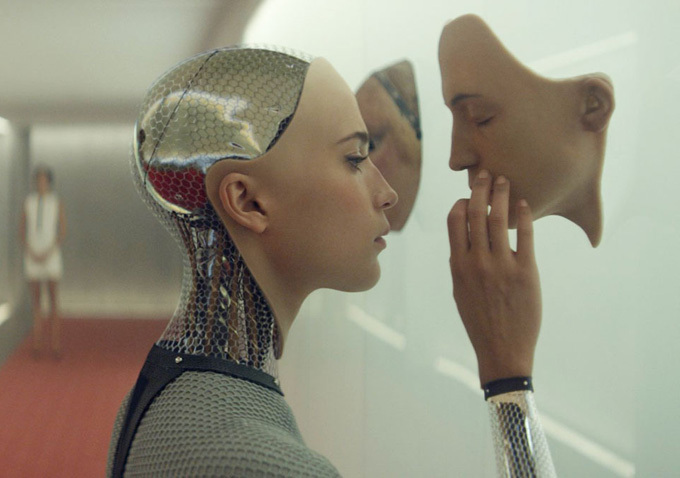 The qualities that comprise a human and subsequently differentiates them from all other sentient beings have been topics of discussion for centuries at this point. Heck, I even had a textbook in college called “Being Human,” which tried to examine this idea. The answer will never be definitive because we cannot speak to our creator, which makes the prospect of artificial intelligence so frightening. If we can step in as creators and have these products exhibit humanity in a way we can recognize, where does that leave us? This among many other well-crafted ideas fills the halls of the thrilling and pensive Ex Machina.

Winning the company lottery to spend a week at the CEO’s house, programmer Caleb Smith (Domhnall Gleeson) arrives at a secretive compound where he meets Nathan Bateman (Oscar Isaac). Caleb learns part of what he won included being part of a test to see whether or not a humanoid robot Nathan created could pass a test distinguishing itself as having humanlike ways of thinking and acting. This leads to a sequence of sessions where Caleb interacts with Ava (Alicia Vikander).

In nearly every science-fiction movie with artificial intelligence as the focus, the central warning seemingly always converges on it being a bad idea. It appears to be a wonderful advancement technologically but the risks could challenge where humans stand on the evolutionary ladder. Humans stand alone at the summit because of our intellect, but if a piece of machinery could materialize humanity’s defining feature, then we’re all in trouble. This generally constitutes the warning and the way Ex Machina navigates this idea comes together in such a tense but equally philosophical manner. It takes a brilliant mind to create humanoid robots, especially to the level of advancement Ava displays, but darker impulses and ideas still fester.

Caleb enters this residence with normal nervousness. He won a random drawing and gets to spend a week with the CEO. Nathan essentially runs the real-world equivalent of Google and most likely has billions of dollars at his disposal to craft artificial intelligence to advance the world of science. Essentially, Caleb is spending time with someone he admires and most of the world believes to be a genius from a very young age. As the film progresses, it further gives credence to the idea of not meeting your idols. Even with the terrific concept and execution through this film, at the core, the screenplay makes it run perfectly. Caleb arrives and expresses this nervousness and Nathan notices it and comments on the power dynamic on display. The CEO of one of the biggest global companies spending time with a young programmer. Nathan just wants this to be two guys hanging out, but it could never be this easy. This tension continually sits right under the surface with every conversation they have. Caleb sees this as a wonderful opportunity to be near the breakthrough of something historic and a small slip of phrase completely contextualizes Nathan and his line of thinking, which will carry through with every revelation made about the tech genius.

With the level of power at such a young age, we have seen the drawbacks of these tech geniuses being the most powerful individuals in the world. Plenty of money and thousands of sycophants just waiting for the opportunity to learn the secrets of success, Nathan represents how the ego of these individuals can balloon up to the point of concern. This appears in nearly every conversation held by the two men, but it becomes glaringly visible when Ava enters the fray narratively.

Underpinning Nathan’s God complex is his blatant misogyny, which runs rampant in the world of tech geniuses. Most of the ones with name recognition are men, and if you watch and read about them, they commonly have issues with women whether they admit it or not. Ex Machina certainly speaks on artificial intelligence, but it also shows the creation of these products as a form of controlling women. Nathan creates Ava to appear as a woman for a reason and as discovered in the film, she’s not the first of his. None of Nathan’s creations get made in the figures of men because he wants to control what he cannot in human women. With Ava he creates the ideal specimen, giving her a figure he enjoys and a conventionally beautiful face. Ava serves as a creation and even if the film does not explicitly state it, I feel safe in saying Nathan does not have strong relationships with women. He keeps her in a room and controls whom she can interact with and if she’ll ever see the light of day. As much as this advancement serves as a technological breakthrough, it also provides Nathan with some wish fulfillment.

The technical elements of this film astound me to no end in the way it perfectly contributes to this tense feeling ever-present in the narrative. The house has a level of uncomfortable cleanliness, to which Nathan agrees as he calls it a research facility. Nothing about this place can be described as hospitable and the production design nails the aesthetic of each room. Caleb feels less like a guest and more of a patient in the overall scheme at play. The visual effects, of course, also stand out in a strident and majestic manner. The way they transform Alicia Vikander into a humanoid robot happens with precision and incredible quality. It demonstrates how a human could be put together much like a puzzle. This brilliance certainly assists in helping Ava feel just as human as either Caleb and Nathan.

Not enough can be said about the acting showcase happening here with the magnificent trio of Alicia Vikander, Oscar Isaac, and Domhnall Gleeson. Each portraying three distinct characters, the showstopper undoubtedly proves to be Vikander in the way she brings such humanity to this robot. She walks the fine line reminding you she’s only a robot but displaying the human elements necessary for her to pass the test. I even found myself forgetting she’s meant to display human-like qualities in the way she easily weaves through the emotions and machinations necessary in displaying Ava. Gleeson serves as the entry point into this strange situation and does well reacting to it all but Oscar Isaac really captures the scumbag nature of Nathan. Certainly not someone you want to spend too much time with, Issac displays what would make him so appealing for others to interact with but also a complete sociopath when spending a considerable amount of time. Oh, and he also has a killer dance sequence with Sonoya Mizuno, which may be the greatest thing ever filmed.

Having this be Alex Garland’s directorial debut genuinely makes me angry because of the intellectual brilliance he displays. Known for being a writer of several films before taking on Ex Machina, he uses ideas and concepts from real technology and literature but crafts this Frankenstein-like film with such efficiency and filled with thought. Every conversation held between these characters felt like a goldmine of ideas regarding human consciousness. Each session with Ava latches on to different notions and emotions we may take for granted but undeniably remains fundamental to human existence. This pairs well with the neverending sense of unease Garland builds where no one can fully trust the other in this circumstance. Caleb, Ava, and Nathan all keep something under the vest and never share complete honesty with the others. You just keep waiting for something calamitous to happen and the way this film carries out its message not only perfectly puts a bow on everything narratively, but also with themes staring right at you. Garland impresses with this and genuinely becomes someone I will follow to any project to see what else he can conjure.

Undeniably potent in every facet, Ex Machina works on every single level and comes forward with the vision of its writer/director. It has a larger conversation about grand topics but also takes an important and harsh look at the men who typically want to craft something like artificial intelligence. The breakdown works wonders and it proves to be a story that only gets more enriching upon repeat viewings.