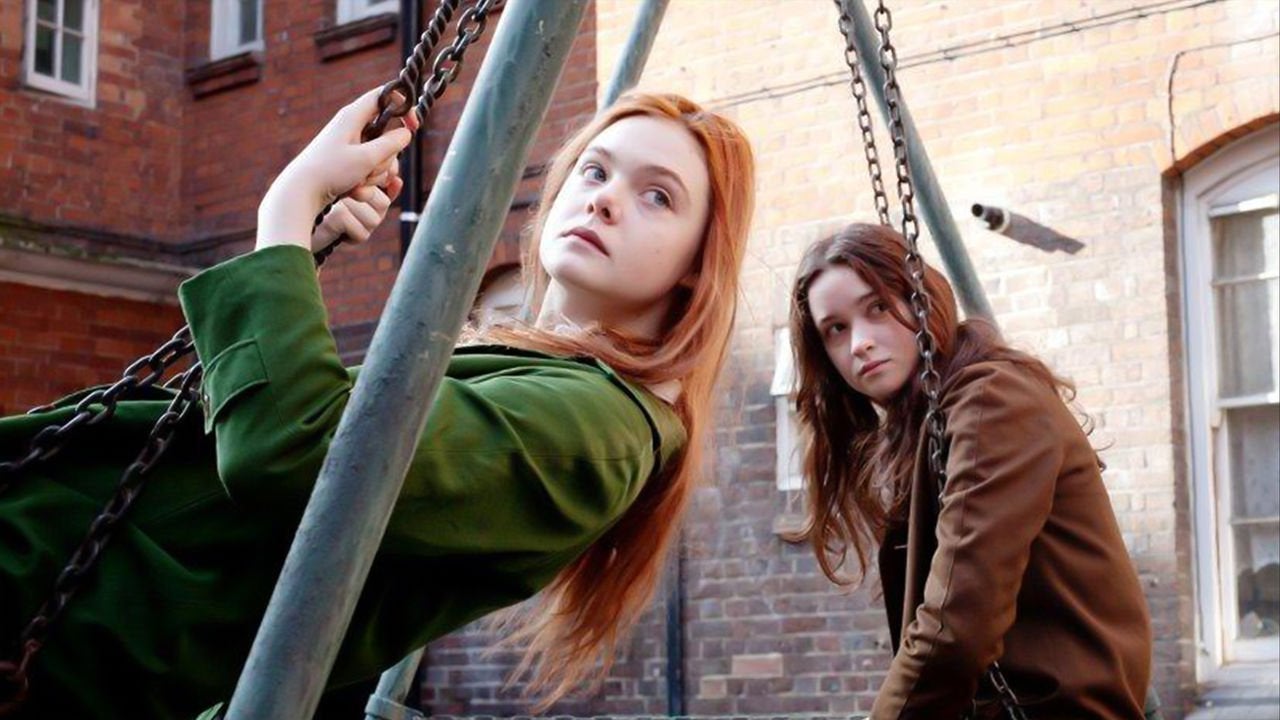 Priorities in youth typically come with the befuddlement of parents who cannot comprehend how their children act irrespective of the advice given. No cookie-cutter experience can form two people to the same result and the differences found between the two girls in this feature come as a resort of where they come from and their environment. Touching in moments but beautiful in its direction, Ginger & Rosa depicts a tumultuous time during a frightful moment in history.

During the height of nuclear fear in England, best friends since birth, Ginger (Elle Fanning) and Rosa (Alice Englert) enter their 17th year on Earth with different ambitions. Mostly inseparable, their relationship begins to have cracks form as their relationships with others and the outside world impact their outlook for the future.

The divide happening between the two titular characters comes naturally with any friends growing up. When living as a small child, the world appears to be simple with the basic needs of food and shelter being the only prerequisite for happiness. Growing closer into adulthood, interests and other hobbies begin to take form and it may not always align even with the closest of friends. Ginger and Rosa are no different as the former takes her academics far more seriously while the latter cares more for her religious connections along with the affections of boys. Despite the difference, they remain strongly intertwined in each other’s lives until a specific event might change the trajectory of their relationship in the long run.

Establishing the relationship between these two remains integral for the audience to build a connection with them, and this film succeeds in spades in doing so. The chemistry held between Elle Fanning and Alice Englert established the friendship and it comes as effortless as anyone would hope. The acting pair establish two characters who hold a strong bond while very much being their own individuals. A history exists between them seeing as they essentially grew up with each other and Fanning and Englert truly sell this well. They create the foundation, which only makes the events of the feature all the more heartbreaking in its impact.

Most of the focus lies with Ginger and not only the relationship she has with Rosa but also her mother, father, godfathers, and the rest of the world. As a character, she embodies the struggle of many youngsters when jumping onto a cause. Ceaseless passion with little to no power to change things. Her passion lies in advocating for peace amidst a world ready to detonate from a nuclear bomb. Fanning dazzles in this role and carries the weight of the world on her shoulders without the means for substantive change. It has the feeling of the gun control advocates in high school where they do not wield the power to vote but feel the impact of an uncertain future because of the actions of irrational adults. This gets evoked so well through Ginger in a way where it becomes painstakingly obvious she needs someone to just listen to her.

Ginger’s relationship with her mother carries plenty of weight, and portrayed tremendously well by Christina Hendricks, Nat knows what it’s like to not have life go according to plan and does not want the same to occur for her daughter. Stringent at times and laced with regret, the sadness of the eyes of Hendricks through this performance does so well and reminds the world why she’s such a talented actor. Again, it only makes the revelation towards the end of the film that much more painful to take in considering the closeness she knows her daughter has for Rosa. Her decisions come with a level of sympathy and the pain she needs to manage for what occurs throughout the narrative.

Anytime Sally Potter decides to take on a project, my ears perk up in anticipation, as she has such a slick way of producing her projects. As a filmmaker, she is unafraid to take on challenging material and she has not disappointed in the presentation of it. With the subject material at hand, Ginger & Rosa serves as a challenging story to tell, and the way Potter navigates the melodramatic aspects show a director at the top of her game. She lets the emotional stakes be known before shattering them right in front of us as audience members. Strong work on her end.

Melancholic at times but with enough youthful energy to power a city, Ginger & Rosa tells an emotionally fulfilling story filled with resonant moments. Aided by a tremendously sound cast and a fierce director, it tells this story in the best way it could have and grounds the narrative of these two girls with enough care and deftness to give the material respect.