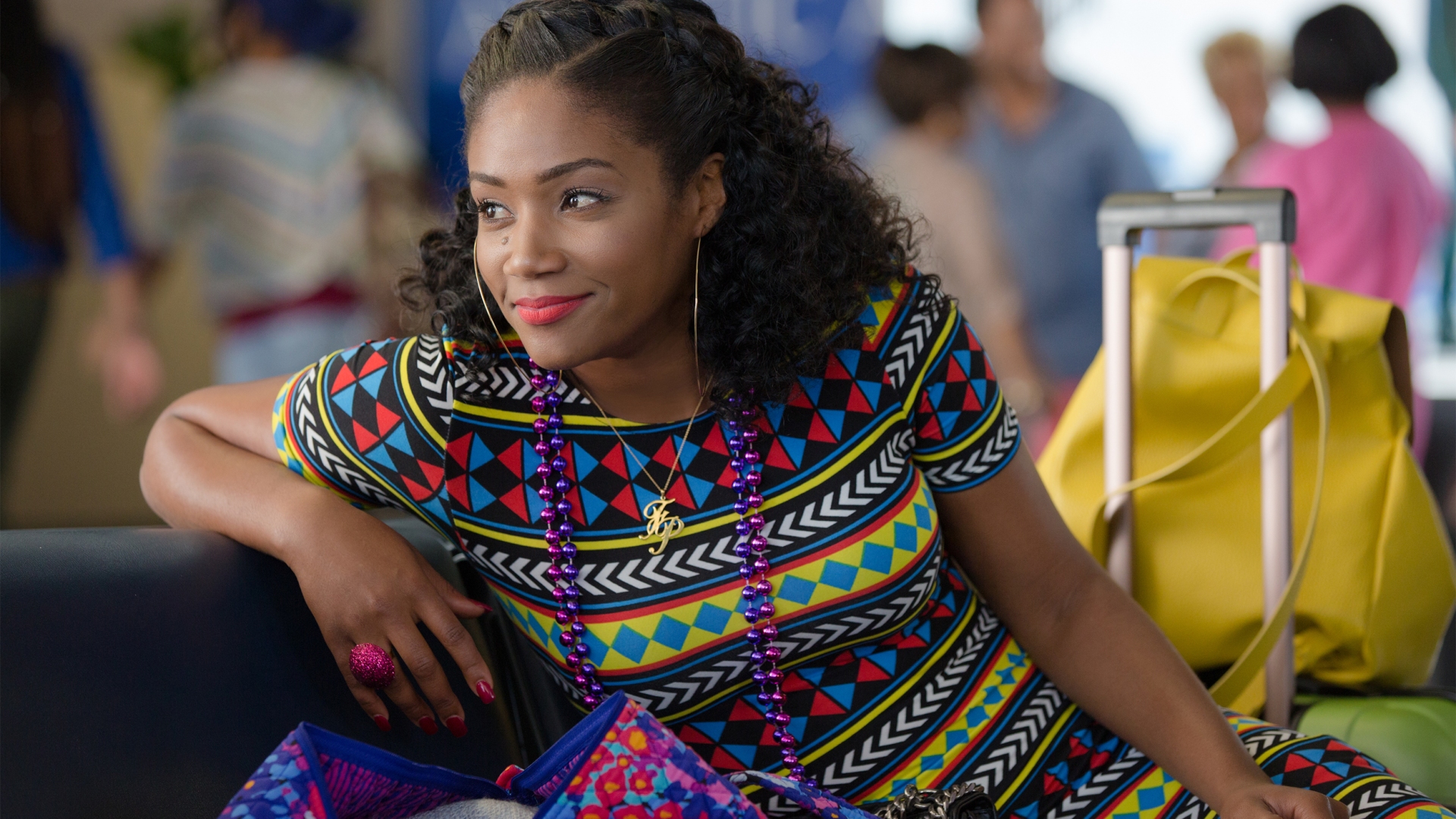 Most of the time saddled with scraps, Black women have received the bare minimum in representation in film and when it arrives, it usually comes centered on their pain. At times it’s just nice to show them having unadulterated fun, which Girls Trip delivers in such high order. Riding the coattails of its four fantastic leads, this film hits all of the right buttons in balancing its emotional message and raunchiness.

Together since college, the “Flossy Posse” consists of lifestyle guru, Ryan (Regina Hall), gossip columnist, Sasha (Queen Latifah), nurse and mother Lisa (Jada Pinkett Smith), and wild card, Dina (Tiffany Haddish). Selected as the keynote speaker for the Essence Music Festival in New Orleans, Ryan invites her friends, who she has not seen in a considerable amount of time, and the four get involved in their shenanigans with Ryan on the cusp of a major business deal.

The fact that Girls Trip came as such fresh air really says plenty about the film industry and the way it views stories centered on Black women. This style of storytelling has existed for other demographics but the way it comes together for this feature combines the bundle of fun these women are allowed to have and an incredible amount of beautiful energy.

Each of these women enters the story with their own issues plaguing them except for Ryan initially. She seemingly has it all as has become her brand. Sasha struggles to pay her bills, Lisa cannot get any rest in being a mother, and Dina cannot stay in a job for too long. Having them come together activates something each of them has been missing since they last saw each other and the collision of their personalities brings plenty of the comedy this film provided in droves. The emotional core of the film lies with Ryan and Sasha who evidently have some bitter history between them that seemingly does not exist with Dina and Lisa. However, the comedic high points are carried by Tiffany Haddish.

Serving as her truly sensational breakout role, the things Haddish does with this character is absolutely spectacular. Serving as the wild card of the group ready to cause chaos at a moment’s notice, she also brings the fun with her eccentricities. Dina most likely has the smallest security net amongst the four women but she certainly does not act like it and her act becomes fascinating to experience. If anything, Dina pushes the plot along at times and becomes the catalyst for many of the ridiculous circumstances these women find themselves in.

However, the core of this story remains the bond between these women and no matter how much time has passed since their last physical meeting, their bond can never be broken. It’s certainly my hope everyone has at least one person who serves this function for them, seeing as life gets busier the older we get until retirement where we have nothing to do and not much life to live. No matter what issues these four face with the world and each other, the utter beauty of them coming together like in the dance-off within the club and in small conversations really illicit a beautiful love emanating between them. Their bond creates many emotional moments, especially as we get towards the end but the raunchiness remains.

The poster of this movie features the four women staring up at a man’s genitals, which is quite the reversal from the objectification usually imposed on women, but it outlines what kind of story we need to prepare ourselves for. This story features women in their midlife eras, specifically a time where women’s sexuality seemingly diminishes if you look at popular culture. Girls Trip embraces the reality of these women still being sexual beings once they pass the age of 40. Daring, I know, but again it feels fresh because of the lack of attention generally given to Black women and having positive experiences on-screen. Much of the sexual exploration comes with the character of Lisa as she had not been sexually active with another person in nearly two years and it becomes the mission of the other women to help their friend get laid. None of it feels exploitative and that comes down to the script and the richness of these characters beyond the simple archetypes typically found in a film of this sort

Several moments will cause you to laugh out loud and rejoice in the beauty of friendship found within Girls Trip. At its core, it features a beautiful reconnection and recalibration of four women as they are reminded of the power of friendship despite all of the nonsense around them. All four of these actors have their moment to shine and they all excel in going exactly for what this story needs. This film truly has it all and remains an easily rewatchable story, which speaks very well on the quality of the comedy on display.