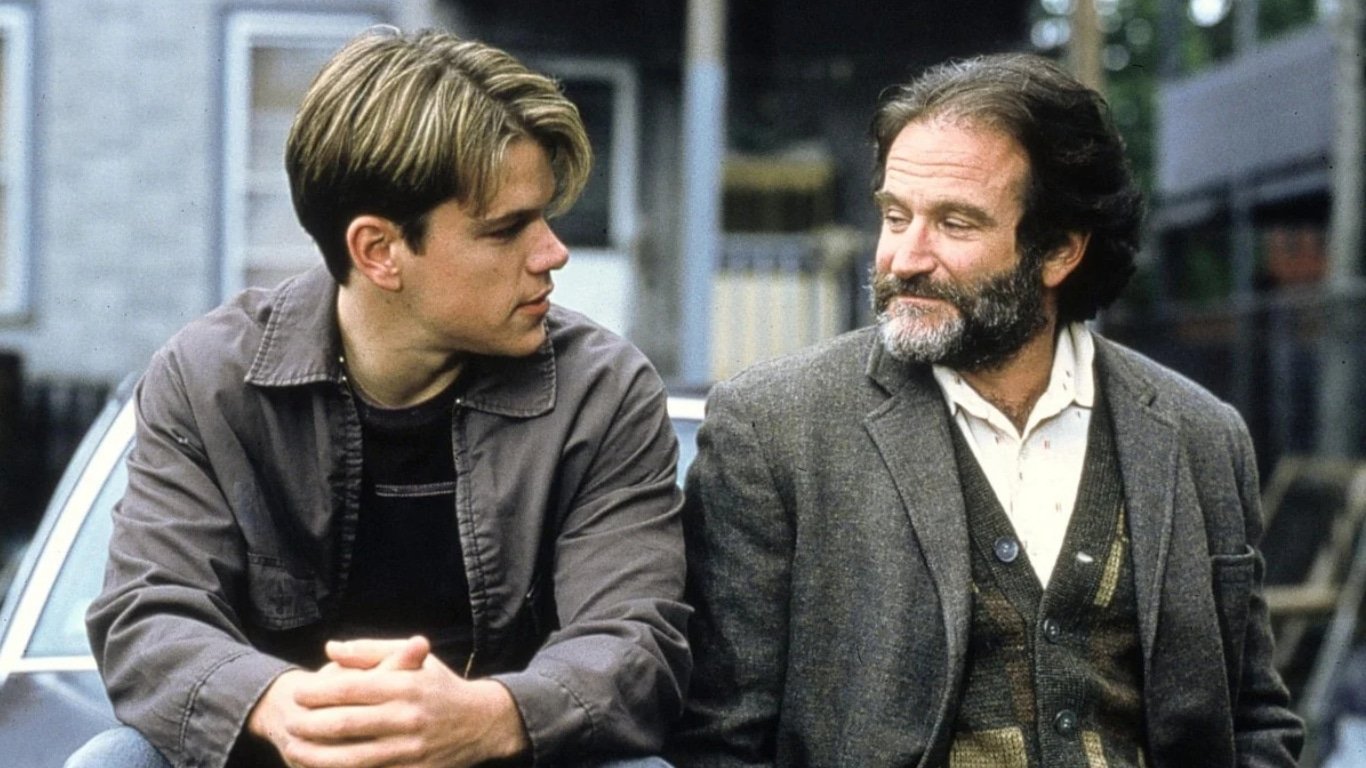 Natural talent and available resources lead to success for a given individual. Having one without the other could hinder the path to success or even stop it outright. It goes along with the belief that the next great contributor to the world could be in a location where their talent does not receive the proper nurturing and we would never know their potential. Good Will Hunting provides this particular lucky situation all while attacking it on multiple fronts.

An undisputed genius working as a janitor, Will Hunting (Matt Damon) solves a near-impossible theorem, which gets the attention of MIT professor Gerald Lambeau (Stellan Skarsgård). The professor takes Will under his wing after another police incident on the condition the young man met with a counselor, Dr. Sean Maguire (Robin Williams). As the therapist and the young man meet on a regular basis, they begin to break down why he acts the way he does and how his environment has played an integral role.

It would be hard to argue that any other mainstream movie has stressed the importance of good therapy than Good Will Hunting. Issues blocking individuals at a mental level still to this day carry a stigma where a strong section of the population believes it can just simply be worked through without the aid of professional help. This feature sets to do away with it seeing as Will Hunting pretty much has everything an individual could want in order to find success. One, he looks like young Matt Damon and contains a genius-level of collecting knowledge within his brain. The man could read a book and nearly recite it back to you. Despite having this ability, he seemingly wants to run in circles for the rest of his life and continually take away from a potentially successful future in any venture of his choosing. Sean helps through this process but the more intriguing aspect of this feature comes in the class divide existent in the city of Boston amongst the supposed intellectuals and rugged townies.

Serving as the home of stalwart institutions like Harvard and MIT, Boston has acquired the reputation of being a place where intellect can thrive while additionally harboring the personalities of neighborhoods such as Southie. Having never been to Boston, I cannot say for sure whether this film fairly sets up this divide but seeing as the screenwriting duo spent their youth there I’m willing to give them the benefit of the doubt. This divide becomes incredibly clear from the first theorem posted on the board and the way it gets mysteriously solved. Professor Lambeau assumes the solver lies within his students but could not fathom the janitor, Will, could have done it until actually seeing it occur. No, not the individual paying 100s of thousands of dollars for an education, just a janitor. This plays out on more than one occasion including when Will first meets Skyler (Minnie Driver) at a local Harvard bar. A scene playing out to incredible catharsis, the narrative almost paints higher education as a waste of money when Will learned everything they did and more by simply using a public library.

Now, the way the scene played out may have been a bit simplistic in the way educational resources get distributed but it all goes to this larger point. Intelligence can thrive in many contexts and having a shiny degree does not elevate one person over another. I can only imagine this remains a source of tension between the college students of these prestigious institutions and the locals of the area. While the film takes this point, it also acknowledges the power resources have to elevate the natural intelligence people have. It dictates why Professor  Lambeau persists through Will’s constant immaturity with counselors he brings the young man to. Will has a distinct genius and if steered the right way could easily make a discernible difference in the state of the world.

The biggest selling point this feature has always offered is the screenplay, which won an Academy Award and essentially launched both Matt Damon and Ben Affleck as two individuals with the power to be movie stars but also strong storytellers. At times when watching the projects after this feature you have to remind yourself of the brilliance they put together in this film because nothing else really measures up. At times the screenplay gets a bit too cute with what Will Hunting can get away with using the power of his knowledge but everything occurring with Will and Sean pretty much resembles perfection. From their introduction and the counseling methods of the counselor, the battle of the minds and hearts taken on in this feature reaches moments of anger and complete adoration. In the end, like many things in therapy it takes the smallest recalibrations or assurances to truly make the breakthrough.

Truly carrying this film to greatness is the spellbindingly moving work by Robin Williams. When I think of his contribution as an actor, this particular performance always springs to mind. The character of Sean has a rugged but intellectual demeanor too, which makes him a worthy therapist to break through the exterior of Will. From the same neighborhood and all, he plays no games when trying to figure out what works best for the young genius. Williams brings an element of grace to this role and absolutely nails all of the emotionally powerful moments. As a character, Sean has his own flaws, but he allows it to be all in the open when conversing with Will and because of these tactics and his knowledge of how to peruse through nonsense, it truly makes a difference. Williams remains the heart and soul of this movie and it becomes difficult not to get emotional seeing this spectacular work with him leaving us too soon.

A widely adored feature for good reason, Good Will Hunting pushes its characters to go beyond their comfort level and with it the narrative continually builds intrigue to get right at what each of them needs. Hurdles arise and sometimes it just takes a conversation with someone who truly cares to make a discernible difference in the life of a young adult. A good one to share with the family and still remains the best work of most of the cast, the screenwriters, and the director.