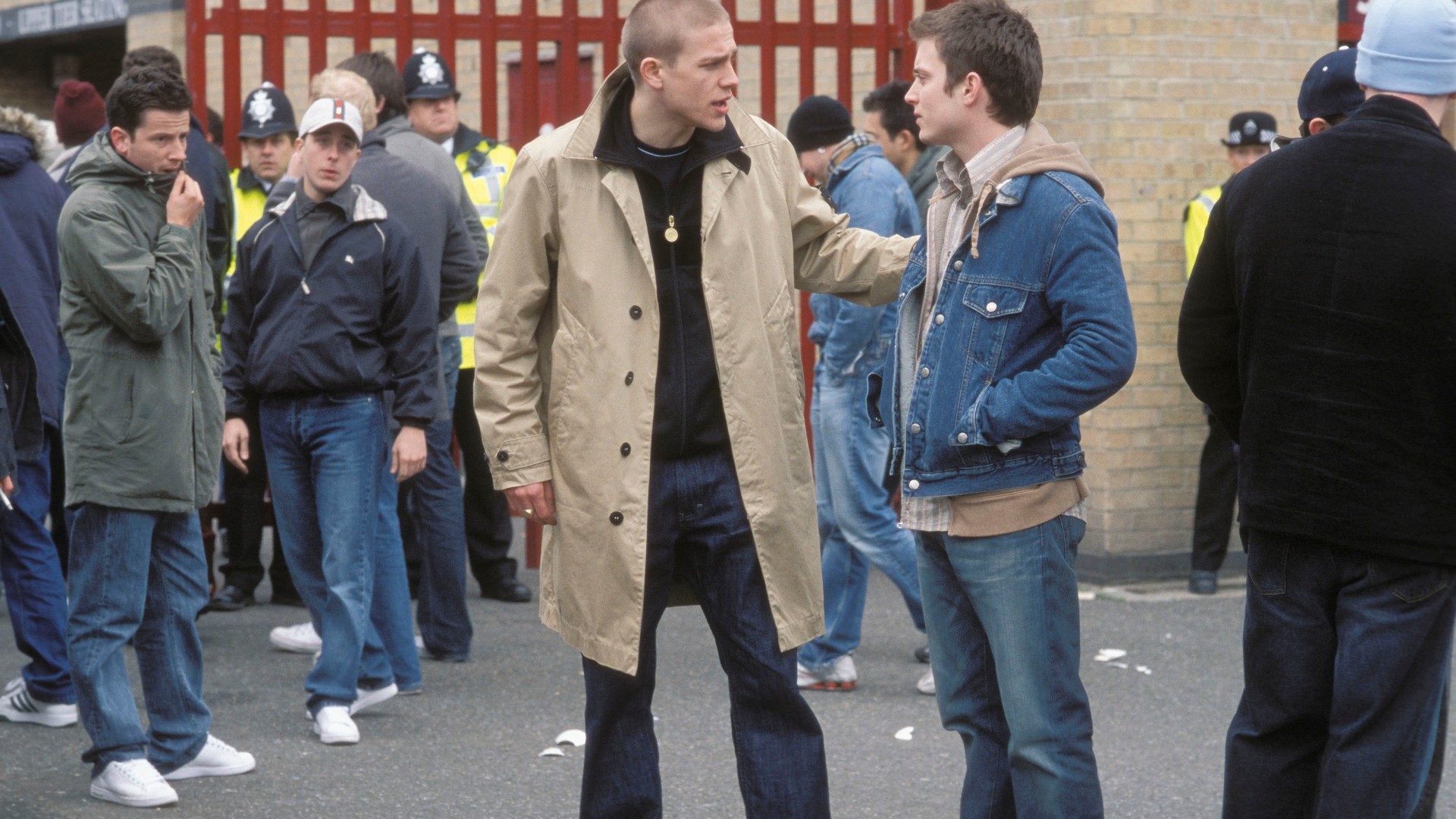 Hooliganism ran rampant from fans of English football clubs with its height not too long ago where it became more than just rivalries on the pitch. It made going to games dangerous and not the family affairs they were always meant to be. While most of this has been cleaned up in recent years, Green Street Hooligans transport us back to a time where this domainted the streets right outside the stadiums and this violence-soaked drama offers plenty to think about and enjoy.

Visiting his sister in London after an expulsion at Harvard, Matt (Elijah Wood) receives the opportunity to attend a West Ham football game with his brother-in-law’s younger brother, Pete (Charlie Hunnam). As he attends the matches, he notices how things get incredibly violent and ends up growing more confident in himself as he soon parkakes in this type of behavior.

Rampant hooliganism’s impact cannot be taken lightly seeing as it shifted the perception of an entire sport with billions within England. The national sport had this stain, which the clean-up was very necessary for it to grow and be something families could attend. The fights between these supporter’s groups got so terribly violent and not much of it had to do with football. Merely a group of gangs who happen to support different clubs taking the opportunity to assert their dominance around others. The raging toxic masculinity does not hide from the surface here, but it’s quite hilarious the focus of this film falls on West Ham fans. The same supporters who sing about blowing bubbles and do so at every home match. Almost a complete contradiction of the bravado they attempt to display when fighting other groups.

As much as the story hinges on the fights, this narrative fixates on its protagonist’s journey of toughening up and advocating for himself. His expulsion came from a place where he saw the easy way out and figured putting up a fight would not be beneficial to contest and actually do what was right. While he gets the courage to throw punches while in London when spending time with Pete, the film does not hinge on violence being the only answer. Sure, it gets displayed in spades here but the narrative takes a distinct stance on the impact this has on the people continuing to hash things out with their fists. A tragedy in its own way interspersed with what attracts these men to settle their disputes.

Additionally, this film also looks at the power of forming a community with others. Matt found himself with no one to attach himself to and this film takes him on the journey of actually finding a connection. Distinctly different from Pete in almost every way manageable, the friendship and respect they gain from each other certainly has its admirable qualities and allows this film to thrive. Matt never even had a real interest in football as a sport, but it brought him together with others to enjoy a sense of belonging with others. This ultimately stands as one of the greatest benefits of sports. Building a sense of unity with a common goal of rooting for your team’s success. A beautiful thing to watch and something highlighted very well.

Within her filmography, Lexi Alexander has hit and missed on several occasions. From the putrid Lifted and her subpar approach to the Punisher character, this feature stands out as her best by a country mile. In this feature, she ensures in creating a rugged atmosphere for all these characters to live in and the fight scenes truly take the cake. With no sense of elegance, these sequences show the damage done when these supporter’s groups get together and have an all-out brawl. Each punch gets felt and the repercussions for it all along with the thrills demonstrate why these men enjoy it. Almost like why it became so popular in Fight Club. A strange thrill arises from these fights and the camera has no issue in displaying this very sentiment.

A grungy and overall fun experience, Green Street Hooligans demonstrates the true dangers existent when these supporter’s groups cause an obscene amount of violence. It shows the dangers it caused for everyone around them but also the thrill it brought these men to pummel others just for the sake of it. The drama reaches sky-high trouble when certain reveals show just how ingrained this type of violence runs rampant in this London community and it all comes together to make a strong feature film. Certainly Lexi Alexander’s very best and something that would be interesting to revisit within the current landscape of football supporters.