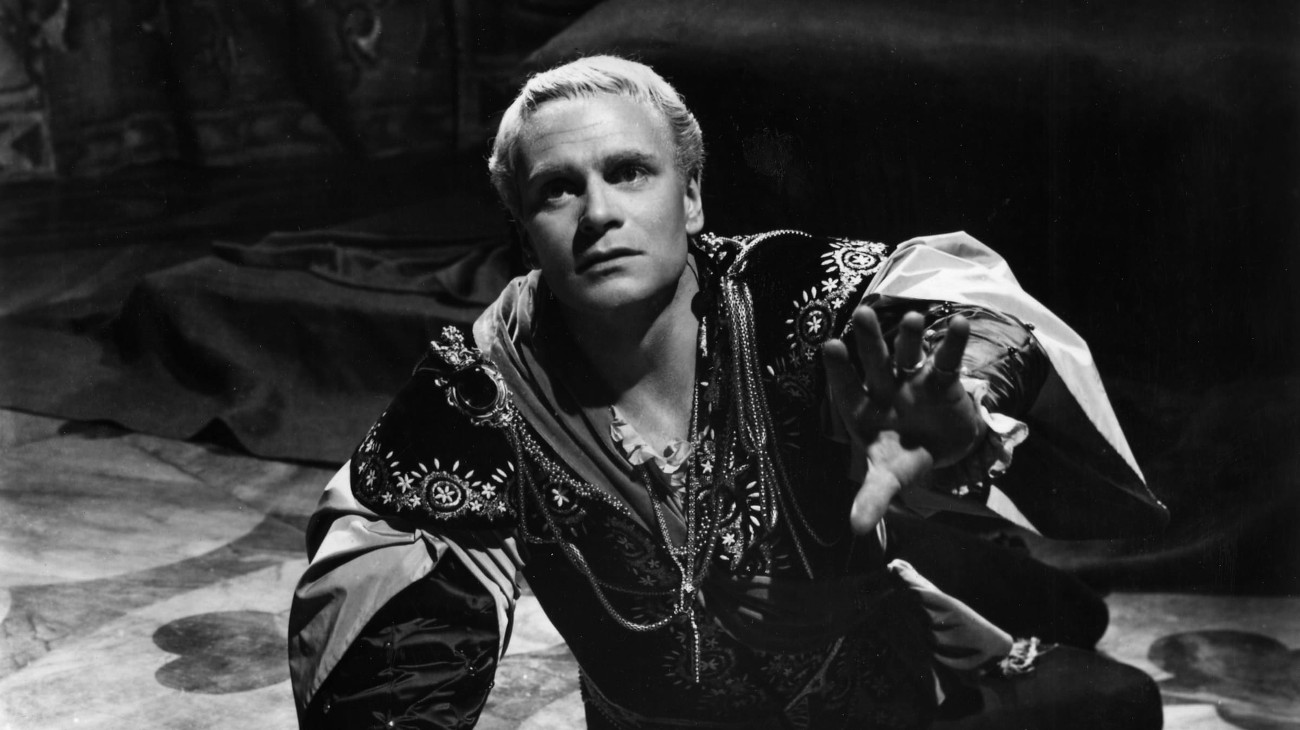 As with any adaptation from any medium to live-action film, the importance of the little details to differentiate the experience makes it worthwhile. Without something to make it distinct, one would be better off watching the original productions from which they came. Hamlet presents itself as a more refined iteration of the famous Shakespearean tale and on its technical merits, it shines in creating an engaging atmosphere, but the dialogue on display just gave me headaches.

Following the death of his father, Hamlet (Laurence Olivier) receives a message from an apparition of the recently deceased paternal figure implying he was killed by his very own brother and Hamlet’s uncle Claudius (Basil Sydney). With Claudius recently marrying Hamlet’s mother and ascending to the throne, Hamlet hatches ways to reveal the truth.

In reviewing this production, it comes a time to reconcile with how much I just cannot vibe with Shakespearean dialogue in a feature film, especially if it goes on for 2.5 hours. I certainly try to make these reviews as analytic in assessing the film, but in the end, it’s just my opinion and while this feature can be enjoyed by those who love Shakespeare, it makes for a challenging viewing experience. All that to say, this film became an agonizing experience not through the fault of the movie but rather any attempt to use Shakespeare’s dialogue would take me out of even the most perfectly well-made film. This type of writing just does not vibe with me and it became such a chore to try and distinguish everything being said by these characters. Again, not a negative reflection on the filmmaking at hand.

Laurence Olivier makes some intriguing decisions with this adaptation, which includes removing two integral characters and cutting out major parts but he finds a good balance here. The movie already goes for quite the long runtime and any more would have just done me in. He utilizes this sense of proficiency in his storytelling in getting right into the meat of what occurs and really digs down into how it makes the titular character feel. Take the perspective right at the beginning where jubilation reigns in the kingdom, but yet an annoyed Hamlet sits in with a sense of anger. You certainly could not blame him seeing as his mother moved on from his father a month after his death, and then to the father’s brother nevertheless. In ancient times, this served as common practice, but definitely not in the period Shakespeare set the story.

The rest of the narrative plays out in a way for Hamlet to break down Claudius and admit the wrongdoings that occurred with his father. Things certainly get tense, overdramatic, and downright testy at times but the emotions certainly run high in this circumstance and with good reason. It makes for an entertaining battle of the wills as someone will break decorum at some point and eventually show their hand. When the truth comes out, a reckoning will come and questions will need to be answered. Hamlet hopes to get to this point before advisors of Claudius try to get rid of the young man.

By far, the greatest element of the feature comes in production design. Never once feeling stagey, each distinct look combined with the cinematography creates this almost foggy appearance in each room emanating this mysterious feeling aiding the narrative flow. With there being a foggy night that brings the presence of the apparition, this film can be classified as a ghost story and the look of everything surrounding the characters continues on with this particular vibe. Not many scenes provide a sense of comfort in how they look and the way the characters act, which makes sense because this highly strenuous time in the lives of these individuals has everyone else living in unease. It thus makes sense their environment reflects this very sentiment, which the production design accomplishes and then some.

As a project, starring, directed, and produced by Laurence Olivier, Hamlet certainly comes through as a passion project for the acting legend. He portrays the titular character and does a tremendous job in capturing the anguish of this man as he learns devastating news so close to the incident in question. Imagine hearing the news that your uncle lays the responsibility of killing your own father, delivered nonetheless by an apparition of your father? Wild to say the least, and Olivier plays up every aspect of this with his acting and the directorial decisions he makes with the camera.

In the end, by using the exact dialogue captured from the play, Hamlet never had a chance to be an enjoyable experience for me. I simply cannot do the roundabout nature of this dialogue, which left me just trying to enjoy the technical elements of the feature, which definitely delivered in its attempt to play into this ghost story. Olivier shines but in something completely inaccessible to me.