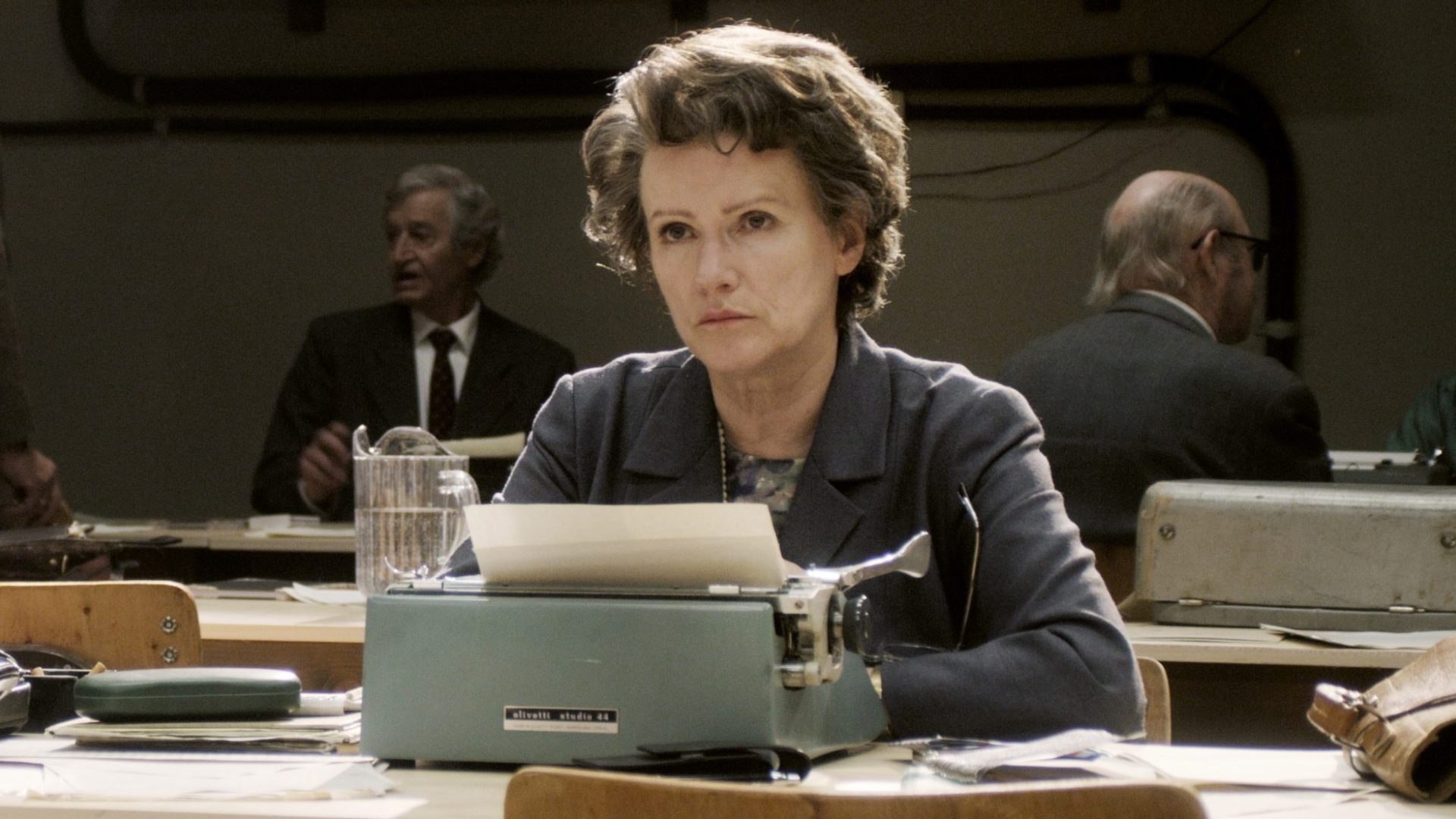 Certain viewpoints due to no better alternative stand as the common way of thinking on specific topics. Such as everyone sitting in agreement that what Nazis did during the Holocaust was wrong. Anyone trying to argue against is wrong and rightfully should be deemed a lunatic. However, Hannah Arendt proposes the idea of open dialogue within the margins of specific cases within a larger discussion without ballooning it all up to a wider ideal. Something she faces much vitriol but nonetheless a subject matter recurring even today.

Famous political theorist, Hannah Arendt (Barbara Sukowa) learns of the capturing of a former Nazi leader found in Argentina. With the man going on trial, she offers to cover it for The New Yorker and heads to Jerusalem. As she hears the trial, she comes to the conclusion of one man not being responsible for the work of an entire movement. An unpopular opinion putting her at odds not only with her friends but also the rest of the world.

The topic argued in this film certainly provides intrigue because of the controversy around it but the larger discussion this narrative wants to take on becomes much more fascinating and fruitful to talk about. Hannah’s opinion on the trial never really mattered in the grand scheme of things because the common belief amongst people is that Nazis were terrible and anyone who worked with and/or for them deserves the harshest of penalties for the damage the movement caused to millions of people. Sent to cover it, Hannah found it in her conscience that she could not simply go with the crowd but saw the man on trial for what he was, which is someone following orders and lacking the cognitive ability to be responsible for all of the actions committed by the entire Nazi regime.

While I believe some hills are not worth dying on, this does bring up an interesting larger discussion about the importance of nuance when discussing highly emotional topics. The Holocaust impacted millions and still has its ramifications today, which makes any sort of opinion against fully punishing those even tangentially involved with what occurred extremely controversial. Hannah certainly feels the consequences for her opinion but the film tries to show the genuine human impact it has on the titular character based on a piece of writing. Now, I am certainly not siding with Hannah in her opinion but in certain ways, her lack of opportunities she receives throughout the film to make her case does ring true to how things operate today.

It does not take long for articles from publications to receive plenty of backlash for stating outlandish opinions and while I admit many of them want to get hate-clicks, some are trying to have an engaging conversation of some sort. The openness to clear the air and add some nuance to conversations people wished were simply black and white does not really exist with polarized opinions putting people into different corners. When entrenched in these beliefs, it makes any sort of open dialogue impossible without shouting and vitriol spilling within in-person conversations or over the internet.

The film certainly feels the pain Hannah does in going through with her determination and does take a sympathetic look at how she could not move past it. Even with my disagreement with the subject of the film, the narrative ensures to paint this person as a human being. At times this gets forgotten when we look at people we disagree with in these serious topics, but Hannah has friends she lost because of her sticking to her convictions, and the shunning she receives leaves a definite impact on her well-being. In this regard, the film succeeds, as it tries to get to the heart of this woman’s argument.

An utterly intriguing picture anchored by a good performance from Barbara Sukowa as the titular character and some decent direction by Margarethe von Trotta. She certainly came into this story with plenty of ideas she wanted to share and has no problem in putting them out there for people to have disagreements. At the very least, watching this film will provide the opportunity for others to think about what hills they would die on if it meant losing all of their friends. But also in all seriousness, what topics would cause this much derision when stating an opinion outside of the perceived right answer collectively agreed upon.