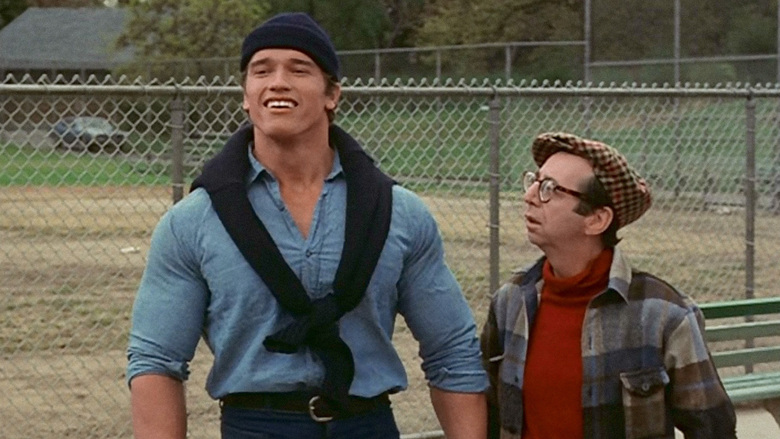 If anyone could make the case for being a real-life iteration of Hercules, it would be Arnold Schwarzenegger. In his prime, he had a body that appeared almost impossible to attain, which made his first real foray into acting portraying the famous demi-god quite the apt bit of casting. This all culminates in this film that while it has its fun and cheesy moments, the narrative simply feels far too lackluster and fairly amateurish as a final product.

At Olympus, Hercules (Arnold Schwarzenegger) grows bored of hanging out with other gods and asks his father, Zeus (Ernest Graves) about the possibility of going down to Earth for some adventures. After showing initial annoyance, Zeus finally sends him down, which gives the demi-god the opportunity to act with humans and get himself into funny and ridiculous situations.

Stories utilizing a fish-out-of-water approach through its storytelling rely on the clashing of cultures to drive most of the comedy. The further apart the differences are, the more humorous the meeting becomes. The difference of interacting with people up at Olympus as opposed to the Earth certainly creates quite the gulf and Hercules in New York uses it to some success but its efforts get quite stale very quickly. Coming down to Earth with plenty of arrogance because of his status, Hercules has plenty of awkward confrontations. After a while, it becomes the only aspect of comedy the film wishes to employ, which prohibits it from having any sort of staying power.

With the setting being both Olympus and New York, they provide different areas for Hercules to manage. In his home, he sits as one of the equals amongst other gods on his best days, but just appears as an immature child to most of them. Partly, it’s why his father sends him down to Earth. It becomes about teaching the young demi-god a lesson and having this adventure in order to get it out of his system. An intriguing idea in order for Hercules to eventually mature and it ultimately becomes the learning curve for this character.

While on Earth, he gets mixed up in wrestling because of his incredible strength, and in these moments it just shows the vastness of Arnold as a human being. The way he stacks up to others with his massive figure would scare the lights out of anyone if they found themselves on the other side of the ring. Something the filmmakers are very well aware of and it has the titular character interacting with some dodgy figures as they attempt to make some money off of the demi-god. Arnold’s size also allows him to stick out in ways that make him look like a god in comparison to others, which certainly reaches the desired effect of the feature.

With this serving as his acting debut, it becomes difficult to harshly critique Arnold’s performance here. He has never quite established himself as a strong actor but this first outing was definitely rough to watch. He delivers his lines in a way that would eventually make him a famous movie star but to an even worse degree. It’s also shocking to think he made this film at the age of 22, which just seems so strange considering his large and muscular figure does not seem like it should belong to someone so young. As his first foray into acting he does just enough but he certainly does not receive a script or direction to help him more than the rough performance he gives. His main purpose here was to show off his large muscles, be strong, and act like a foreigner of the land. He served this on multiple fronts, which makes him a good casting choice for the role.

Nothing to write home about in any facet of its filmmaking. Hercules in New York mostly serves as an opportunity for anyone to witness Arnold Schwarzenegger first film role. It demonstrates exactly what will make him the man to lead so many action movies in the not too distant future. Probably one of the best people to portray Hercules in a live-action film through the prism of just looking at physical attributes, not so much with the acting. The rest just feels very cheaply movie made with no real personality to boot either, which is what could be expected. Hard to be harsh on it, but overall it’s a very mediocre film.