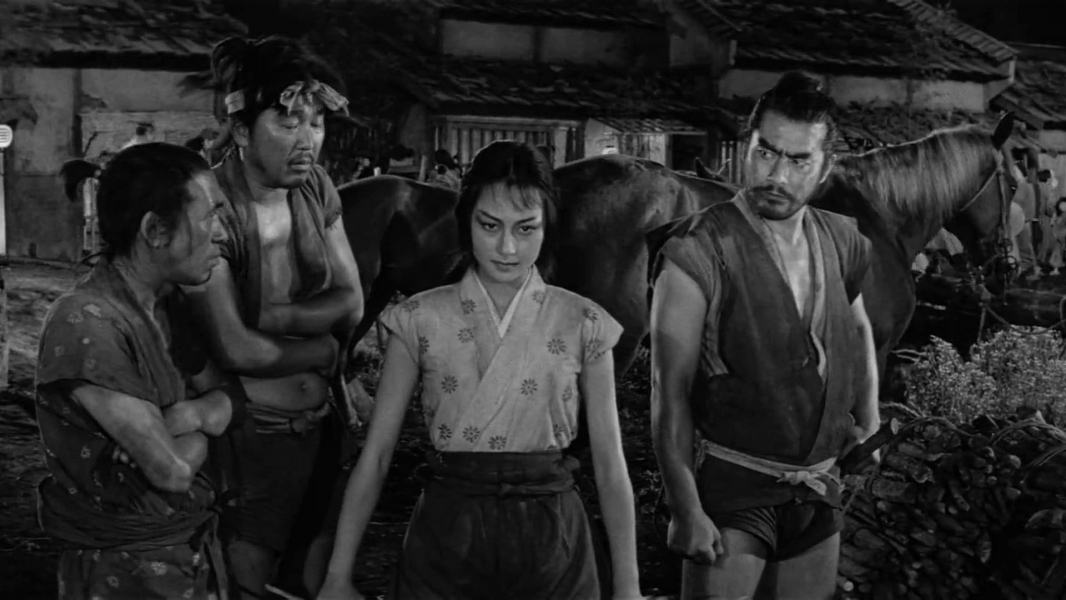 Unlikely heroes always make for entertaining stories as the expectations of them accomplishing the obstacles in front of them appear to be unlikely, which makes the ultimate resolution all the more uplifting. However, The Hidden Fortress asks if audiences would have the same care for unlikely heroes who try to avoid being a hero at any cost and only work for their own self-interest. Definitely a tough sell but one made successfully because they’re bumbling idiots.

With the Yamana clan trying to overtake and eradicate the Akizuki clan, war is in full force. General Rokurota (Toshiro Mifune) hopes to get the Akizuki princess, Yuki (Misa Uehara) to safety when they encounter two peasants named Tahei (Minoru Chiaki) and Matashichi (Kamatari Fujiwara) and has them join their group. As they get closer to safety, they must continue to traverse through more Yamana territory.

Feudal battles, deception, and increasing tension sum up what makes The Hidden Fortress an enjoyable feature amidst the legendary filmography of Akira Kurosawa. It has garnered the reputation of being an inspiration to Star Wars, which can be seen in the bumbling duo trying to protect a princess and provide safe passage. At that point, the comparisons begin to get a bit stretched, but George Lucas has not been shy in stating how much samurai stories influenced his work. In this feature, it all becomes about survival and the main perspective we see through Tahei and Matashichi demonstrate how easily an allegiance can be broken.

Following the two bumbling idiots almost starts out the story as a comedy with their efforts to join different clans for survival does not end up working for them. Instead, they get themselves into more danger prior to joining Yuki and Rokurota. Even if we get their perspective, this story does not try to redeem them as anything other than peasants who are ready to do what it takes to set themselves up financially. They are not “good guys” by any stretch, which becomes especially evident in the way they see Princess Yuki. However, the comedy they provide in their stupidity adds an element of humor to a story with plenty of tension continually rising. It makes their presence a good pushback against Rokurota, who has this general-like seriousness to him. This attitude certainly makes sense considering he’s tasked with protecting the last bit of hope for the Akizuki clan in Princess Yuki. So you have this ragtag group of loosely linked allies trying to covertly make their way around, with the only thing printing hope to the peasants comes from the gold at the other end of the rainbow.

The Hidden Fortress does a great job at setting the stakes and making it clear Princess Yuki will instantly be put to death if caught. It makes all of the effort undertaken by Rokurota worth it to the point where he asks her to be mute to differentiate what others expect from her. This certainly does not take away from the strong performance put on by Misa Uehara, who does plenty in her speaking scenes but also delivers daggers with her eyes to express her emotions on several occasions throughout the film. The vast number of soldiers the Yamana clan have at their disposal and out looking for Princess Yuki makes every interaction possibly their last with plenty of incentive for anyone they interact with to turn them in.

In this sense, this feature balances duty with reward, as Rokurota does everything for the good of the Akizuki clan while the peasants know that if they can get to safety with these other individuals, they can get their piece of the pie in cash and then live their lives. Two very different approaches in regard to honor, but the intention and motivations remain clear and the film ensures this gets continually reestablished as the narrative pushes forward. The moments of growth from the two peasants seem a bit unrealistic as we get towards the conclusion of the story, but the moral lesson they learn remains intact.

As a samurai feature, following the incredible success of Seven Samurai, this certainly feels like a step down for both Kurosawa and star, Toshiro Mifune, but frankly, most films would pale in comparison. Instead, this becomes more about espionage and not getting caught rather than engaging in battle with enemies. If any swords get drawn and need to be used, it means their original plan has failed, and judging by the number of enemies constantly surrounding them, most likely they will be facing their death.

This feature serves a different purpose and does it incredibly well with its band of characters. From the ridiculous and terrible behavior by the two peasants all the way to Princess Yuki trying her best not to interject because of the character she must play for her survival. Each day serves as another step closer to safety but it will come with its issues and instances where they must join a fire festival in order to fit in. A lovely adventure story to immerse yourself in.