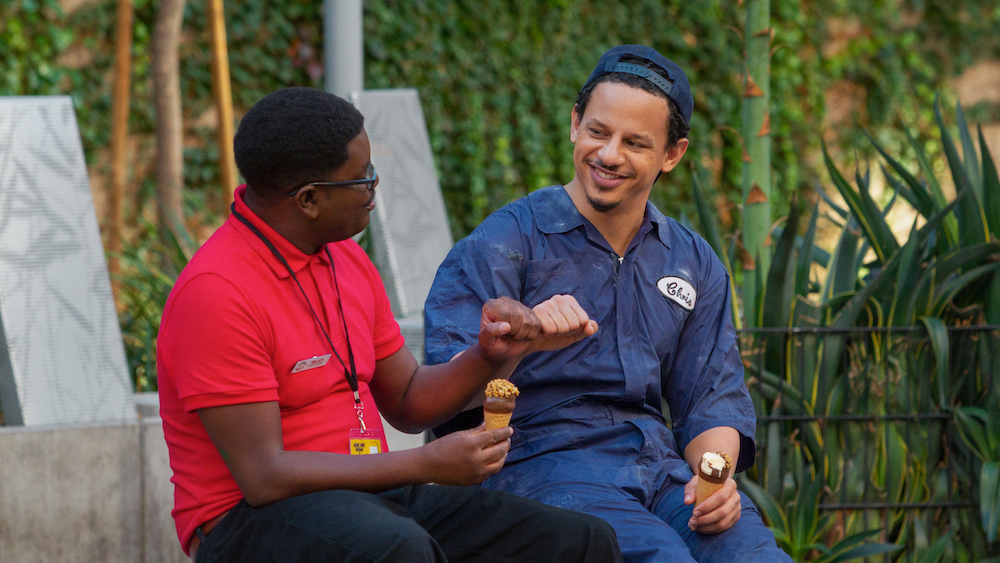 Film tropes set a standard for what can be expected within narratives utilizing them. It can be limiting for some but when it gets used in the way Bad Trip does, it flips them all on its head, while mixing in some insanely fun comedy. Truly an entertaining and extremely enjoyable film, this feature demonstrates the best of what improvisation can be within a narrative.

Both not living the life they would prefer, Chris (Eric André) and Bud (Lil Rel Howery) go about their days in Tampa, Florida. When Chris runs into his high school crush, Maria (Michaela Conlin) and learns she has an art studio in New York City she invites him to, he gets a new sense of inspiration in life. Seeing this as an opportunity to kindle a loving relationship, Chris and Bud steal a vehicle and make their way up North.

Serving as such a deliciously wonderful surprise, the way Bad Trip comes together as a feature boggles the mind because it represents everything Impractical Jokers: The Movie should have been. Taking individuals who excel in improvising and not being phased with acting in front of people unaware of the gag and make a feature film out of it. This movie, essentially, beat the Impractical Jokers at their own game and it excels in delivering incredible comedy as it pokes fun at tropes both in romantic comedies and buddy road trip films. Nothing about it feels trite and most of the fun came from watching the reactions of others.

Filmed with hidden cameras, this feature essentially has the actors play out their scenes where the extras don’t know they’re actually in a movie. This provides such a genuine experience in seeing the reactions of these background individuals to everything the stars of the feature do and it gets pretty wild. This ensures entertainment lands in two aspects: the comedy of what occurs in the story itself and then seeing everyone else react to it in shock or horror. Providing these genuine moments display how well film tropes would play out in real life. Take the scene where Chris tries to reconcile with Bud with the latter getting on a long-haul bus. This leads Chris to go into a massive apology and state how much he cares for his best friend, as one would see in a movie, but if you’ve ever wondered how real people would react to this grand gesture, this feature provides the answer.

Nothing but love and appreciation must be showered to the stars of this film because they really only get a few if even more than one opportunity to get their scenes right. Take the instance when the two friends spend time in a bar and Chris projectile vomits on someone. This particular scene can only be realistically done once because of the shock value it presents to the real people reacting as if this is an actual emergency going on. The production could not simply just run it from the top if they mess up the shot or Eric André flubs his line. Everything has to work to perfection the first go-around and it just works so well.

Eric André, in particular, goes for it all with this comedic tour-de-force performance. He delivers all of his cheesy moments with a level of insecurity to make people believe he’s actually going through these struggles as a person and not necessarily a role. Convincing audience members knowing this is a feature with turning into a character is one thing but making bystanders who have no idea what’s occurring in front of them become its very own challenge. From having a vacuum suck up his clothes to having an army recruiter talk him out of ending his misery, André truly does it all for our entertainment, and it leaves me eternally grateful for it. He certainly did not need to go that hard but he did.

The same level of respect must also go to other stars, Lil Rel Howery and Tiffany Haddish who each contribute in their own hilarious way. Haddish portrays Trina, who’s the meaner older sister of Bud played by Lil Rel Howery. The dynamic they build works incredibly well with Haddish essentially portraying the villain of this entire feature. She comes in with this menace much like a wrecking ball to mess things up and the way she interacts with these unknowing extras gives us another reminder of her brilliant voice in the comedy world.

A completely unique experience, Bad Trip allows for these comedic geniuses to perform in a way they never had before and we got the honor to enjoy it all. Watching the genuine human reactions to the hilarious gaffes taking place in this feature came together in such a fascinating matter because we would all do the same if put in a similar circumstance. It bends what art can be, especially in the way it gets crafted in such an unregulated manner where a director cannot yell “cut” and simply go for another take. Such a wonderful experiment and one that certainly paid off.