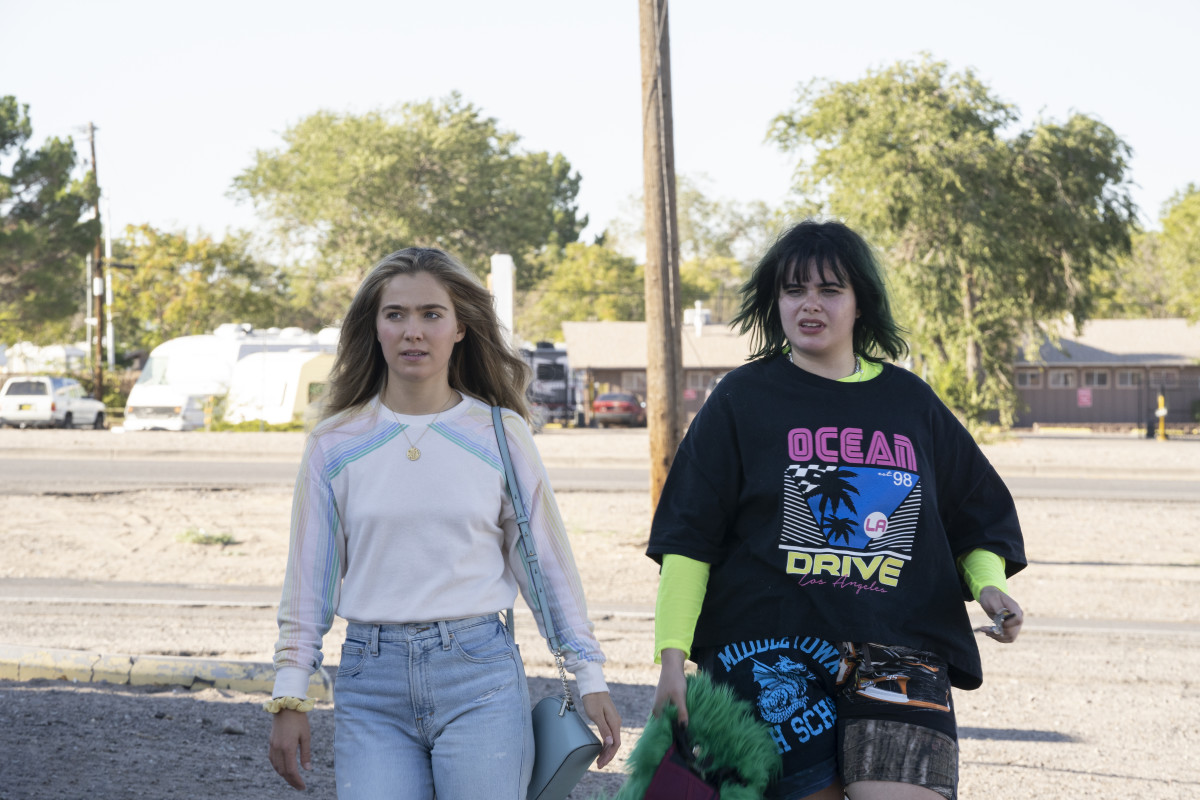 Abortion access varying state by state creates an imbalance in the resources available to women trying to make their own bodily decisions. This means women and girls trying to exercise these rights need to go out of their way in order to take care of their needs. An unfortunate circumstance but one handled with care and humor in the lovely Unpregnant. A road movie filled with plenty of heart and reflection.

Thriving both academically and socially, Veronica (Haley Lu Richardson) learns she’s pregnant and wants to abort it. As a 17-year-old, she cannot go to an abortion clinic without parental consent locally, which she will defintiely not receive from her religious parents. She learns the closest clinic that will do it without parent involvement is in New Mexico, which is quite the trek from Missouri. Veronica entrusts an estranged friend, Bailey (Barbie Ferreira), as they drive all the way down.

Reading my reviews would make it no surprise to anyone that the adoration and appreciation I have for Haley Lu Richardson knows no bounds. Such a star in the making and one who continues to impress me with each outing. In Unpregnant she definitely does not disappoint as she takes on a character that loves to navigate life having control over everything, which receives the ultimate disruption of teenage pregnancy with no nearby means to take care of it. Veronica then creates a plan for the dollar and mile trying to figure out how much it would cost and the amount of time it would take for her to follow through with this. Something that relates dearly to what I do for every situation, which further endears this character beyond everything Richardson puts into making her naive but also intelligent.

Veronica, as a character, has this calmness to her, which pairs incredibly well with the energy brought on by Barbie Ferreira as Bailey. Ferreira has really made a name for herself in her portrayals of the teenage experience with this project as well as Euphoria and she serves as the wild card factor, who disrupts Veronica’s plan on several occasions. A character who ran the risk of being annoying but hits you right in the feels as she goes on her own journey along with Veronica.

A history lingers between these two characters as it contains the experience of two individuals who were friends when younger but as they got older, they drifted in different directions. Everything displayed in this film explains exactly why. With them having very different personalities, the way they come back together and bond once again shows perceptions of difference do not cause as much a ravine as once thought possible. Yes, they have their differences and ways they no longer have compatibility, but that does not mean significant friendship cannot still exist. This road trip brings this perspective and creates several fun moments around a serious topic.

Watching this feature, released in 2020, could not escape comparisons to another film of the same year, Never Rarely Sometimes Always, which has a similar plot but a very different tone. The light-hearted nature of this film goes for something different than the Eliza Hitman-directed feature and has it serve as its own asset. Rightfully so, films centered on abortion contain serious tones because of the difficulty of the action and the journeys to actually complete them with religious zealots and systemic barriers getting in the way. Unpregnant does not necessarily skate around these issues, but just frames them more to align with what this film wants to accomplish tonally. Getting the abortion certainly drives the plot, but this story becomes more about the friendship between Veronica and Bailey with the procedure almost transforming into the subplot of the movie. An interesting shift and one that allows this feature to stand out amongst other movies handling the same subject matter. This film and the other aforementioned one, as a result, serve as a strong double feature regarding the topic of abortion to see what each sets to accomplish and how their tones do a great job of accomplishing it.

Not often do films about abortions fall into the category of being delightful experiences, but Unpregnant certainly falls within this category. Serving as a two-hander with a friendship story, this film knows exactly what it wants to accomplish when looking at the agency of teens and all of the obstacles in the way of trying to practice it. Religion certainly plays its part in the movie and not in a subtle manner. However, it matches the tone of the overall piece as it seeks to poke fun while also delivering an enjoyable story about friendship and how it does not have to expire just because some differences arise between a pair. If anything, it can make the bond stronger, which gets communicated in this wonderful little gem.

One Reply to “Review: Unpregnant”