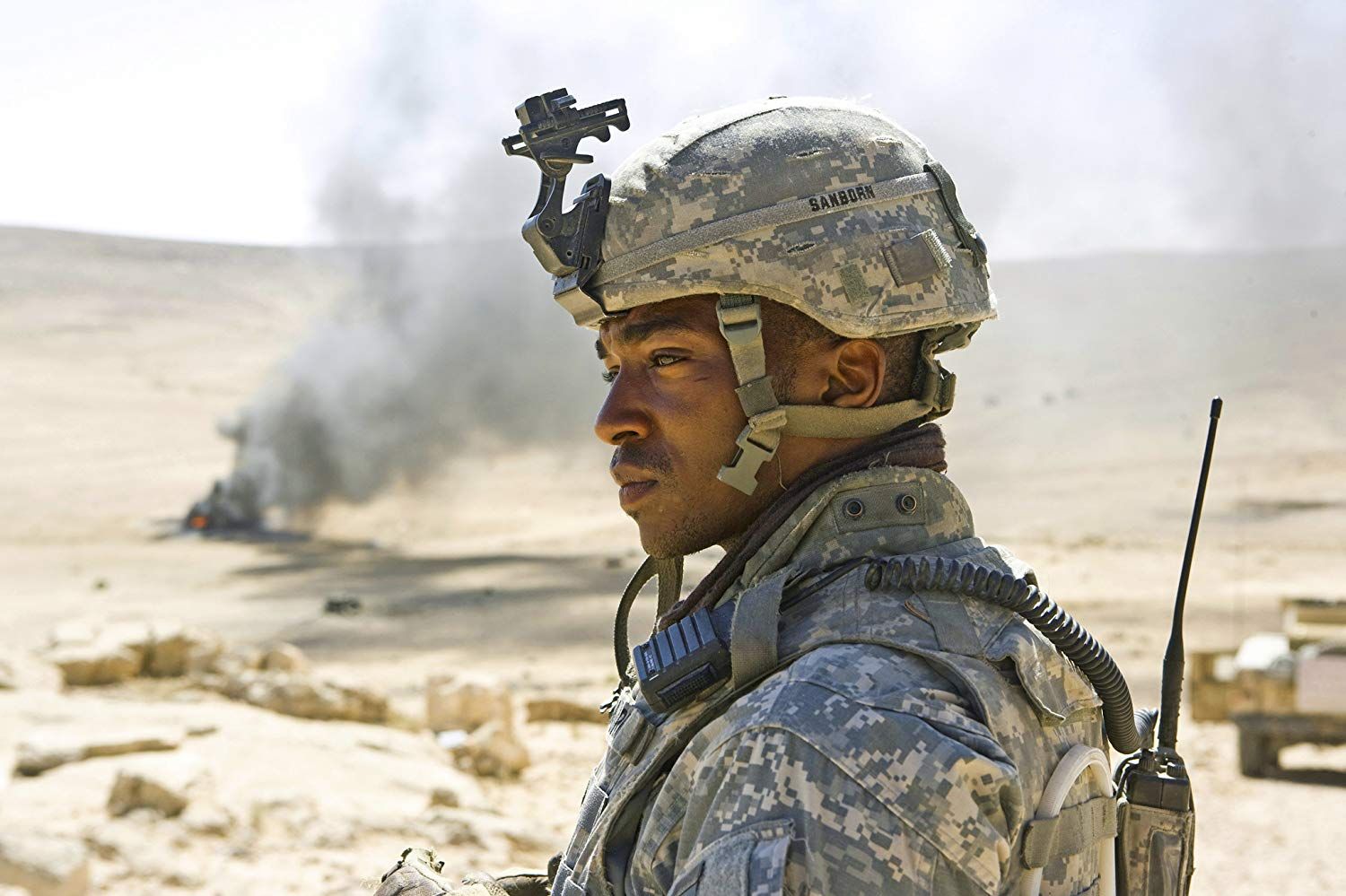 Not all jobs are made with the same pressures of what can occur if a screw-up occurs. For some, it could be a small grammatical error that can be fixed but for the men we follow in The Hurt Locker, it has the possibility to end with a bomb going off. A high-pressure position made for those who can pull it off and this feature tries to dig into what this type of person could look like, warts and all.

Heading out to serve with a unit during the Iraq War, Sergeant First Class William James (Jeremy Renner) specializes in defusing bombs and has quite the record. Now teaming up with Sergeant J. T. Sanborn (Anthony Mackie) and Specialist Owen Eldridge (Brian Geraghty), they go where they’re needed to defuse bombs where each new mission could be their last.

The amount of pressure in trying to put out a bomb with the rightful fear that it could blow up completely boggles the mind and makes you wonder what type of person would willingly take on this position. Yes, very noble as it can save a plethora of lives if done well but going into every call for a potential bomb comes with the reality that it could be your last day on Earth. You have to imagine you must enter each new day having made your peace in the world knowing the danger that comes with the position. This tension continually sits on the surface when watching The Hurt Locker and it reminds me of its highest attribute.

With the hot Iraqi sun continually beaming on the faces of the three characters we follow throughout, they have to hold all of this gear all of the time, move about with paranoia all before actually having to defuse bombs. An insane amount of pressure gets put on them, which makes their cohesion as a team so vital. As you can imagine with this being a feature film, smooth sailing does not really come so easily because it takes a specific kind of person to try and defuse these bombs. The type of person who can easily throw caution to the wind seeing as any bomb could be the one blowing them to smithereens. Almost a cavalier attitude, which gets seen through William James, and how he gives the appearance of how much he loves doing this particular job and the thrill it gives him. He even keeps reminders of the bombs he has defused in a little crate under his bed. This work needs individuals made from a different substance and part of what makes this feature so fascinating is seeing how this plays out in the three men.

James obviously stands out as the maverick of the group but Sanborn and Eldridge each bring something different and defining to the group because of trying to keep themselves alive and handle the erratic nature of James. It becomes a juggling act between the three to see who can keep the other alive long enough for each of them to go home. The narrative certainly provides many moments where it becomes a doubt of whether or not these individuals will take another breath but it makes for such a pulse-pounding and tense story. It’s all anyone could ask for, but this feature pushes it even further by adding other elements to the feature outside of the American troops in Afghanistan as it includes other players applying their trade in a warzone, like mercenaries.

In the midst of just trying to do their job, the trio we follow runs into a group of British mercenaries, which begs the question of their presence in this area. It allows for a larger discussion about those with interested stakes in what occurs in Iraq. Obviously, the horrible war raged there by the United States for seemingly no reason other than profiting from the oil and paying private contractors through taxpayer money. This surely does not take away from the work done by the soldiers on the field who sacrificed their lives for a farce in the grand scheme of things, but the bomb squads like the one followed here saved lives in defusing the way they did. Similarly, others found the opportunities like these mercenaries to capture those on the “Most Wanted” list in order to make their own pocket of change. This shows a difference of intention between the set of characters with the military men doing what they do under the belief of it being for the greater good on a micro level where these mercenaries see the war as a chance to make a profit. Everyone makes money except for the people of Iraq having to live a life full of unimaginable danger.

Even with a strong screenplay melding the film together and some strong performance by the cast, this film belongs first and foremost to Kathryn Bigelow. One of the modern pioneers for female filmmakers, she rightfully won Best Director at the Academy Awards for this feature and became the first woman to achieve the feat. How she’s able to maintain the tension and stress these men must encounter is nothing short of superb. She demonstrates exceptional control of the narrative and remains incredibly precise in what she wants to communicate through this feature where this life-risking behavior almost becomes a drug to James and he needs the thrill of it all. Working as part of a bomb squad may not be the healthiest way to go about it, but Bigelow ensures to frame the story in a way to respect his mindset, even if it does not represent the majority of soldiers in the military.

Fiercely constructed with plenty of thrills laced throughout, The Hurt Locker feels like quite the timestamp for perceptions of the Iraq War released several years after the start. It provides a different perspective and even with veterans coming out and denouncing the feature’s depiction of characters like James as authentic to the real experience of a soldier, this feature portrays a singular viewpoint and does it well. The accuracy may be a bit off but the content of the narrative remains strong.