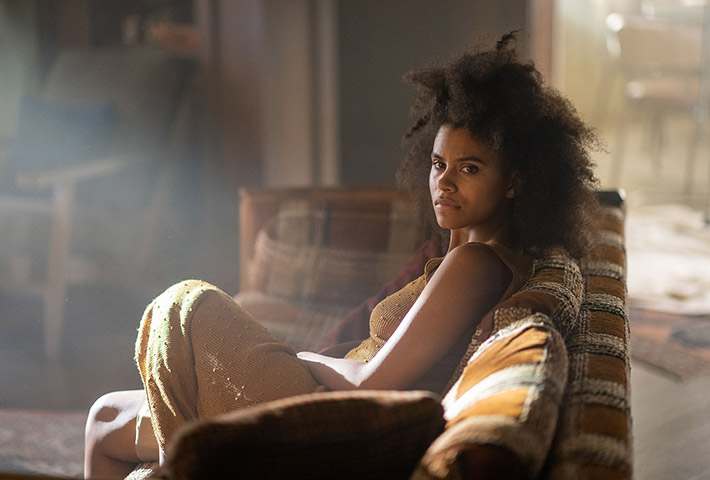 Concepts about the afterlife in feature films come aplenty because it often becomes a thought people eventually have in their lives, especially as they get closer to death. However, the idea of how we enter this world deserves just as much consideration and something Nine Days chooses to utilize as its premise. With the effervescent beauty of its screenplay, this story had the potential to be something absolutely astounding, but the execution leaves just enough on the floor to stop it from reaching a transcendent level.

Will (Winston Duke) works as a watcher of people’s lives, which he sees through television screens in his living room. Upon the death of one of his individuals, he must now replace them by bringing in a new person in the world and inviting a group of souls vying for their time on Earth. As he narrows down the selection process through elimination, he continues to ponder on what actually occurred to the person who recently died.

On a conceptual level, the idea stemming in Nine Days comes with so much potential and through this prism, it comes together as a film about how life can be appreciated and what it actually takes to make it out in the real world. Will’s job consists of monitoring his humans as he sees their first-person perspective, takes notes, and catalogs it. These humans become his people and he experiences everything with them from their downfalls to their triumphs. It comes as no surprise he builds a bond with them, which makes the recent premature death of one of them so heartbreaking. Something so sudden and as he tries to reconcile with what occurs, it shakes him to his core.

However, he still needs to select the next person who will replace that screen and enter the real world and the discernment he utilizes in choosing the individual comes from who he thinks will actually survive out there. These spirits vying for a spot make their case but in the end, only one can be chosen. In order to discern who the individual will be, Will puts them through a series of tests to see what they decide to do depending on the scenario, and then they spend most of their time watching through the screens of the living humans to learn what to appreciate in life. The beauty of this practice cannot be denied by any stretch, especially when learning what Will provides as a parting gift to those who have been eliminated. The virtue of the little moments of the narrative wonderfully highlights truly what a blessing it is to live, which this film wants to strongly emphasize. Truly something to appreciate, but the film is certainly missing something and it dampers part of the experience.

While the screenplay undoubtedly taps into some meaningful topics, there remains a distinct level of coldness in the presentation of this story that takes away from the emotional moments it wants to express. Where the blame lies does not specifically come from any specific element to put a finger on, but by default, it must be the direction. In some of the moments where there should be some emotional impact, it feels a bit stifled and stodgy instead. The words contain beauty but the way it gets expressed does not leave the mark it should and as a result, feels very flighty and missing panache. It would be difficult to blame it on the actors because they have distinct intentionality in how they portray these roles. It leaves the blame lying with Edson Oda’s directing, letting down his very own distinctive script. Something that really gets under my skin because he did one side of the coin nearly perfectly but flounders on the emotional execution. This idea had the promise of being a real tearjerker and the fact I was left somewhat cold by the finale feels like a miscalculation on the director’s part.

Life has never looked more beautiful and full of appreciation than when seeing it through the eyes of souls trying to find their rightful bodies. Some moments took my breath away, especially in the recreation of scenes the souls found particularly insightful. It demonstrates the power of this screenplay, which nearly propelled this feature into something supremely special but frustratingly it falls short and settles in the “very good” category Certainly nothing to sneer at as this feature has a robust amount of material to completely love.