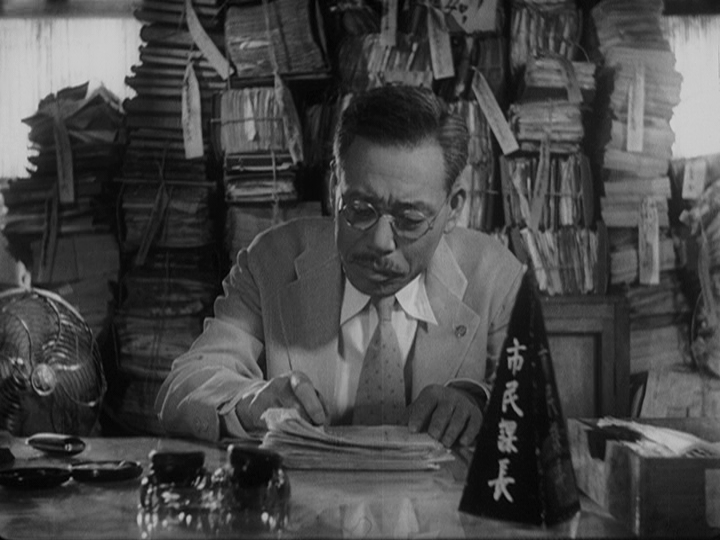 Going through life day by day and the attention it requires can allow for a lack of perspective of what it all means. Almost like a hamster spinning on a wheel with no idea that perhaps there is more to everything going on. In Ikiru, we see this realization in an abrupt manner as it looks upon what it truly means to live, as the title indicates, but also the soul-sucking nature of working in a bureaucracy only interested in pushing things through when convenient.

Kanji Watanabe (Takashi Shimura) has been a faithful employee to his local government for 30 years and holds the position of Section Chief of Public Affairs. He goes through the same routines every single day but following a doctor’s appointment, he learns he has stomach cancer and probably will not live for much longer. Processing this news, he decides to take a look back on everything in his life and try to comprehend what it means to live seeing he has barely been doing it for several decades now.

Akira Kurosawa has told such a large collection of stories throughout his illustrious career and many of them have an edge to them. Whether through the characters or the stories themselves, there’s always something prickly in his narratives, which makes Ikiru such an intriguing work. Most certainly his most compassionate and heartfelt feature, this narrative has a soft touch to its story while also containing a larger message attached to Watanabe’s character arc. Putting together this individual journey and how this singular experience fits into a larger cog truly comes through in such a perfect manner that it came to no surprise.

Opening with a group of women trying to get the local government to take a wasteless pit into something useful like a park but constantly being redirected at city hall to different departments almost plays out like a comedy. Change up the tone, and it feels like a satirical take of a comedy sketch about how no one in government actually wants to put in the work being requested by the people. Just continually passing the buck. However, the straight way this plays out drops any pretenses of this even being a joke, but an insult to the group of women trying to create something productive in the community. In a sense, this sequence seeks to also demonstrate the importance of collaboration and how this large machine of government works can be ground to a screeching halt without all members pulling their weight, which gets extrapolated more later in the feature.

This message remains incredibly clear at the beginning and end of the feature but at the center of it all is Watanabe, a man who can barely walk or even utter words. Mocked as a mummy by one of his colleagues, this character defines a pencil-pusher more than anyone in film history. A level of mundanity that would drive anyone into a lulling death, this diagnosis kicks something up for him to find a newfound appreciation in life pushing him to actually get to the bottom of what it all means. A sense of urgency brought on by the certainty of death made clear by this particular diagnosis and it becomes a journey for him interacting with different characters giving him views of what one should do to feel like they have lived their lives. In all actuality, living cannot describe what Watanabe has been doing as it most likely aligns with waiting to die.

Even with this being a singular story, the relatability it holds cannot be questioned and the way it can reflect many adults, particularly those reaching the twilight of their lives, speaks to what makes this Kurosawa’s most emotionally impactful work. This man has gone about his day thinking he’s doing what is best for his son, but letting his soul get sucked each day to the point where he’s some mindless and emotionless cog in a larger machine does not do anything but make the relationship incredibly transactional, as displayed in the narrative. In this particular journey, the film looks at Watanabe with particular care but a vital aspect of what makes this story so potent comes from not letting Watanabe completely wallow in his past decisions and excuse them. One character even calls him out for the excuses he builds around himself as to why he does not have a better relationship with his son, which is important to Watanabe’s character development and what he ends up doing later in the film.

Saying this might be Takashi Shimura’s finest acting work under Akira Kurosawa is quite the statement considering the incredible collaborations this pair have had throughout their impeccable careers. Shimura captures the frailness of this character where getting out a word feels like a complete chore to the man, and demonstrates how this individual has shriveled into this. The facial expressions alone communicate so much about what actually goes through the mind of this man as he struggles to fully realize what it means to actually live. He needs others to explain and demonstrate it for him and the bursts of confusion and excitement do much more than what the character can say.

Trying to define what it means to live as an abstract idea serves as quite the thought experiment but when trying to actually apply this to one’s life, it comes with its challenges. Watanabe’s journey looks at him trying to find the meaning in things he has not tried in his life, from the unconnected pleasure of women, gambling, and other ideas of what it means to live one’s life to the fullest. The conclusion this film gets wraps up not only his story but the larger indictment Kurosawa and the rest of his team have about bureaucracy. As the film gets told into two larger parts, the way it seamlessly brings them together gets right at the soul of this feature. The emotional moments do not come in with large emphasis, but it simmers throughout Watanabe’s journey and it proves this story feels like its own lived experience in such valuable ways.