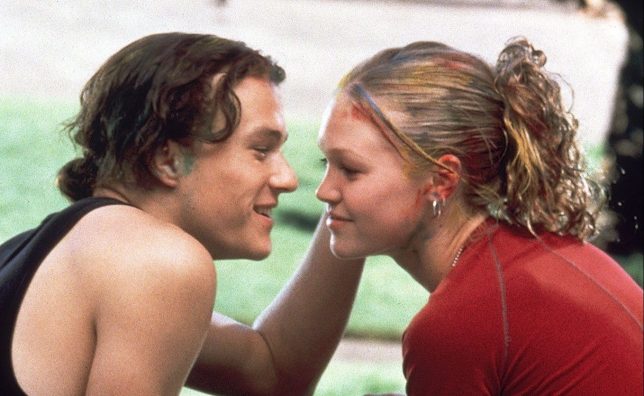 Adapting Shakespearean literature into romantic-comedies became quite the trend in the 1990s. It added the timeless tales of the literary figure mixed with teenage angst, as displayed in this film. 10 Things I Hate About You takes the ideas of “Taming of the Shrew” and brings them into a new century paired with some great young actors.

Starting at Padua High School, Cameron (Joseph Gordon-Levitt) immediately becomes infatuated with Bianca (Larisa Oleynik) and tries to ask her out in competition with the affluent Joey Donner (Andrew Keegan). The major roadblock they each face resides in the fact that Bianca’s father will not allow her to date unless her sister Kat (Julia Stiles) also finds a boyfriend. Joey then devises a plan to get Kat a boyfriend by paying resident bad boy Patrick Verona (Heath Ledger) to win her heart.

As with any romantic-comedy the courtship between Kat and Patrick beings with abrasiveness, which then shifts to moments of connection. Ledger and Stiles work so well together in this film as they portray two perceived outsiders finding love. Kat represents the shrew of this story and refuses to take part in the courting shenanigans of high school, as she prepares to attend college and meet more sophisticated people. She’s been spurned in the past with high school relationships and refuses to play those games once again. This marks the ascent into Julia Stiles’s’ peak in Hollywood as the 90s treated her very well with an abundance of roles. Her character has the heart of the story, as she tries to look forward to independence from a father afraid to let her go. Kat plays into the shallow and ridiculous type of 90s storytelling that a simple feature changes a character from being unwanted to undeniable. In this case it happens to be about resting frowning face and demeanor. Again, a ridiculous trope 1990s romantic comedies.

Ledger’s character, Patrick tries to have the persona of not caring about emotions but eventually breaks down that wall when interacting with Kat. Ledger has an undeniable charm to him that only makes it worse that we could not have seen him continue to age and adapt as a performer. He has the “bad boy” aesthetic in this film, but still exudes a type of contagious glee. That shows itself best in the “Can’t Take My Eyes Off of You” sequence to win over Kat’s heart. A beautiful example of the delight he brings to all of his roles.

The main focus of the film revolves around Kat and Patrick, with the other relationships not holding much importance. It all does begin with Cameron trying to date Bianca, who are both more childish in their approach to relationships. The story starts with this pursuit and then results in a more interesting and touching pairing with Kat and Patrick. All of the other performers are just fine as they navigate the typical 90s cheesy dialogue they received.

Shakespeare’s “The Taming of the Shrew,” has always stood as one of my favorite pieces by the legendary writer because of the levity throughout the story. Getting through “Romeo and Juliet” and “Macbeth” seem like a slog compared to the fun these characters have in this story. Obviously, adjustments were made in order to modernize the story and it works very well. There happens to be plenty of heart throughout the production even if it follows the basic teenage romantic-comedy formula. It includes deception, heartbreak, reconciliation and everyone dressing up to attend prom. It provides everything for a good time and this film’s legacy has endured throughout the years to be one constantly revisited. Whether it be for the young stars ready to make their name in Hollywood or the incredibly fun moments it provides. 10 Things I Hate About You brings the goods and the energy this film exudes will continue to harness its impact on popular culture.