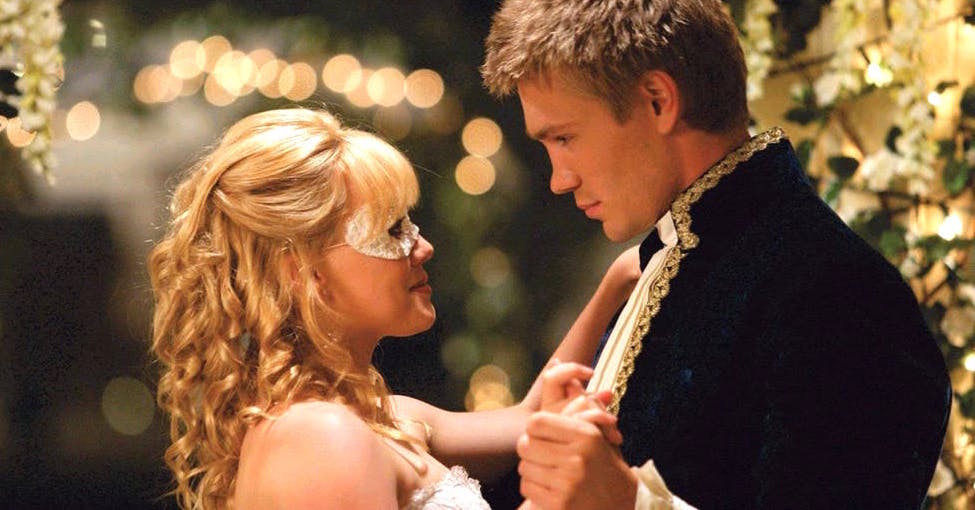 Adapting a classical and magical story to our reality presents challenges of taking outdated concepts and making it seem plausible today. The success rate varies with Shakespearean ones being the most successful in my eyes. Even with its hearty attempt and genuinely sweet moments, A Cinderella Story fails to measure up because of its shoddy quality but also because of its absurd plot points.

Once living a life she adored with her father, Sam (Hilary Duff) must now live with the treacherous and mean stepmother (Jennifer Coolidge) and stepsisters. She spends her days working at the diner her father owned and shares loving messages with an anonymous admirer. As Halloween approaches, they agree to meet each other in the middle of the dance floor.

The classic tale of Cinderella has drawn plenty of criticism because of the way it depicts how women should just aspire to find a man, which will change their lives. Retellings of this story allowed for a modern look but A Cinderella Story struggles because it attempts to fit in the major plot points of the tale it adapts and it just looks ridiculous in the end. As the story dictates, our protagonist must meet with the prince charming of her era but then he struggles in finding her after she leaves a valuable possession. In this film, the charming prince, Austin Ames (Chad Michael Murray) mentions while they dance that he could never forget the beauty of her eyes, as Sam wears a mask to the dance. A very sweet thing to say if not for later in the film they have a conversation where he looks directly into her eyes and cannot immediately tell she’s the person he fell in love with through their messaging. In the classic tale, the discovery makes sense because Cinderella remains mostly hidden for the slipper to be tried on, but this search just continues to go on to an annoying degree.

For a plot, it feels like the 2000s threw up all over the screen with the various looks and attitudes this era gave rise to. I found myself unsure if this film perpetuated all of the high school movie cliches or straight up invented it. The narrative has the classic high school quarterback falls for the quiet and bullied girl along with a literal moment where he tells his dad going to USC is not his dream, but rather his father’s. I had to stop myself from laughing on occasion because the film fell into parody at times but the story presented it out with complete sincerity.

In this telling of this Cinderella story, the protagonist does not sport the name but represents the character in every other facet. From the terrible stepmom and stepsisters, to working incredibly hard while being treated awfully by them. Besides this, much of the story only tangentially relates to the plot of the famous tale except for the moments where it tries to remind you of it like when she needs to arrive at the diner at midnight for no reason made clear until the moment arrives.

I cannot be too harsh on this film, because of the target audience it wanted to endear. When you have a 2004 film starring Hilary Duff and Chad Michael Murray, the audience they were trying to interest becomes fairly clear from the onset. They did not act well by any stretch but they did what they could with the type of film A Cinderella Story wanted to be. The true acting MVPs go to Regina King as a coworker at the diner named Rhonda and Jennifer Coolidge as the evil stepmother. King brings her typical caring and compassionate aura to this role, serving as a maternal figure Sam has not had since the passing of her biological mother. She did not take anyone’s crap and she stood out as a pleasant surprise along with Coolidge, who always proves to be a delight in all of the appearances she makes. Her over the top performance makes her cartoonishly evil, which allows you to question what Sam’s father ever saw in her. You just need to see the tanning scene to get a good idea of the ridiculousness of this character.

For all the cuteness this film has, A Cinderella Story still manages to fumble its story because of its attempts to modernize its classic tale in an unproficient manner. It does not reach the heights of something like 10 Things I Hate About You, where it takes a fairly sexist Shakespeare play and brings it to the 20th century. All of the conversions to 2004 don’t really hold water and it would have been better off being its own thing. This film holds absolutely no originality from the story it adapts or the way it presents the narrative as it uses far too many cliches. Overall a disappointment but provides mild entertainment in moments.