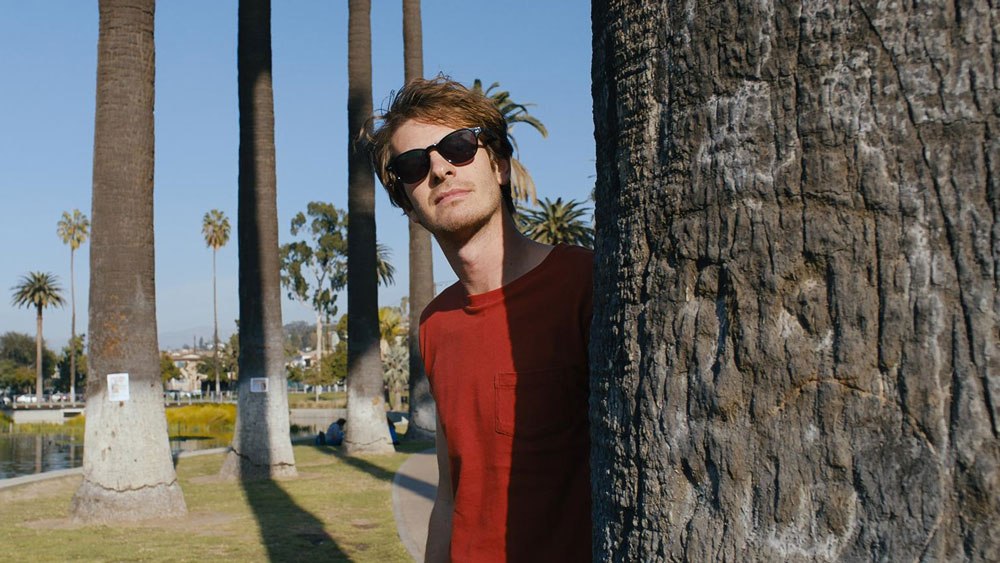 Sometimes coincidences don’t mean anything unless they take part in some grand conspiracy that encompasses everything in pop culture and the way everyone perceives the world. It can only be one or the other and through incredible manipulation, Under the Silver Lake chooses the latter. It results in a story that continues to down a rabbit hole of signs and events that could be all interconnected or simply be part of a guy just losing his mind. That decision lands on each individual audience member to render, but the sheer attempt of creating this film makes it impossible for me not to enjoy it.

With nothing really meaningful going for him, Sam (Andrew Garfield) needs something to jolt his obsession with conspiracy theories. This occurs when he meets one of his neighbors, who he spends some time with and then mysteriously disappears without saying a word. This leads Sam down a journey where he questions everything he ever knew and encounters a vast amount of colorful characters in the process.

It’s really hard to talk about what happens in this film without giving away many of the insane reveals that occur throughout the story. It should be experienced with as little knowledge as possible because the directions it goes in honestly presents the most unpredictable set of sequences I have seen in films for a long time. Part of that unpredictability reveals the story’s absurdity. Under the Silver Lake makes not only its protagonist question the reality of his experiences but also the audience. There are moments where I was left shaking my head saying, “there is no way that is actually happening.” Several moments, in fact, where I uttered that phrase throughout the runtime of this film. That might be a small critique of the story because the stakes feel weak due to some of the unbelievable aspects of the story. It works for me because it sucked me into the rabbit hole of trying to figure what in the world happened, just like Sam.

This film works as a thematic level when condemning Sam and his very obsessive nature. Sam shows an utter disregard for anything that does not surround his quest to finding answers to his mystery. He does not work nor does he pay his rent. When given multiple opportunities to fix everything, he throws it away to continue this pursuit that could lead him anywhere. It’s a criticism of the type of guys that feel like there’s something bigger out there for them and see every little thing in the world as an interconnected web that somehow has to deal with their specific experience. Through this pursuit, he loses touch with all of his other relationships and any bonds formed in the past. He becomes so completely enraptured by finding out this mystery and nothing else truly matters for him.

The 2010s decade has been a breakout decade for Andrew Garfield as he first popped onto the scene in The Social Network and then took over the mantle of the web-slinger in the two Amazing Spider-Man movies. Despite his jump into mainstream filmmaking, he has spent the latter half of the decade working with smaller and weirder pictures, which include Silence and now this film. With the character of Sam, he does something I have not seen him before as an actor, which is portraying a total asshole in every sense. It shows the development of Garfield’s range and how he continually improves as an actor. He takes the opportunity to expand his brand in taking a role like this and I hope he continues to do so in the future because he delivers the goods in this film. He was nearly unrecognizable for me through the behaviors and the off-screen persona that he has built for himself.

Neo-noir would certainly be the proper genre classification for this story because of its mystery elements and the idea of the mysterious women throughout there to allude the protagonist. Every other character that isn’t the protagonist represents someone that can help him further his goal of uncovering the conspiracy theory, which creates a natural distrust between the audience and everyone else. The way Los Angeles comes to life in this film shows a different side I have not really experienced in other films. Its comedic moments are layered between some weirdly horror-tinged vignettes. Under the Silver Lake has everything but comes together rather sloppily, as it requires some serious suspension of disbelief to fully be invested in this journey. I was able to do that and fiercely enjoyed all of the madness that ensues in this oddball film.