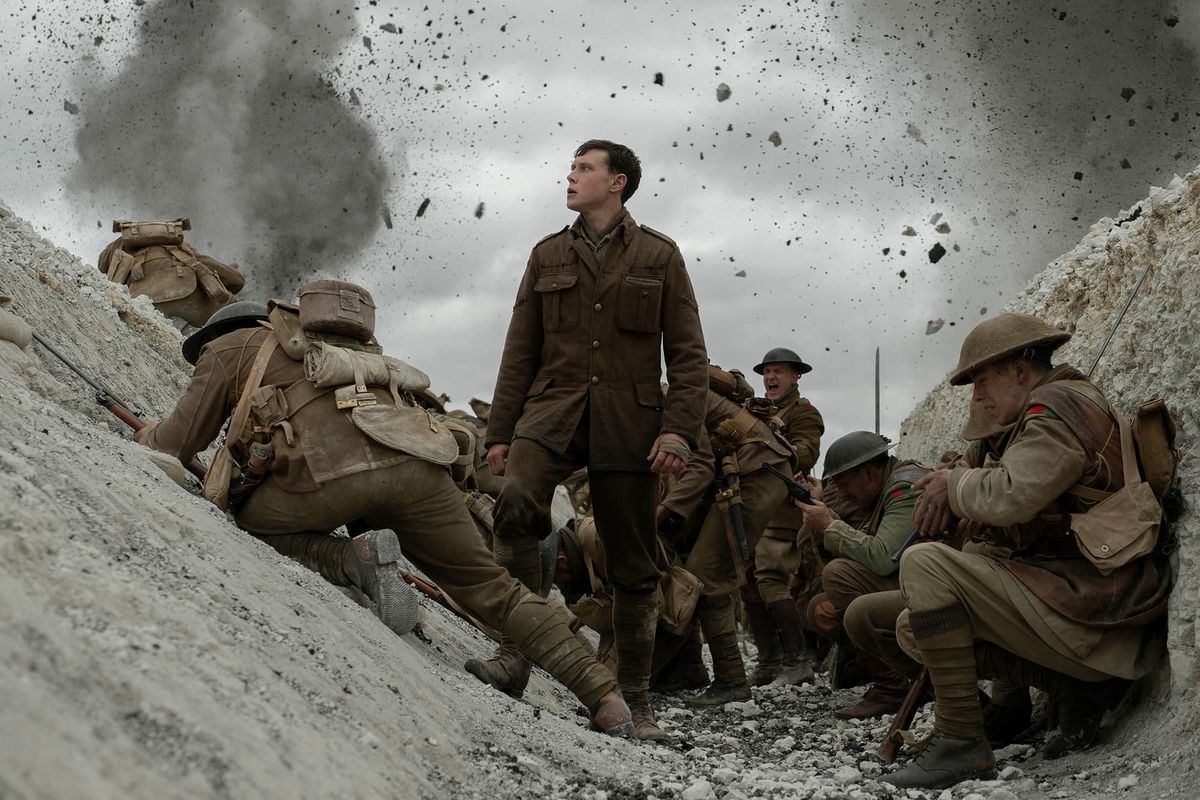 While wars begin for political reasons on a macro level, the individuals on the battlefield typically get lost in the shuffle. With that scope 1917 brings the story close and personal as it follows two men on a treacherous journey.

As the Germans retreat from the western front leaving room for the Allied forces to gain ground, Lance Corporals Will Schofield (George MacKay) and Tom Blake (Dean-Charles Chapman) receive the mission of reaching a British battalion about to strike. Intelligence reveals that an ambush will happen if that battalion charges. Schofield and Blake have one day to get there and save the men, and Blake’s brother.

Leading up to this film’s release the main talking point circulated around the tactic of the story appearing to be one continuous shot, thus capturing the authentic experience of these soldiers on this journey. Obviously, the film did not get filmed in one continuous take, but hidden edits would need to be utilized to create the appearance. For the most part, the execution exceeded expectations as the camera movements worked well to stay with the characters and the illusion truly works. Even if it succeeded, I guess it’s important to ask if using that tactic enhances the viewing experience.

For me, it became a mixed bag. Through the utilization of one-shot, the film loses the scale it wants to create of being part of this big war. It also, at times, feels like playing a video game. Many of the shots follow the characters as they receive exposition from different commanding officers, as one would in a video game. Additionally, when following the two men on the journey it feels like they reach different checkpoints and collect certain items that will be useful later in a way captured in these games. With that being said, the way it all comes stitched together looks impressive. The camera stays with the characters and the audience experiences every horrifying discovery with them at the same time.

1917’s excellence derives from its technical features like the production design. The filmmakers created the trenches utilized in World War I and the detail of the dirty and harsh conditions showed expertise. All of the set design becomes more impressive with it being all outdoors, which makes it more difficult to hide deficiencies. The cinematography by Roger Deakins shows he still performs at a high level as the lighting and use of flairs create an astonishing landscape for these two men to prevail. Each location had its own features that made it a worthy checkpoint for the characters, whether it be a safe haven or looming danger.

With it being a film leaning into the technicals, the two actors, MacKay and Chapman do fairly well to connect with the audience. MacKay made some splash with his performance in Captain Fantastic and Chapman portrayed King Tommen in Game of Thrones. They receive the spotlight in this film as the camera never leaves their side. The rapport and chemistry they establish humanizes them beyond the avatars they could have become throughout the film. Chapman’s character Tom Blake has more stakes on this journey, as his brother resides with the battalion set for slaughter. He continues to push for as long as he can throughout the journey, even when it gets difficult. MacKay uses his facial expressions to exude the fear this journey represents for his character. Along with the two gentlemen, the supporting characters in the film were essentially famous British actors as commanding officers. They each had their cameos and most of them left a good impression with their limited time.

One little fun nitpick of the story for me personally happened when someone receives a stab wound. As someone who recently got trained in learning how to stop a bleed of many levels, the moment when one of the soldiers attempts to treat a stab wound made no sense. As soldiers, they should know that in order to stop major bleeding, the gauze should be packed into the wound, but they decide to just stack it on top and hold it down. A tactic that does not work unsurprisingly. I do not hold it against the film, but when the moment happened, all I could think about was the incorrect manner of caring for that wound.

As reported, this story and production comes from a personal story director Sam Mendes heard from his grandfather, who served during the war. His directorial achievement in the film stands out as one of his great works. Coming fresh off the James Bond franchise with the great Skyfall and the mediocre Spectre, he creates something grounded and original and displays his excellence as a director.

1917 will leave an impression through its visuals, sound work, and sheer adrenaline rush of these characters trying to reach the battalion in time. The score by Thomas Newman evokes heroism, dread and hits all of the right notes for this film. It left me baffled during some sequences trying to figure out how exactly they pulled it off. A true success and one of the better war films of the 2010s.