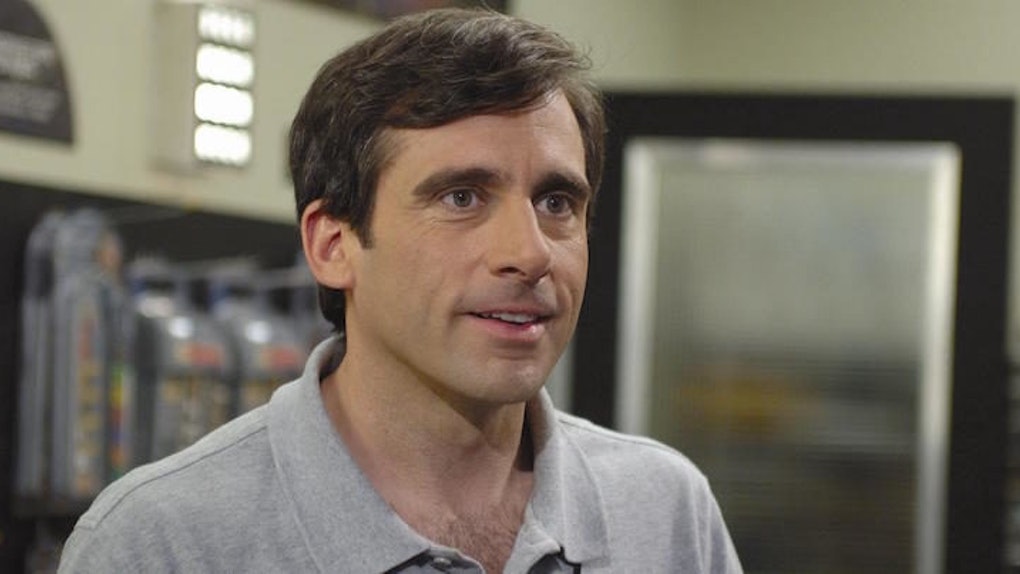 The sexual exploits of men seem to always be a competition or for storytime. Men have the expectation of having sex and to do it with a wide array of women because bro culture aligns mostly with heterosexuality. Anything less puts a man in the face of potential ridicule as it occurs in The 40-year-old Virgin, which starts well and dissipates when it reaches the third act.

Living life with his massive action figure collection, Andy (Steve Carell) admits to his friends that he’s never had sex, which prompts them to give him tips as they vow to get him laid. Through the different suggestions, Andy tries to use his sincerity to ultimately get intimate with a woman.

As with any comedy, it needs to have a funny central premise for it to succeed. The idea of a man not having sex until he reaches the age of 40 does not have inherent comedy, but the work by Judd Apatow and Steve Carell make it so. Carrell has become a comedy icon of the 21st Century through his work in film and television and he does much of the heavy lifting for this film to be successful. His character of Andy goes through some fairly wild actions and procedures in order to be ready for his first sexual experience. The standout scene came from Andy receiving a wax treatment to eliminate the large amount of body he has accumulated. It scared me personally as someone deathly afraid of receiving a wax treatment, but Carell’s delivery of the pain while also being on the phone made it incredibly hilarious. When it got to his nipple, I had to look away. This scene along with others doesn’t work without Carell and the tremendous work he puts into this role.

The central relationship Andy tries to eventually turn into his first sexual experience occurs with Trish (Catherine Keener). This relationship actually came together to be very sweet overall, much to my surprise. With the central premise and the talent behind it, I expected the relationship not to have the great moments it had. It does contain the arbitrary fight moments for something that became rather confusing but when looking at it overall, it worked because of Carell, but also Catherina Keener. As the primary female character of the film, she creates a big presence and embodies a character willing to take it slow with Andy.

The supporting group of friends certainly add their comedy, especially when considering the talent involved with Paul Rudd, Romany Malco, and Seth Rogan. Even with all of the confident talk of their sexual conquests, each of them reveals to have their insecurities about their relationships. Even with one of them telling Andy that having sex can ruin a relationship. They help complement Carell’s performance with their own good moments.

Even with its positives, The 40-year-old Virgin has its major flaws with the biggest one being its very bloated runtime. It seems to be something that comes with many Judd Apatow films as he tends to overstay his welcome. Comedies are quite difficult to sustain for a two-hour runtime and this film lands at a whopping 2 hours and 13 minutes. Not something that automatically makes it worse but this film starts to lose steam towards the third act. By the time I felt the film should start to wrap up, I saw that it still had 40 minutes to go and those moments felt like hours. It lost me around the time where Andy and Trish start to have their issues and it feels like the issues brought up cannot get resolved in the clean way this film wraps up. It lost its traction at the point where many comedies do, which comes from doing the dramatic turn. The resolution fell rather flat for all the runtime it had.

Ultimately, The 40-year-old Virgin provides plenty of laughs with a story that loses some of its shine but still takes its premise and makes it better than it had any business being. Even with the crassness it employs, it has plenty of heart in between the humor. It has a great collection of comedic talent that plays well together and in the end, creates something very entertaining and enjoyable.