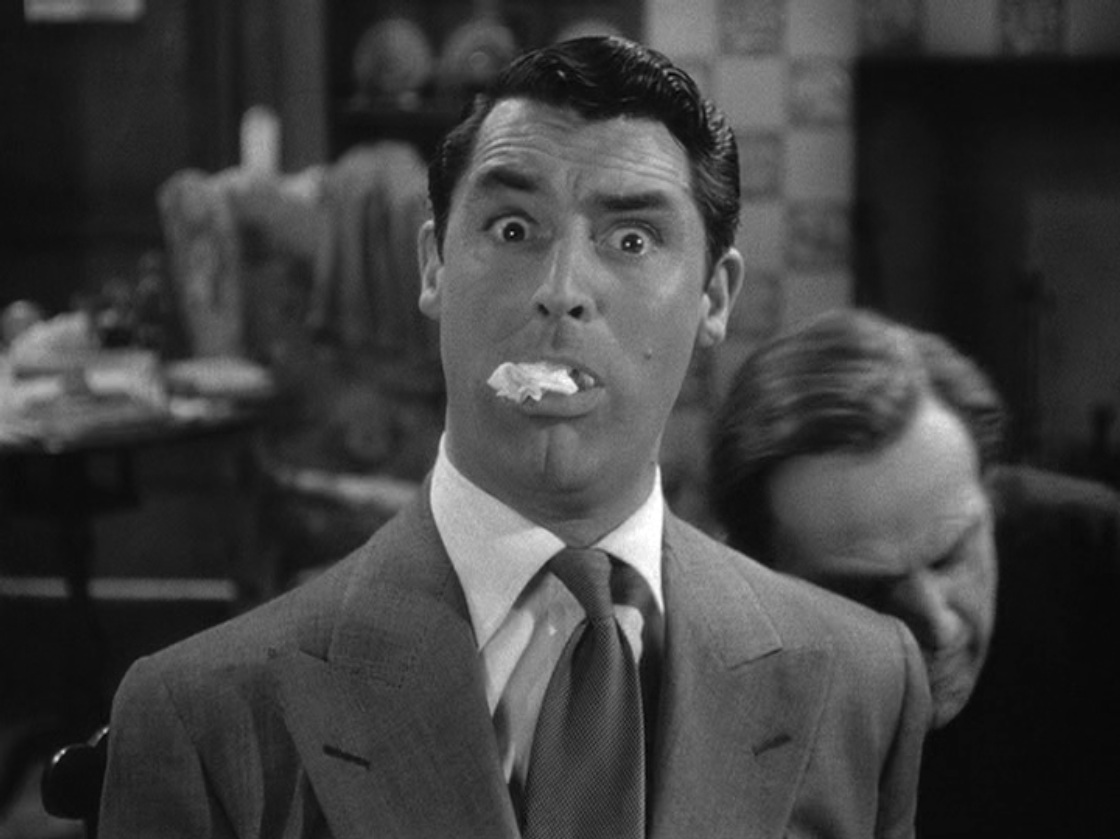 You can’t choose your family. They’re the ones that raise you and sometimes you have to put up with their antics even when they might act a bit wacky. Couple this idea with an incredible comedic display by an entire cast and you get a completely realized comedy classic delivered by one of my favorite directors.

Previously being someone reluctant to enter into marriage, Mortimer Brewster (Cary Grant) agrees to marry his sweetheart, Elaine Harper (Priscilla Lane). Before heading off to their honeymoon, Mortimer decides to pick up something from his aunts’ house. Upon his search, he discovers a dead body in their house, which leads him down a rabbit hole of his aunts’ schemes.

Watching a film titled Arsenic and Old Lace raises several question marks considering long exposures to the former can be quite toxic. Knowing little to nothing of this film prior to my first viewing experience may have been the greatest gift of them all. The film begins with a man learning that his way of thinking may be flawed and when he’s so close to paradise, he suddenly enters a hellscape he cannot wait to escape. The second Mortimer enters his aunts’ household, everything dives into the unfathomable. The story continues this descent and with it, the comedy just gets better and better.

The comedy has such a great impact because of how dark the subject matter becomes and how Mortimer seems to be the only sane person in the house. His discovery of his aunts’ practices of killing lonely men in order to put them out of their misery seems completely normal to them but rightfully stuns Mortimer. Their exchanges as he learns more about their methods only heightens Mortimer’s role as the straight man, as he reacts to everyone seemingly being okay with first-degree murder. It’s not like these are ghoulish over the top women that kill people for the fun of it. They genuinely think they are doing these men a service just like when your grandmother bakes you a pie. Each joke lands like an anvil partly because of the writing, of course, but also Cary Grant’s phenomenal comedic timing and performance.

Grant has starred in his fair share of screwball comedies like The Philadelphia Story and Bringing Up Baby, but this film feels different from the others. It comes from the stakes involved. Mortimer has everything to lose once he discovers what his aunts have been doing as he has a wife ready to go away with him for a honeymoon. If the police arrive, they may believe he’s involved and he’d get wrapped up into that unpleasant process. Grant does so well with the physical comedy as he jumps in shock of every new revelation the story reveals. The facial reactions Grant conjures allows him to be the stand-in for us all as he has a hard time believing the ridiculous circumstances and that’s all before Mortimer’s evil brother arrives.

While the comedy works, the film does show its age in the way it looks at those battling mental health conditions. It’s seen as a joke, especially with Mortimer’s other brother, Teddy (John Alexander), who believes himself to be Teddy Roosevelt throughout the film. The other characters, particularly Mortimer, spend a lot of time trying to get him to put him in a penitentiary because Teddy believes himself to always be at war and charges up the stairs. Given that Arsenic and Old Lace came out in 1944, I decide to give it a pass because of it being a product of its time. Even if it still has not aged well, it does not maliciously view Teddy as a menace, but more so makes him the butt of many jokes in the narrative. Something that may be tasteless today.

Even if the film very much plays like a comedy, it has become the quintessential Halloween film for me. It takes place during the holiday and the shenanigans get very dark while always keeping a strong comedic tone around it all. The only one who seems to be taking everything seriously is Mortimer. If not for him, entering that house could be its own horror film. That definitely happens to be the case when Mortimer’s evil brother, Jonathan (Raymond Massey) steps into the narrative and starts scaring everyone. It carries that fine balance of comedy and genuinely frightening moments, which could easily go array if under the supervision of a lesser director, but luckily Arsenic and Old Lace had one of the best to ever do it.

It makes for an interesting film made by one of my favorite directors, Frank Capra. Someone who typically shows what America can be at its best in films like Mr. Smith Goes to Washington, It’s a Wonderful Life, and Mr. Deeds Goes to Town among others. It feels like something outside of his wheelhouse, as I would not describe his other films to be too comedic and especially not scary. He typically tells inspirational stories that get incredibly sentimental. As the story progressed, I kept remembering that Capra directed the feature and I continued to be shocked, but it shows that he has some strong versatility with his direction. This story comes from a play and it certainly feels that so with the way Capra focuses on the living room of the aunts’ house. Most of the action takes place there with characters entering and leaving. Even with that production design, it doesn’t feel stagey, because of the dynamic way Capra focuses on the characters to emphasize their intentions and actions.

Arsenic and Old Lace will deliver a ghoulishly delightful good time for anyone who enjoys themselves some dark comedies. It felt odd with it coming out in the 1940s that it would display some of the elements highlighted, but it only makes it all the more fun to experience. The combination of Capra and Grant had not been seen before and they worked exceptionally well together. Pop this on during Halloween and be prepared to laugh, gasp, and enjoy the masterful physically comedic display by one of the best actors in the history of cinema.

One Reply to “Review: Arsenic and Old Lace”