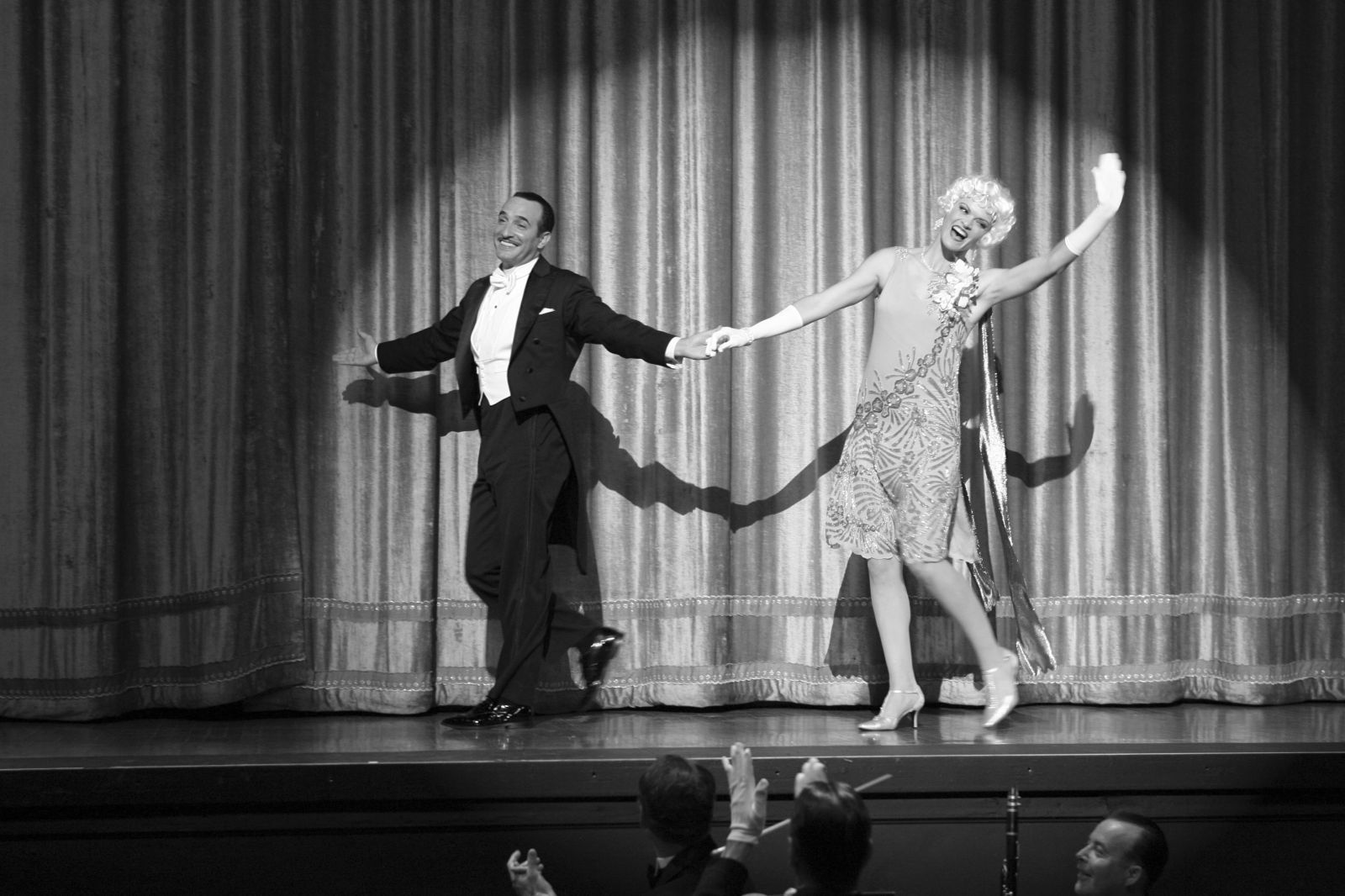 Shifting from silent film to ones featuring sound became a major point of contention for those who excelled in the previous way of things. It simply came down to them deciding to go along with the new way of filmmaking or being stubborn to the old ways and getting left behind. It happens to the best of them and our protagonist chooses the path of most resistance as this film details.

Beloved for his work in silent films, George Valentin (Jean Dujardin) meets Peppy Miller (Bérénice Bejo) when she gets shoved onto him at a red carpet. They strike a friendship and a good working relationship until the critical moment of change hits both of them. Peppy decides to ride the new wave of sound films while Valentin decides to tick it out and make his own silent films. Their results vary.

The Artist deserves credit solely for being a silent film in the 2010s. It brought back a style of filmmaking that existed as the norm up until around the 1930s. Actually being able to hear the actors changed the game for cinema-goers who were accustomed to the physical and silent comedy of Charlie Chaplin and Buster Keaton. Instead of reading the title cards that accompanied the scenes, the audience could hear the words coming directly from the artists. As we got closer to the new millennium, silent films have become nearly extinct and The Artist landed at the Cannes Film Festival and took over the rest of the awards circuit following it.

Watching the film does deliver the same features that made silent films so enjoyable to experience. It comes down to the simplicity of the storytelling. The creators needed to do more showing than telling with their stories. They could only have so many title cards in a story so they had to figure out ways to do the most through character movement and expression. The Artist accomplishes that through it’s storytelling and how the actors successfully convey the emotions that don’t need to be laid out through dialogue. It sets for more of a challenge depending on the way you look at it. Seeing as I’m not an actor, I cannot fully comment on what would be more difficult. Bérénice Bejo and Jean Dujardin work well together and the chemistry their characters have in the narrative works because of their excellence as actors.

It doesn’t feel too fresh as a story, as it’s not the first film to detail this shift in Hollywood production. While it’s not exactly like Singin’ in the Rain, many of its plot points have a similar feel. In a way, it’s like the 1952 musical, but just vastly inferior in every way. Not many films can measure up to that masterpiece, in my eyes, but the dancing sequences in the feature look very well choreographed and display a type of fun and strong energy behind it.

The film also makes an interesting comparison to contemporary times and what may be considered a trend versus what will be the way of the future. Valentin felt that sound would be a gimmick that would go away after the audience realizes the difference, which was obviously a wrong opinion. A comparable difference comes from the rise in digital filmmaking rather than using film reels. When it first arrived, the picture difference befuddled film purists, as it did not provide the same level of clarity and crispness. If one looks at most films playing at their multiplex, the evidence shows that digital has won the war and took over even with prominent purists like Quentin Tarantino and Christopher Nolan still fighting the good fight. It seems unlikely that they would fall the way Valentin experiences in this story, but I wonder what the next new trend will be that challenges the filmmaking status quo.

Ultimately, The Artist delivers much of the magic that has been missed from the silent era and put together a good story as well. Without prior knowledge, I could see how someone would think that it was actually made in the 1920s. It does not reinvent the wheel, but it reminds us of an effective wheel that has been left behind but still carries merit today.

2 Replies to “Review: The Artist”