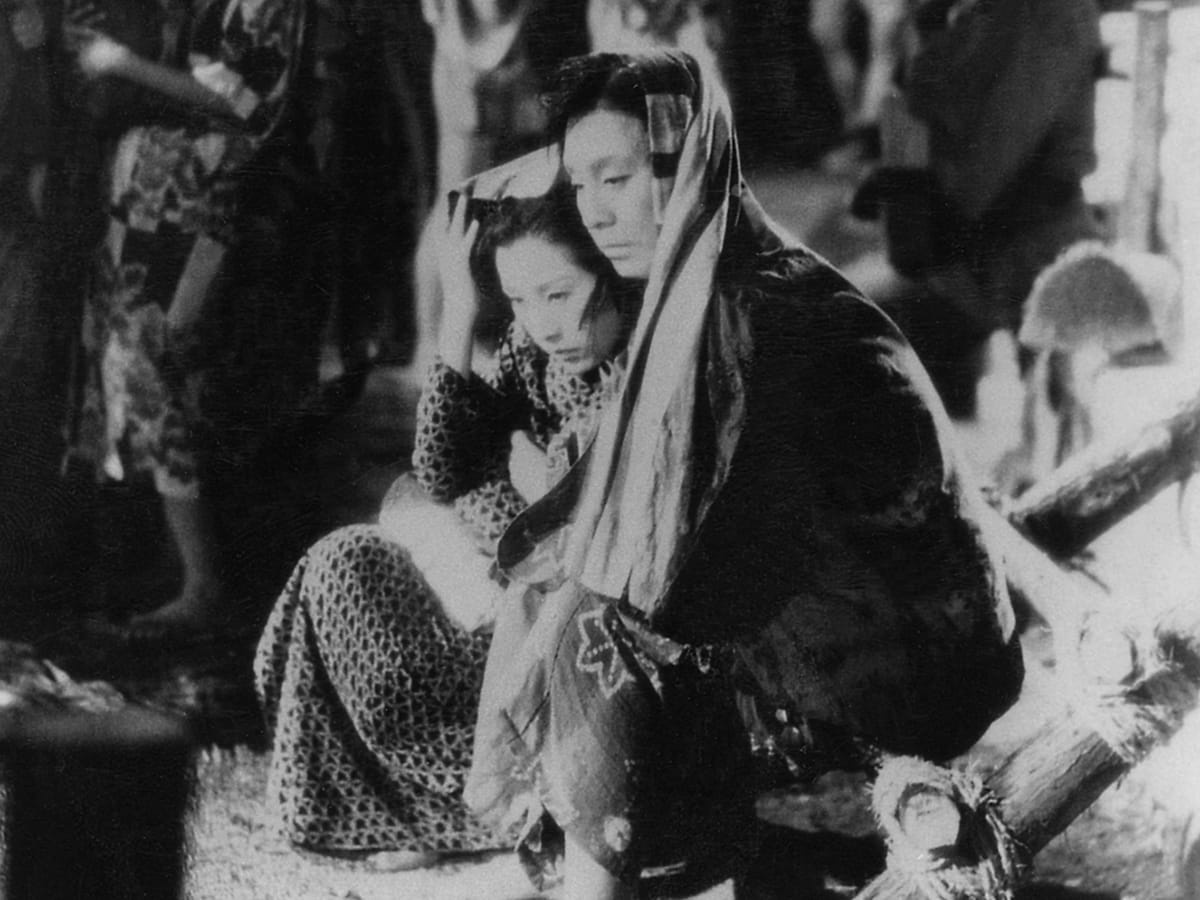 Truly loving someone requires sacrifices at different moments in a relationship. On a personal note, my wife made the sacrifice to turn down a job she really desired because she wanted to go with me to a different state for graduate school. Something I have attempted to repay every single day. Those moments of pain and sacrifice says plenty about how much love exists and we get to see one of the more beautiful and poetic ones in the 1939 classic The Story of the Last Chrysanthemums.

Kikunosuke Onoue (Shōtarō Hanayagi) works as an actor with great expectations as the adopted son of the famous thespian Kikugoro Onoue (Gonjurō Kawarazaki). While he tries his very best, Kikunosuke is not very good, which leads to people praising him to his face because of the name he carries, but mocking him when not in his presence. The only person to be completely honest with him is the wet-nurse of his father’s biological son. This raw honesty makes him reflect on his true purpose.

The message found in The Story of the Last Chrysanthemums embodies such beauty with the elegance of its characters and the part pride plays into their decisions. We mostly follow Kikunosuke in his journey trying to live up to a reputation with an output that does not seem to match it. The fakeness of the world around him creates such a delicate level of ego around him that it took one well-meaning conversation with someone at the level of a wet-nurse to bring it all crashing down. A type of honesty people rarely have except for probably one person in their lives. For me, it has always been my mother. She will have no issue pointing out if I am doing something incorrectly, as she states, “If anyone is going to say it, it has to be me.” A sentiment I appreciate because I do not want to end up like Kikunosuke, being laughed at when I’m not there while believing I’m some hotshot. The pure honesty expressed by Otoku (Kakuko Mori) shakes him and ultimately endears him to her.

Japanese culture values class, especially in the 19th century where this film takes place, and its presence pushes these characters. The relationship built between Otoku and Kikunosuke cannot occur because the former works as a wet-nurse while the latter comes from a prominent family name. It prompts Kikunosuke to make the big decision to leave his family in his effort to marry Otoku and improve his skill as an actor. A sacrifice of a bountiful life he lived before but one he sees fitting. It leads him to work with smaller acting troupes to get the experience, and he witnesses the hardships he could not see before when up in his ivory tower. In this journey to get better, Kikunosuke sees the struggle of those trying to act on smaller stages and minimal funding. He gets through it with the support of Otoku, but also due to his improvement as an actor, which makes itself evident in his performances.

The type of performances put on shows the acting work of a different era where men ran them and portrayed every single role. As one can imagine, much like in Shakespearean times, the men portrayed the female characters. An integral facet of portraying the female characters comes from the voice work and creating those higher-pitched melodic patterns of speech, which Kikunosuke attempts to master. Without knowing much of the history, it appears the female roles become more coveted in their era because of the range in acting necessary to portray a different sex. Something incredibly common back then and lingered for many more decades in Japanese theaters.

The connection between Kikunosuke and Otoku represents a loving and caring relationship, which defies class structures and expectations. Otouku’s support of Kikunosuke has such a genuine nature, which made her initially suggest his improvement, but also stick with him when he left the prominence he once had. It puts together a level of push and pull between characters looking for what works best in their life while simultaneously supporting each other. Just as Kikunosuke sacrificed for her, Otoku eventually returns the favor in such a heartwarming and emotionally saddening manner, which makes it clear that the feature was adapted from a novel with the literary nature of her arc. Truly a beautiful relationship of two people willing to be with one another even in the darkest moments.

This film has been touted as the finest film in director Kenji Mizoguchi’s career prior to World War II, and while I cannot state that with my lack of exposure to the filmmaker’s career, he creates something gorgeous in this film. Not only through the designs of the plays put on, but the central relationship propelling the story forward. He later proves his incredible handle of relationships and how it can create a spark that inspires his characters. It takes place in Sansho the Bailiff and Ugetsu more effectively, but his character work appears to be one of his directorial trademarks.

The Story of the Last Chrysanthemums features an incredibly touching story within a larger issue of the Japanese class system. In this system, coming from a strong family name has more worth than gold, and Kikunosuke decides to forfeit it to improve himself. Every scene of a play looks astounding with all of the moving pieces coming together in an efficient manner. This film ultimately shows we all need support systems like the ones found in this story because painful honesty will forever be much more valuable than false praise.