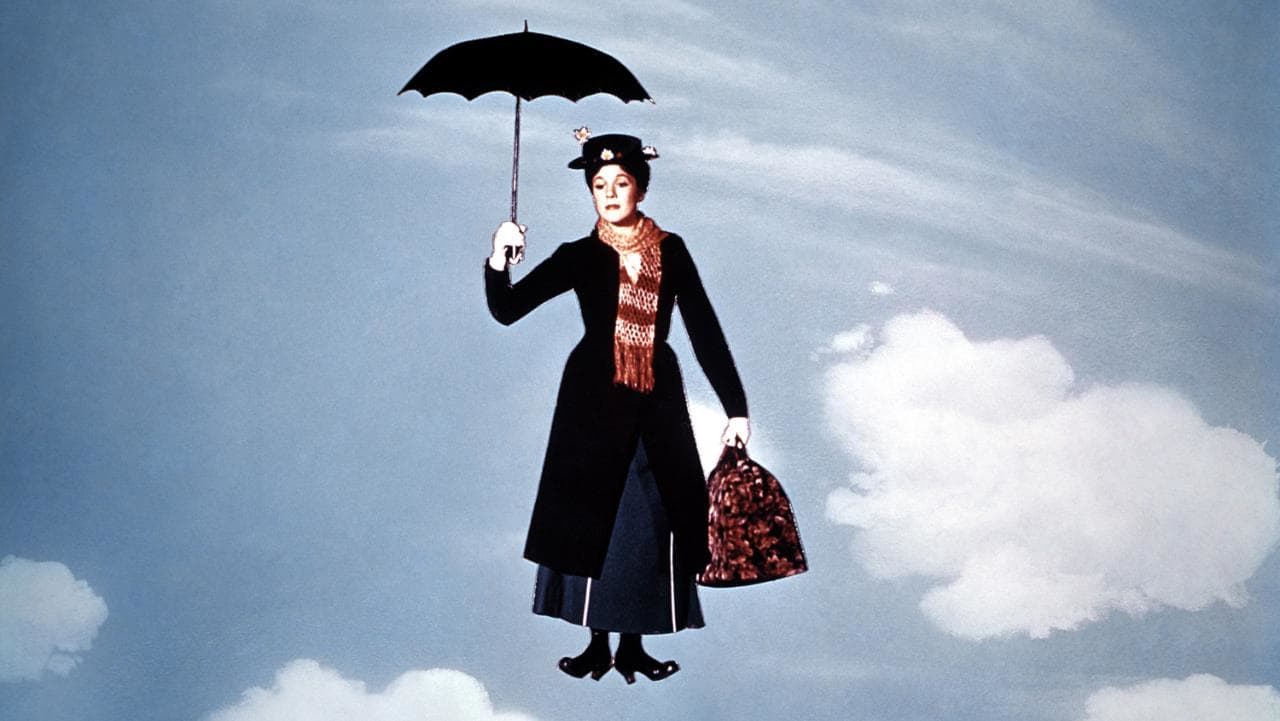 A monogamous outlook on life can lead to such unhappiness. Sometimes you need a brand new spark to enter your life and show you how a different approach makes an entire situation better. That happens to be a concern with the young children of this British family, as they run out of nannies until one who comes from the sky makes the ultimate difference in their lives.

After making every nanny they’ve had quit, the Banks family receives a visit from a peculiar new nanny who seemingly came out of nowhere named Mary Poppins (Julie Andrews). With her deceptively magical abilities, she teaches these children a lesson about family and the importance of the vibrancy of life.

There have been many famous nannies throughout the course of cinema, because of their ability to show a level of care the parents may be lacking. Julie Andrews has portrayed probably two of the best with one of them being Mary Poppins. In this role, she must find a way to take care of some rascal children who always find a way to escape and inconvenience any nanny who comes along. Luckily, Mary Poppins has the ability to use some magic and teach these kids a very valuable lesson. As with any good nanny film, the lessons apply not only to the children but also the adults involved.

So many sequences in the feature remain iconic because of the gleeful nature of them and how inventive they were. Namely, one sequence, which has stood the test of time is when they merge into a painting. In the entire sequence, the live-action characters mixed with the cartoon ones to make an immersive and colorful experience like nothing before. The interactions said a lot and it prepared for something the children have never experienced in their young lives. Whether it be dancing along with penguins or riding the horses from a merry-go-round like an actual animal. Plenty happens within the painting including the singing of the iconic song, “Supercalifragilisticexpialidocious.” An absurd word, which fits perfectly into the scenario and makes for a song no one will ever get out of their head after experiencing the film. The word itself has become famous and known by many who have never watched the film, including myself. Having only recently seen the film for the first time with the writing of this review, it astounds me how much of a footprint this film’s songs have left in popular culture.

This and many other songs make this film so special because they all push the narrative forward and carry significant meaning to the characters involved. From “Spoonful of Sugar” to “Jolly Holiday,” every song feels earned, which remains an important aspect of any successful musical. Singing most of the songs are the dynamic duo of Julie Andrews and Dick Van Dyke. Much has been said of Van Dyke’s terrible British accent, which I can confirm. He truly went for it and completely whiffed, but I respect the ambition he had with this chimney sweep of a character. He pairs so well with Julie Andrews, who puts in a phenomenal performance, which won her the Academy Award for Best Actress. With this performance, she carries such an elegance and grace about her, which makes her endearing to the adults but also an ally to the children. It makes it easy for her to deny her magical powers while also doing the work that must be done with these children.

So much stands out from this wonderful feature, which has stood the test of time. That includes Mary Poppins descending with her umbrella to the flying kite playing a major part in the story. The choreography mastered Andrews and Van Dyke displays excellent skill and wonderment as they get swept up by the music and the magic. Mary Poppins provides so much to love from every single character. Even the more evil characters have substance, as we attempt to learn what makes them the way they are. From the very beginning, the titular character makes it very clear when her departure in the story will be and it occurs exactly as planned. Certain moments have some melancholic vibes but thus is the job of a nanny. Indulge in the magic and grab a horse, as Mary Poppins takes you on a ride to expand your way of thinking and if it can bring this family together, it can do wonders for you as well.

One Reply to “Review: Mary Poppins”