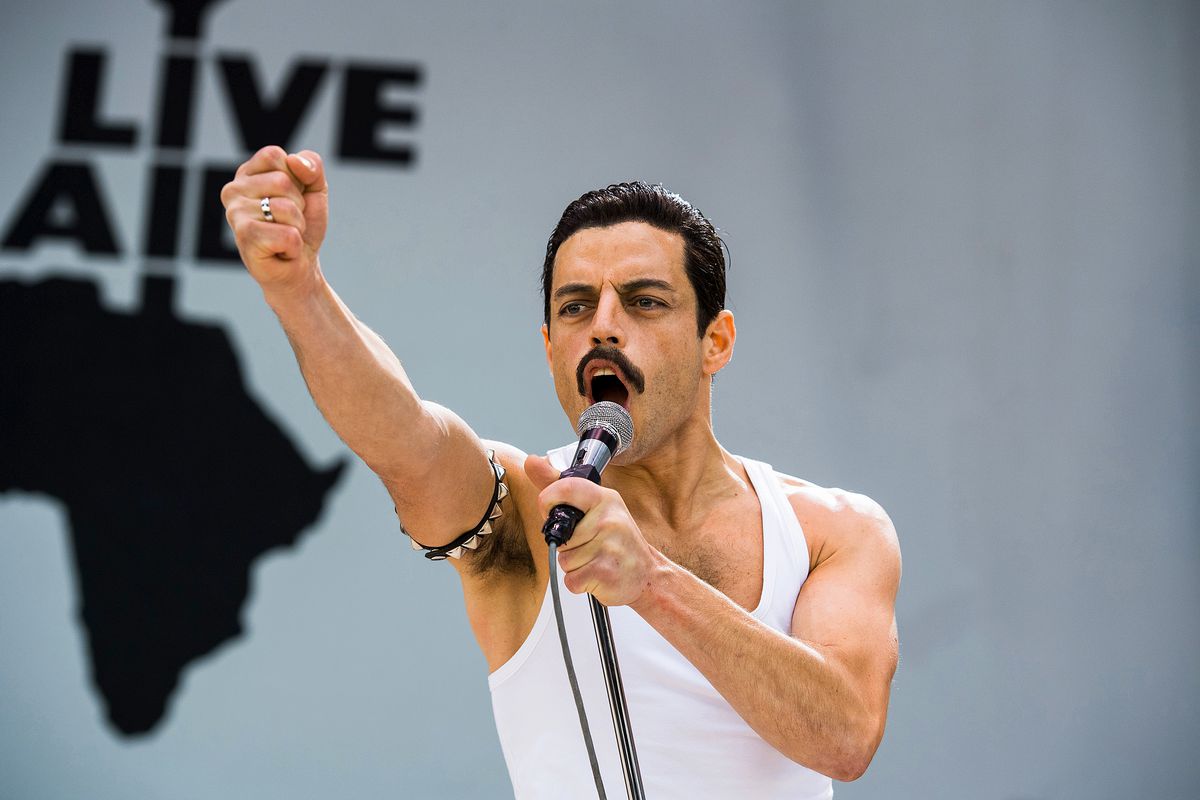 Biopics made after the subject has died leaves the door open for misinterpretation and misrepresentation of the person being profiled. It’s left in the hands of parties who may have their own self-interest if tangentially connected to the story. Instances where they overstep show the ugly side of those people and it, unfortunately, occurs in Bohemian Rhapsody, where two of the band members sought more credit at the expense of their former leading man.

Farrokh Bulsara (Rami Malek), later known as Freddie Mercury, joins a college band he has been following. Together with his bandmates, they begin to sell out shows to eventually become internationally known as the band called Queen. Throughout this journey, the band has their growing pains as they try to innovate with their music, and Freddie struggles with his sexuality.

Not many people were as captivating as Freddie Mercury when he got on stage, which has made him an icon. He deserves a movie willing to respect his journey as a person and his internal struggles, which Bohemian Rhapsody surely did not provide. Instead, it became a vanity project for surviving members Brian May and Roger Taylor to inflate their importance to the band. Through the entirety of the film, it provides countless examples of how mean-spirited it is towards a man they claim to love.

It can be seen through the incredibly horrifying editing put on display solely put together for May (Gwilym Lee) and Taylor (Ben Hardy) to look like the good guys in a story that had one real villain. Take the scene where the band meets with Elton John’s manager, John Reid (Aidan Gillen). A conversation where the whole band is present but the conversation only really takes place between Mercury and Reid. You could have been given whiplash with the number of times it cuts to the faces of May and Taylor during this discussion even if they have nothing to contribute to the conversation. It serves as a reminder of their presence in the film, in case you forgot they existed in a Freddie Mercury biopic.

There are several examples of moments I have confirmed with actual Queen fans were simply erroneous. Including making it look like Freddie was the most selfish person in the entire band by striking his own solo deal when in reality he was not the first. It’s so strange to see something meant to be a biopic turn against its own subject in such an odd way. The horrible P.T. Barnum looked much better in The Greatest Showman than the universally adored Freddie Mercury, which baffles me to no end. It makes sense this story would leave May and Taylor in such spotless lights, as they were the main roadblock to a biopic being made for a while and it’s evident with the final product, they had a heavy hand in what the story representing this band would be in a negative sense.

The worst moments came when handling Freddie’s sexuality. It’s made to seem like exploring his attraction to men led him down this rabbit hole of debauchery from the scenes being drenched in red as if the devil is afoot. Even when showing his attraction to men is what breaks Freddie, they’re too gutless to even show anything explicit about his sexuality. Obviously, it came with the efforts to be easily transferred over to less progressive nations and their policies against LGBTQ+ representation. There’s so little in fact, the studio only had to cut a couple of minutes to eradicate any mention of Mercury’s bisexuality. This should be a concern for a biopic about Freddie Mercury.

It baffles me just how incompetent the film is on every level, even if I move away from how harsh the story views Freddie. The editing, as mentioned before, gave me a headache, but the acting just did nothing but make me roll my eyes. Rami Malek as Freddie Mercury puts on some fake teeth, lip syncs to every song, and says “darling” a bunch of times. For that, he received the Academy Award for Best Actor. A performance I felt was a parody at times but landed him the top prize any actor could be bestowed. Sure, he mimicked Freddie well in the Live Aid concert, but he did nothing interesting with this legendary figure. Instead, he had to fight off completely unnecessary fake teeth to give such a bland performance.

Other people enjoy Bohemian Rhapsody because it plays all of the hits and the final Live Aid concert looks identical to the real thing. To those individuals, I say you can just watch the concert on YouTube instead of this limp imitation. If you want to listen to the songs, just pop in the CD, record, or digital download. Indulging in this vanity project stokes the egos of two men, who must be angry at Freddie for some reason. With this film, they besmirch the most prominent figure of this group, by far, all in the name of a movie meant to shine a positive light on him. The movie is spiteful, horribly made, and directed by a vile person as well. There’s no reason to go back to this film or even think about it any longer, so I will stop. A true dumpster fire that should not have been made with the people behind it, and its blatant incompetence as a film did not surprise me one bit.

One Reply to “Review: Bohemian Rhapsody”