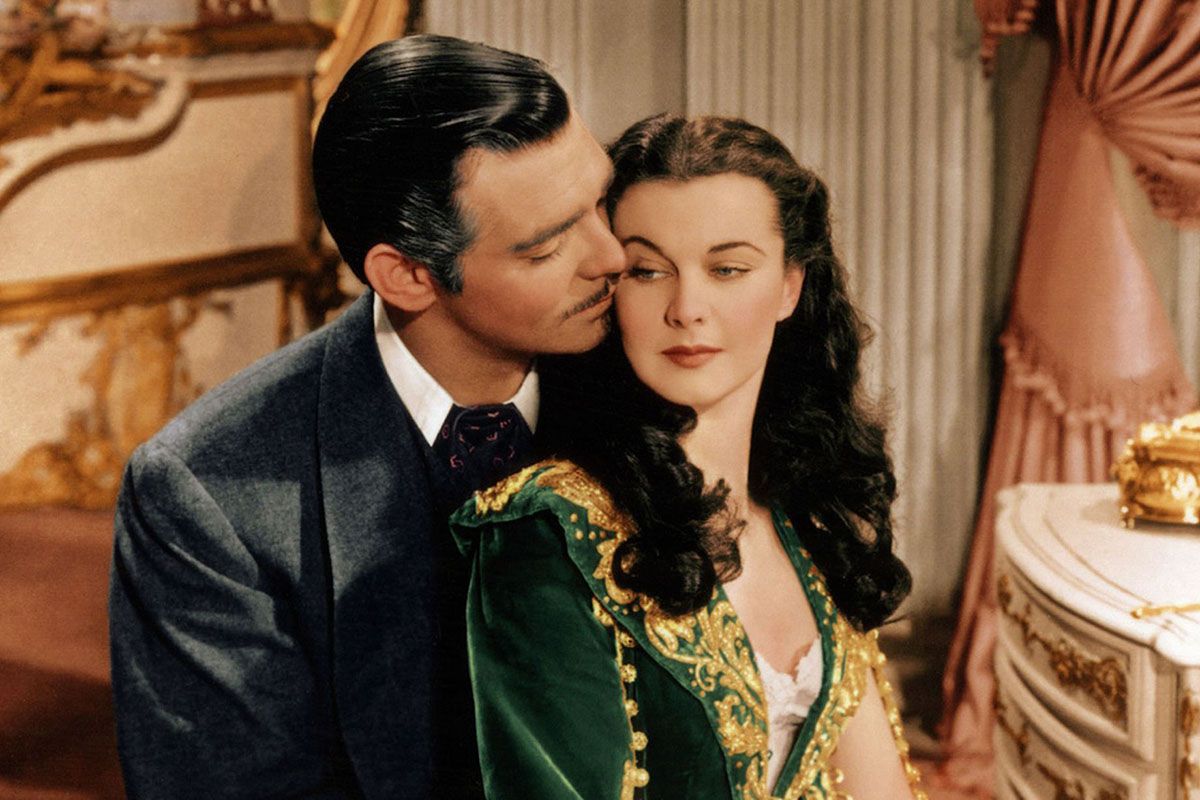 Cinematic feats serve as a piece of entertainment, but also as a time capsule of a way of thinking within a particular time. This inevitably causes some films to not age as well as societal changes alter with each passing year. There needs to be a degree of forgiveness for some films if they carried what was acceptable during a particular time, but the horrendous ideals, which were horrible even at the time, in this instance completely spoils a spectacularly made feature overall.

With the Civil War on the horizon, Scarlett O’Hara (Vivien Leigh) needs to find the opportune time to marry the man she loves, Ashley (Leslie Howard) but they never align together. Instead, she continually runs into the charms of Rhett Butler (Clark Gable). Their tumultuous relationship goes back and forth on the spectrum of hate and love as their surrounding circumstances get more and more perilous in the South.

Gone with the Wind opens with text stating how the good ol’ times are missed and has the following “Here in this pretty world, Gallantry took its last bow. Here was the last ever to be seen of Knights and their Ladies Fair, of Master and of Slave.” Starting right out of the gate for the romanticization of a time people owned other people as something we unfortunately lost. It truly just shows just how rotten this story is right from the start. It would be one thing if this film had its production begin during the Civil War but the release date arrived in 1939, over 70 years after the conclusion of this horrific time in America’s history. With this level of hindsight, the complete disregard for any humanity of the lives lost both on the battlefield and from abuse from masters could not be shaken. Shambolic to say the least and even people of the time took uproar with it getting released out to the public. The many positives, which I will get into soon, get completely overshadowed and nearly eradicated because it can have many pretty things on the outside but it undoubtedly has a rotten soul at the core.

Flowing right along with the opening horrific text comes the incredible effervescent score of this feature by Max Steiner. A truly rapturous tune playing throughout much of the runtime of this movie and it comes together in such glorious ways. It captures a sadness while also the will of the main protagonist, Scarlett as she goes through quite the journey in this epic-sized story. From multiple marriages and heartbreak, she goes through the wringer and the score goes along with her for the entire ride. Definitely the aspect of the film that remained with me when the final credits finally rolled other than the horrific racism stemming throughout the feature.

Additionally, we all know this film belongs to Vivian Leigh. Probably one of the best performances ever given by an actor, she takes the heavy melodrama of this feature and harnesses it to unleash her greatness. Whatever issues I have with this feature, I can take nothing away from what Leigh accomplishes with the character of Scarlett, as it truly speaks to her genius as a thespian. Helping craft both a rootable protagonist and someone incredibly flawed in their approach to life, Leigh holds the pain and anguish of this character with incredible grace and certifiable greatness. What she represents in the story certainly may be problematic, as she tries to hold up the racist patriarchal system she grew up with throughout the feature but she remains incredibly captivating throughout.

Standing at nearly 4 hours, this film certainly asks for plenty of time to flesh out its story, which almost stands as a testament to this being so long and being a straight-up drama. This typically gets held up for films with plenty of action but this film truly went for it with the exorbitant runtime and does it earn it? Well, I typically judge this by whether or not I continually check how much time is left and if I feel exhausted, in a bad way, when the final credits roll. Well, Gone With the Wind landed on the negative side on both of these aspects. The narrative and the bigger thematic picture could not fully maintain steam throughout the nearly four hours it asks from the audience. Vivan Leigh could only do so much to carry the feature’s success.

For everything this film has for its positives, which are plenty, in my conscience, I cannot possibly give this film a positive review or score. It contributed to a revisionist look back at the Antebellum South not even in a neutral way but essentially wishing for it to come back as some beacon of when times were good. Horrendously gross and while I love Leigh’s performance and the marvelous score, this film cannot have my affection. I’m glad I’ve seen it for historical purposes but it can go in the trash.