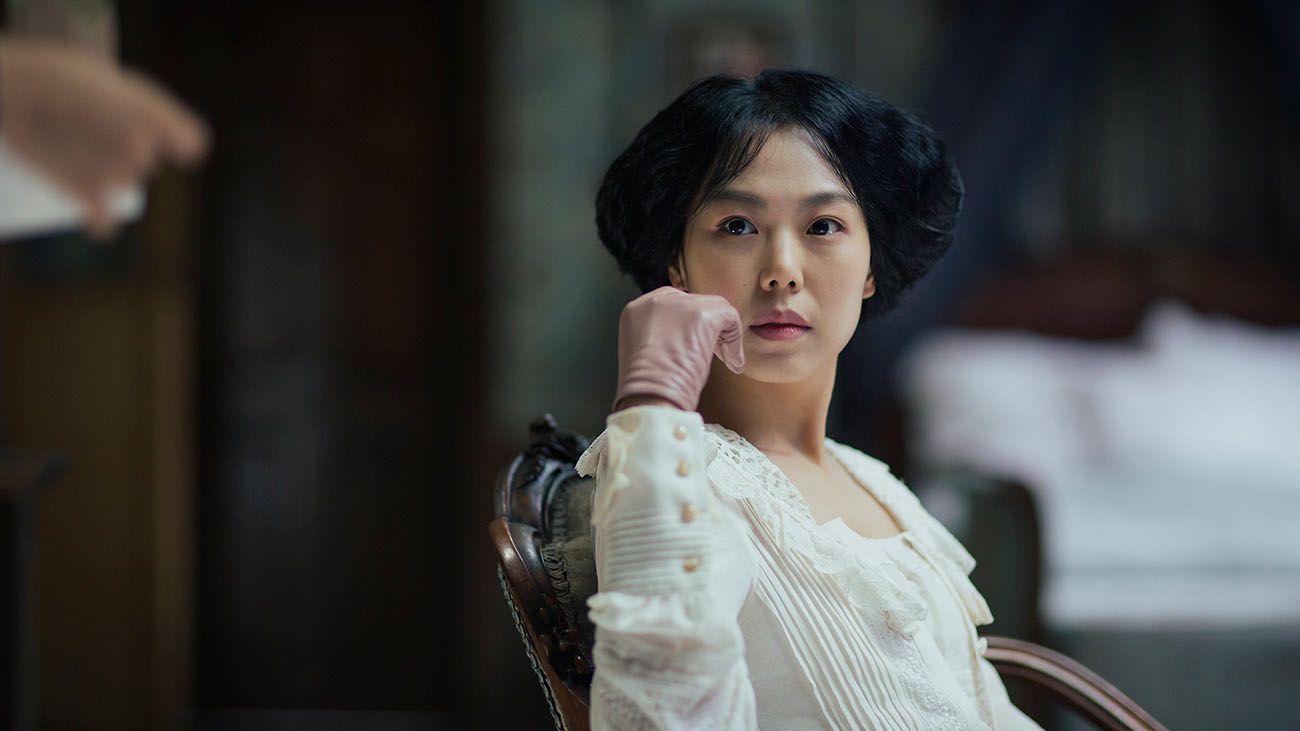 Common thief and pickpocket, Nam Sook-hee (Kim Tae-ri) gets approached by another conman, Fujiwara (Ha Jung-woo) about a scheme that will bring them both many riches. It involves posting as a maid and rich man to entice a woman sitting on a large inheritance for the taking, Izumi Hideko (Kim Min-hee). They hope to work together into having the lady marry Fujiwara and then manufacture a way to steal every penny she owns. A plan going in their favor until some wrinkles get exposed.

Speaking on The Handmaiden comes with a bevy of challenges seeing as many of its themes result from the incredible reveals it has in store for the audience. Surprises I would not want to deprive anyone of experiencing firsthand. Everything in the film feels so rich either from its visual texture but also the messaging it wants to relay about sexuality, alliances, and suppression in a manner that becomes incredibly thrilling. The narrative changes directions on more than one occasion not only to fool the audience and the characters but also to make a distinguishable point regarding the options women had during this time.

Taking place outside of modern times, men and women had different potentials of what they could possibly do in the world. This comes not from talent, but more so the patriarchal system at play. At this time, women were merely the property of the men in their lives, which informs the decisions made by Sook-hee and Hideko throughout this feature. It essentially becomes a game of who has the best cards and when they can strategically put them down to get an advantage over the other. Manipulation at its finest and no matter what endgame, riches, freedom, or sexual attraction represents the end of the rainbow here, no alliance can be trusted for too long.

Throughout the narrative, there is plenty of sexually explicit content not only shown but also described to show the depravity of men and the desires of women. This gets drilled in more with the romance and sexual relationship kindled up by Hideko and Sook-hee as it goes from a level of sweetness and care held between them to an all-out sexual attraction they can barely control when alone in a room. This sure complicates the plan Sook-hee made with Fujiwara in the beginning, but that only signifies the beginning of the wrinkles within this feature. The romance of the two women comes from a male gaze perspective at points, which would make some uncomfortable watching, but there lies a beauty in an exploration of pleasure these two undertake with one another that really gets to the heart of the film. This becomes so necessary when compared to the more sadistic and perverted aspects the feature has to offer.

Not to say all of the men in this film are pigs, but they essentially are, especially when looking at Hideko’s uncle, Kouzuki (Cho Jin-woong). A man who has kept his niece in his house since childhood for nefarious reasons and when it gets revealed to the audience, it just gets downright sickening. This factor becomes the entire point of the inclusion of characters of Kouzuki and what the other men come to do when visiting his manor. So much can be said about these gatherings, alone, but I could not dare to spoil it for anyone because it’s quite an unexpected experience. Everything seen in the manor demonstrates why Hideko would strongly prefer to leave, to put it mildly, and only continues to raise the stakes in such a highly tense manner.

In a visual sense, The Handmaiden is absolutely marvelous from the deep contrasts and capturing the luscious surroundings of this manor. The first shot of the entire film nearly took my breath away from the richness of the colors and it only got better as the narrative moved forward and things got dicier and darker. From the radiant sunlight illuminating the outdoor spaces to the dark rooms where all of the depravity occurs, this film has so much to offer in a visual sense with no issues depicting the women for all their beauty and the men for their horrid perversion.

Acting-wise I would love to give flowers to all of these actors for the sheer greatness they put on display. The shifting perspective of the narrative gives each of them a chance to shine in the light, but I must give credit to Kim Min-hee for her portrayal of Hideko. Our perspective of this character changes on more than one occasion throughout the feature and Min-hee sells every single part exceptionally. From the virginal sexually suppressed lady to also having her own nefarious intentions when these two thieves come looking for her trust and affection. She wistfully navigates everything and wraps us around her thumb with the work she puts in here. Absolutely captivating.

South Korean cinema would just not be the same without Park Chan-wook and my goodness did he provide audiences with a feast in this feature. This man knows how to put together compelling, thrilling, and riveting narratives that always keep me guessing. Each time I think I know exactly where he’s going with his stories, he still manages to pull the rug from under me. His particular brand of storytelling always comes across as refreshing because he has no issues showing the raw nature of humanity at its lowest and also unafraid to be sexually explicit in his depictions. A combination ensuring all of his films are must-see events, much like this one.