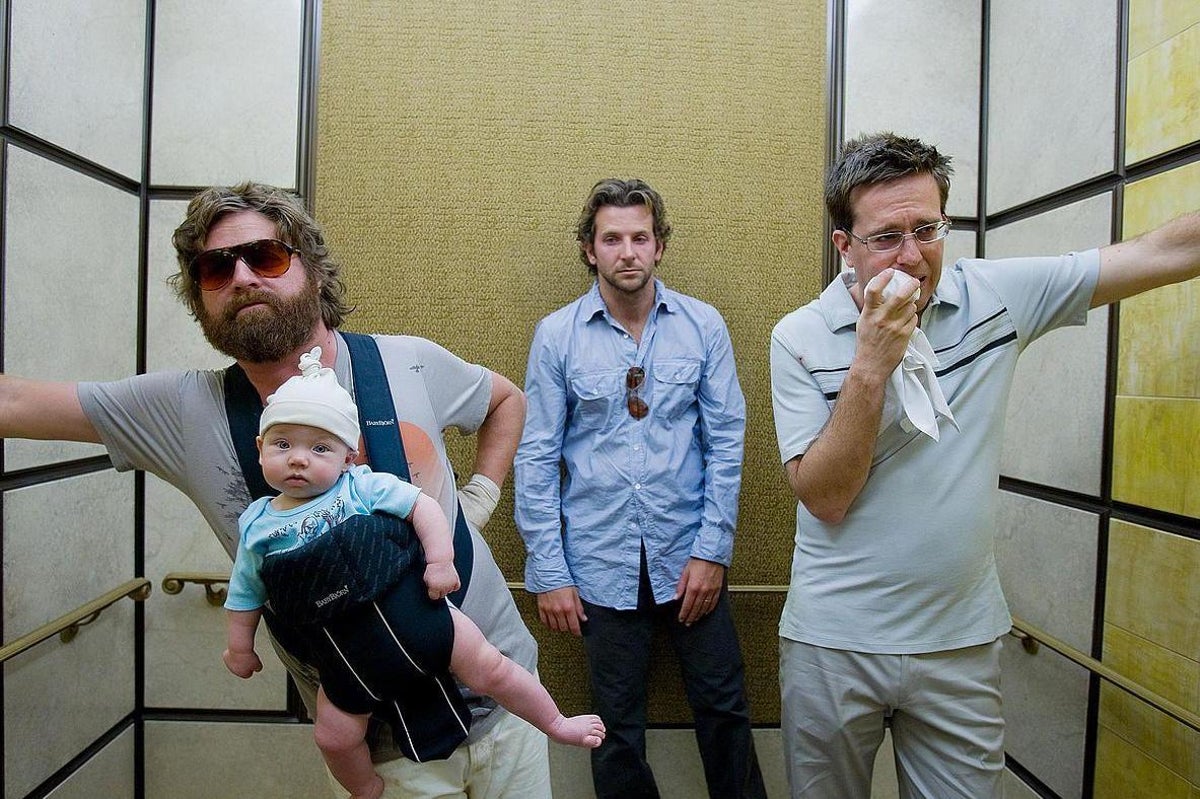 Major United States cities have their own reputation for what it means to both residents and tourists. New York promises world class pizza and plenty of history while Miami guarantees excellent Cuban food and wonderful beaches. For the sake of The Hangover, it follows the idea of everything happening in Las Vegas staying there and no other film captures this very sentiment more than this one for better and for worse.

With Doug (Justin Bartha) getting married, he heads to Las Vegas with his two best friends, Phil (Bradley Cooper), Stu (Ed Helms), and his future brother-in-law, Alan (Zach Galifianakis). After a night of partying they wake up the following day not recollecting any of the previous evening’s events and somehow missing Doug. As the wedding day gets closer, they try to retrace their steps in order to find Doug.

Las Vegas has built a reputation of being a place where lurid bachelors get trashed, leave a large mess, and then go back to their lives covering up whatever occurred there. The Hangover represents the amalgamation of this idea and the ridiculousness of it all, but unfortunately it falls into the trap of lacking any stakes and then not really following it up with consequences for these characters. Maybe it falls in line with the reality of people going to Vegas, but it does not make for a satisfying narrative to follow.

In the search for Doug there are three distinct characters with personalities one will either love or loathe. Phil has the asshole personality Bradley Cooper perfected back in the 2000s, Stu lives a stable life yet gets pushed around by his girlfriend, while Alan hass his eccentricities and wants to be like Phil so very much. Each of them provides comedy in the way they react to things. Well, most of them come from Alan being a weirdo and then Phil and Stu reacting to it in their asshole ways. These reactions pretty much sum up the type of comedy on display in this movie. It revolves around either humiliating or insulting the other characters and if it’s something you can vibe with then it makes for a great fit.

Personally, I found myself a bit mixed on the humor. Many jokes have not aged and some probably aged poorly the second it hit theaters. The one where Phil calls out for Stu using a homophobic slur, under no context is funny and really starts out the film in a jarring way. When the humor reaches its height comes from Galifianakis and his portrayal of Alan. Desperate to be friends with the other two, Galifianakis captures this sad puppy dog look, where it becomes so sad when learning he ultimately was responsible for the madness occurring the previous night. Alan lives in a different world at times while the others, like Stu and Phil, try to get things back to homeostasis and get their way back in time for the wedding.

With the jokes slightly landing more than it misses, the plot offers a look back at some regrettable decisions made by these adult men while indulging in everything Las Vegas has to offer. From strip clubs to close proximity to Mike Tyson’s house in order to steal his tiger. It becomes a race to get to their earliest memory prior to blacking out and things just continually get weirder as they search for the past continues. The absurdity of it all brings the humor as well as you realize what carnage a schoolteacher, dentist, and strange man can cause in Sin City. While we’re on the topic of their professions, there’s no way Phil is actually a teacher, right? I mean, it sets up a joke at the beginning where he blows off a student trying to ask him a question as he heads out and then later recollects how to get out of a jam. I understand not all teachers are saints but a man lacking in almost any level of human empathy cannot possibly work a job where he’s underpaid to take crap from students all of the time. There’s absolutely no way.

With all of its warts, of which there are many, The Hangover remains a seminal comedy of its time in both what type of crude humor ruled studio comedies back in the late 2000s. Many of the jokes feel incredibly out of date and needlessly mean, but then there are the incisive ones that cause a real laugh. This film also features Heather Graham so it automatically hits positive status as a result. Sorry, I don’t make the rules around here. But in all seriousness, it’s a well-made comedy with some unsavory elements to it but nails the type of tone it needs to remind the audience of the truly wild nonsense someone can engage with while in Las Vegas, and assuredly make the locals hate you.